The A to ZZZ of curing insomnia 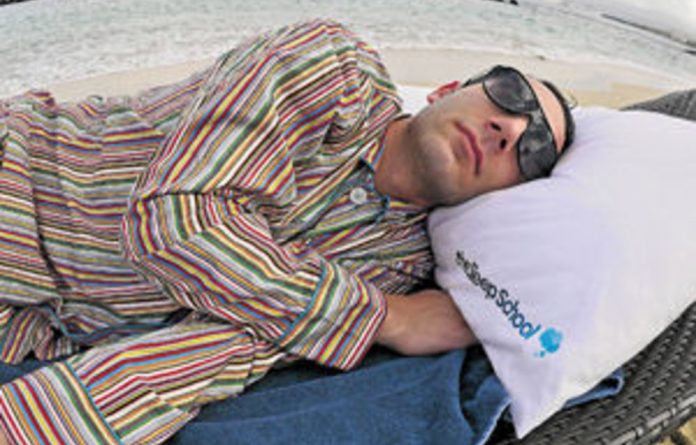 I have a dream. A dream of a decent night’s sleep. Not necessarily the hallowed, undisturbed eight hours — just six consecutive hours would do nicely. But for most of last year even that eluded me. For months I would wake, heart pounding, in the dark predawn hours for no discernible reason, soaked in sweat, unable to return to sleep.

Until I met the man of my dreams. Guy Meadows is the best person with whom I have ever slept. I would say that he opened my eyes to an entirely new world — if it was not that he had done exactly the opposite.

My name is Jonathan and like six million other Britons I am an insomniac. I have not always been like this. For much of my life I would sleep like an anaesthetised patient on an operating table. My friends jokingly nicknamed me “Somnio” for my “superpower” to sleep anywhere, at any time: sofas, buses, trains and even, on one memorable occasion, a round trip on a ski lift.

But about nine months ago, after a near-simultaneous one-two-three of major life events — getting married, buying our first home and a family bereavement — somebody sneaked kryptonite into my pillowcase and my superpower was gone.

Since then I have tried countless “solutions”, from hot baths to a cold thermostat. I have gone through three different types of eye mask and an entire menu of herbal teas. I have bought new pyjamas (soft) and a new mattress (hard). I have even tried a brainwave-monitoring headset called a Zeo and slipped between the sheets looking like Rick Moranis in Ghostbusters. But however I approached it, the doorman at the entrance to the Land of Nod simply shook his head.

Cue Meadows, the “sleep doctor”, who last month established the week-long “Sleep School” on the Caribbean island of Grenada.

The other 20 students, who had travelled from across the world for Sleep School’s inaugural week at the start of December, had also exhausted all their other options — pun entirely intended.

The battle lines were drawn: our showdown with the sandman was to take place just a stone’s throw from the beach at LaSource, a holistic resort on the sleepy southeastern coast of one of the Caribbean’s sleepiest islands.

“People have become very good at sleeping very badly,” said Meadows, as we pulled up wooden chairs for our first session, forming a rough semi circle in the pavilion that would be our place of learning for the next five days. “Good sleepers don’t have any rules. You ask them what they do to get to sleep and they’ll say ‘nothing’. You ask an insomniac what they do and they’ll say ‘everything’.

“Sleep is a natural physiological process. Our bodies know how to do it — we are just getting in the way.”

Looking around the sun-drenched pavilion as my classmates introduced themselves and their own issues, I was a bit wary. Where were the shiny state-of-the-art machines, the comforting leads, wires and computers to analyse our sleeping patterns and return them to normal? There was not a single pot of pills in sight. All we were given was a 50-page workbook with blank spaces for our homework each night.

As if from thin air, Meadows whipped out a length of rope. Beckoning me to the centre of the class, he offered me one end of the rope before gently pulling on the other, as if warming up for a bout of tug-of-war.

“What’s your natural instinct when I pull?” he asked. “To pull back,” I replied, doing exactly that. “Fine, but how much energy are you using in the process?” he asked as I placed my feet shoulder-width apart and felt my triceps straining. A lot. He was stronger than he looked. “What if you simply let the rope go? How much energy would you be using then?” he asked. Obviously none. “So what do good sleepers do to get to sleep? Nothing; insomniacs do everything.”

This metaphor is at the heart of his approach to insomnia. To win the battle once and for all, he said, we had to stop fighting. His system — which he claims has an 87% success rate — is based on acceptance and commitment therapy. This is a process of “welcoming” your problems, accepting them and then watching them lose their power and drift away. It is diffusion by defusion.

“The harder you try to fight insomnia, the more you fuel it,” said Meadows. “Instead you need to embrace it. Think of it as a patch of quicksand: the more you struggle with it, the deeper you sink.”

I was not particularly convinced. Does dropping your end of the rope not mean you have automatically lost the bout of tug-of-war? But, I reasoned, at least this approach was something I had not tried before. Plus, I was sick of going to bed looking like Rick Moranis.

Meadows, who has a PhD in sleep disorders, has devoted the past decade to this field. “The real solution,” he repeated, “is to accept the situation. And the best way to unlock that is by practising mindfulness.”

Through a number of targeted exercises, including the analysis of a single raisin in painstaking detail, he introduced us to this concept. In a nutshell, it is about becoming acutely aware of your immediate surroundings through your five senses. In this way you become an “observer”, distancing yourself from troublesome thoughts. Or, as Guy put it, “you move from the subjective into the objective and from there into sleep”.

Sleep School
Sleep School consists of five two-hour classes over five consecutive days and, although it does seem somewhat flashy to fly to the Caribbean to experience it, there are a number of positives to tackling insomnia at a resort such as LaSource. “This is the optimal learning environment — completely removed from the everyday stresses of life, with abundant relaxation all around you,” said Meadows.

It sounds corny, but he was right.

One of the final parts of our course involved a detailed look at something called the amygdala: two walnut-shaped and sized bumps at the back of your head that are key to your brain’s emotional function.

“Your amygdala evolved to notice looming threats, such as lions or tigers, then flood your system with adrenaline and cortisol to help you fight them,” said Meadows. “It’s like a rev counter. The problem comes when you’re under lots of stress and your amygdala keep getting pushed into the red. If this happens too often, your body adapts and thinks it needs to stay there permanently. And that means your system is flooded with adrenaline and cortisol when it doesn’t need to be.”

This all made perfect sense. More than that, it was reassuring to know that I was not a freak; my walnuts were just a little … overactive.

Then, on night four: a breakthrough. As usual, I woke up at about 4.30am, but before reaching for my iPod, accepting that I would not go back to sleep, I concentrated hard on being “present”. On feeling the bed under my body, on the sound of the fan above me, on the ocean outside my balcony. And somehow there was no jagged kryptonite under my head any more. The next thing I knew, it was 9am and I had missed my yoga class.

The final day of Sleep School was incredibly positive. Almost everyone felt they had made progress of some kind, even those who had struggled with insomnia for more than 40 years. Guy waved us off outside the resort and it was as if he was casting one final spell: I slept for the entire plane journey, all the way to London. Somnio was back. But it did not stop there. Soon after my return I earned a “tenner”: 10 hours of beautiful, undisturbed slumber. —