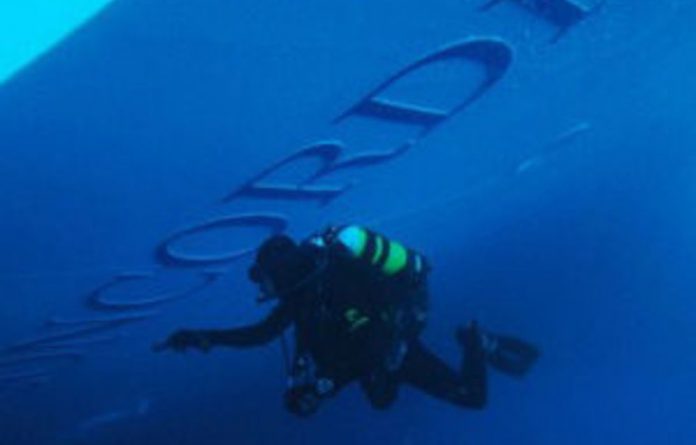 The vast wreck of the Costa Concordia shifted on its undersea ledge on Friday, forcing a new suspension of rescue work and threatening plans to pump oil out to prevent an environmental disaster.

Firefighters’ spokesperson Luca Cari said rescue squads hoped to resume operations and carry on their search throughout the night after the liner appeared to stabilise.

A week after the 114 500-tonne ship ran aground and capsized off the Tuscan coast, hopes of finding anyone alive have all but disappeared and the cold waters around the vessel have become rougher with worse weather expected at the weekend.

“We decided to allow the search to restart because all the movement was slowing very quickly,” said Nicola Castagli, a University of Florence geophysics professor who is supervising the delicate instruments that measure movements on the wreck.

The movement was only of a few millimetres an hour but had complicated the work of divers — already hampered by poor visibility, floating objects and underwater debris.

The government declared a state of emergency for the area, a technical move that would release special funds.

Attention is now turning to how to remove some 2 400 tonnes of fuel from the vessel, which lies on its side on a rocky shelf in about 20 metres of water off the little island of Giglio and which could slide off its resting place.

Facing environmental disaster
Salvage crews are waiting until the search for survivors and bodies is called off before they can begin pumping the fuel out of the wreck, a process expected to take at least two weeks.

Environment experts warn that if the ship’s tanks rupture and the fuel leaks, Italy could face its worst environmental disaster in more than 20 years.

“If the Costa Concordia slides further down and the fuel begins seeping into the water, we could be talking years and dozens of millions of euros before it can be cleared up,” Luigi Alcaro, head of maritime emergencies at the government’s environment agency ISPRA, said.

Environment Minister Corrado Clini told Parliament on Thursday that he had instructed the liner’s operator, Costa Cruises, to take all possible measures to anchor the ship.

He said there was a risk that the ship could sink to 50 to 90 metres below the rock ledge on which it is caught, creating a major hazard to the environment in one of Europe’s largest natural marine parks.

Eleven people are known to have died out of more than 4 200 passengers and crew aboard when the ship struck a rock just metres from the shoreline, tearing a large gash in the side of the hull. Twenty one are still unaccounted for.

Rescue workers are still looking for a missing five-year-old girl and her father.

The ship’s captain, Francesco Schettino, has been placed under house arrest, accused of causing the disaster and then abandoning ship before the evacuation was complete.

Shifting the blame
His lawyer says he has admitted bringing the ship too close to shore but denies sole responsibility and says other factors may have played a role in the accident.

The ship’s operators have suspended him and said they considered themselves an injured party in the accident, which industry experts say could turn out to be the biggest maritime insurance claim in history.

But in his home town of Meta di Sorrento, near Naples, the captain won some sympathy.

“I know him by sight and by reputation. He’s always been serious and capable,” said 27-year-old Giovanni Barbato, an orthodontist, who said many in the town had been deeply offended at the way Schettino had been portrayed in the press.

On Thursday, SkyTG24 broadcast a tape of what was described as a conversation between coast guard officials and the bridge of the Concordia which appeared to show officers telling authorities they had suffered only a power cut, more than 30 minutes after the ship’s impact with the sea bed.

In an interview with the daily Corriere della Sera, the chief executive of Costa Cruises criticised Schettino for delaying the order to evacuate and denied he had been pressured to wait because of the potential cost.

“I assure you … that no one thought in financial terms. That would be a choice that would violate our ethics,” he said. He denied knowledge of captains sailing dangerously close to shore to provide a spectacle for passengers.

The Italian government is considering new regulations to prevent big cruise ships from taking risky routes and passing too close to islands or shorelines. — Reuters