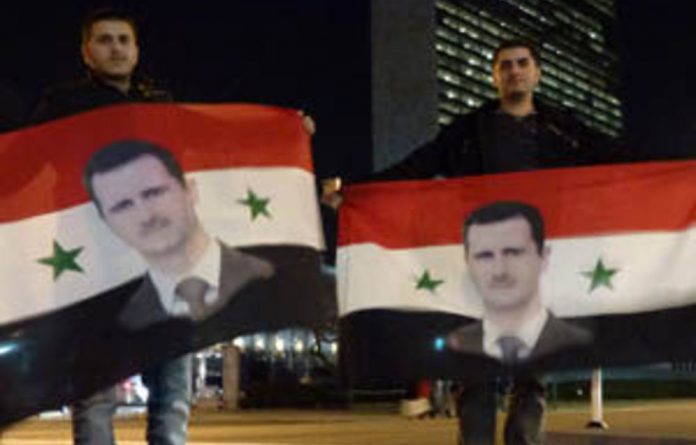 Russia looks set to oppose a crucial joint Arab and Western attempt at the United Nations Security Council to force President Bashar al-Assad of Syria to step down, as the escalating crisis saw further bloodshed with government forces battling defectors near the capital, Damascus.

Hours before the start of a tense debate at the UN in New York, Moscow made clear that it would resist attempts to force the Syrian leader to go while simultaneously appearing to hold out the possibility of a compromise. The UN says 10 months of unprecedented violence has claimed at least 5 400 lives in Syria.

In one official statement, Russia warned that the diplomatic drive risked pushing its longstanding Arab ally down the “path to civil war”, though in another its foreign minister, Sergei Lavrov, said that Assad remaining in power was not a “prerequisite” for solving the crisis.

Britain, backing a UN resolution that closely follows a plan drawn up by the Arab League, sent William Hague, the foreign secretary, to New York to take part in a debate it regards as vital to galvanise international action on Syria, the bloodiest current chapter of the uprisings of the Arab spring.

Hillary Clinton and Alain Juppé were representing the US and France.

‘Grave concern’
Hague also stressed that the UN text did not call for Western or Arab military intervention, unlike last year’s resolution on Libya, which led eventually to the overthrow of Muammar Gaddafi and which still rankles with Russia.

The draft expresses “grave concern” over the bloodshed, and “the continued transfer of weapons into Syria, which fuels the violence”, and calls on member states “to take necessary steps to prevent such flow of arms” — a clear message to Moscow, Assad’s principal supporter on the world stage and main source of arms.

“The resolution does not propose imposing change on Syria from outside,” said Hague. “It calls for the Syrian people to be allowed to make their choices. It does not call for military action and could not be used to authorise it. It does not contain coercive measures.”

Lavrov argued that opposition to the resolution did not imply support for Assad’s regime and reiterated that Russia was motivated by its objection to meddling in the domestic affairs of sovereign nations. The decision on Assad’s fate must be made “by the Syrian people”, he told journalists on a visit to Australia.

Analysts and diplomats say Russia could yet soften its stance by abstaining or, much less likely, voting for the draft — if a clause banning the use of force were introduced. The draft currently emphasises “the need to resolve the current crisis in Syria peacefully” but does not explicitly exclude future military action. Negotiations are to be held on Wednesday ahead of a vote on Thursday. China, which also has a veto, would probably follow Russia.

The fight over dealing with Syria is a perfect cauldron of Russia’s main foreign policy concerns: anger at what it sees as a unipolar world led by the United States, a belief in the inviolability of national sovereignty, and an attempt to hold on to Soviet-era allies and customers that are increasingly few in number.

The main official narrative inside Russia continues to be that the popular uprisings across the Middle East, like Russia’s own protests, are a US-led plot to gain influence and resources.

Balance of forces
On the ground in Syria, meanwhile, government forces continued a campaign to reclaim pockets of Damascus from rebel groups which had briefly seized them — producing dramatic and morale-boosting TV pictures for the rebels but possibly a distorted image of the true balance of forces in the country of 23-million people.

The sound of artillery and gunfire thundered throughout the afternoon in the areas of Kfar Badna and Saqba as irregulars fought street battles with loyalist forces who had earlier retaken contested areas in north Damascus.

Several dozen tanks were seen moving towards the east of the capital in the afternoon, until the past weekend a rare sight in the heart of the regime’s power base.

Opposition groups remain vastly outnumbered and outgunned in Damascus, but say they have opened up a guerrilla campaign aimed at wearing down the loyalist military.

So far there is little sign of that happening in the capital, which remains under the regime’s control and is heavily guarded by security forces whose senior ranks remain solidly supportive of Assad.

But the embattled president’s troops continue to fight a more organised opposition in the country’s fourth city, Homs, where tanks and artillery were again firing intensively into the rebel-held Bab al-Amr district. Residents of Homs, the frontline of an armed insurgency against the Assad family’s four-decade rule, say neighbourhoods are fast being emptied of families whom loyalists suspect of supporting the rebellion.

They described dire living conditions, with poor sanitation and streets that are regularly raked by gunfire.

‘So much killing’
Over the past week Syria has intensified its crackdown against what is now a full blown insurgency in many parts of the country. The nearby city of Hama has seen renewed violence, although residents told the Guardian the military had now pulled back to the city limits after four days of arrests and incursions.

“There are many families homeless here and many homes destroyed,” said Manhal Abo Bakr, a resident of Hama and a citizen journalist for the global campaigning group Avaaz. “The situation is much worse than it was last week. There has been so much killing.”

Hama was the scene of a brutal massacre carried out by Assad’s father, Hafez, in 1982, when he targeted Sunni extremists he claimed were plotting against him. Residents say they now fear a re-run 30 years later of the event that has shaped their hostility towards the regime and has become a driving force of the current uprising.

“I was with my father who was old enough to witness ’82,” said Abo Bakr. “He saw the graffiti that was written then and it is the same that is being written now. It says: … ‘Assad or nobody’.” —