And Jill came tumbling after 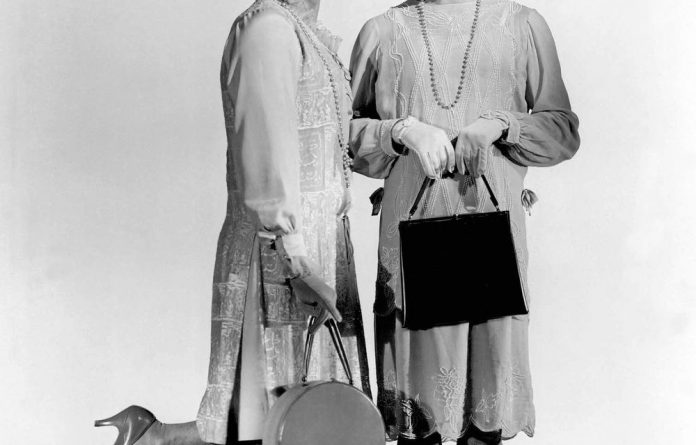 That is not news. But Jack and Jill may also mark something more significant: the moment when cinematic cross-dressing officially stops being funny.

Sandler plays both twins of the title and his Jill is pretty much what you would fear: just a screechingly irritating man in bad drag. Jill pulls lumps of wax out of her ears, leaves big sweaty patches on the bed and defecates noisily after eating Mexican food. It is funny because it is a woman doing it, you see? If you had to identify the exact ­second of comic death, it would ­probably come at the close of a scene in which Jack disguises himself as Jill (so, ­Sandler without a wig puts on a wig) to seduce Al Pacino but then the ­melons fall out of his bra.

A meteoric plummet
In 2000 the American Film Institute voted Some Like It Hot the best American comedy ever made, with Tootsie in second place, so you could say the only direction for the cross-dressing movie was downwards. But in the past decade or so the decline has become a meteoric plummet, to the extent that drag is now the last resort of the lowest-aiming multiplex mass-market entertainer.

Some of them have even made a career out of it — Martin Lawrence has three Big Momma’s House films to his name; Tyler Perry’s “Madea” alter ego has appeared in seven movies.

But for the majority their comic potency shrivelled the moment they stepped into size 10 stilettos.

John Travolta has not been taken seriously since Hairspray; Robin Williams has not been funny since Mrs Doubtfire. White Chicks and The Hot Chick scotched any notion that either Shawn and Marlon Wayans or Rob Schneider were the future of comedy and Eddie Murphy’s career is only just recovering from Norbit, in which his monstrously overweight “Rasputia” helped him to a hat-trick of Razzie awards for worst actor, worst supporting actor and worst supporting actress.

Grand old tradition
Guys dressing as girls has been a dramatic tradition long before cinema, of course. You could trace the lineage through pantomime, vaudeville, Shakespeare, Japanese Noh, Greek and Norse mythology, back to the first Neanderthal who thought it would be a laugh to try on his partner’s mammoth-skin scarf. But whereas one half of this tradition led to drag — an art form in which the performer’s wit and individuality are to the fore, in which the frock is not the whole picture — the other half has brought us to the sorry state we are in now.

Admittedly, some of the screen’s manliest actors have ticked with transvestite turns, including Cary Grant in I Was a Male War Bride, Michael Caine in Dressed to Kill, Arnold Schwarzenegger in Junior and Robert De Niro in Stardust. Johnny Depp has done it twice (Ed Wood, Before Night Falls); Robert Downey Jr did it well (that is, badly) in the recent Sherlock Holmes.

But when it comes to entire films based around drag they tend to follow a predictable pattern. It is only a matter of time before your hero-­heroine is ineptly lathering on the slap and almost giving the game away by punching people or being good at sports. There will be a scene in which a dim bloke unwittingly cracks on to our star, and another in which a desirable woman takes them into intimate, sisterly confidence.

But you can be sure that hetero-normality will be restored by the final reel.

The guy will get the girl, learn a few life lessons and forget he ever took a walk on the wild side. And all of this depends on nobody ever seeing through the cross-dresser’s subterfuge, even though it is crashingly obvious to the audience.

Face value
Cross-dressing is — or at least was — funny precisely because it plays with gender boundaries. Theorists such as Judith Butler have suggested that all gender is performative, that “male” and “female” are cultural constructs rather than biological facts and that drag is a way of subverting these tropes.

But there is little of that happening in Jack and Jill. If anything, it is the opposite. By caricaturing what is considered “unacceptable” in women, as Sandler’s Jill does, these films are actually drawing thick boundaries around what really is acceptable in women, both in terms of body and behaviour. So when men posing as women do “girl things”, it is invariably shopping, makeup and beauty treatments, just as we are invited to laugh at them for being fat, ugly and unladylike.

And you can bet there is a model of ideal womanhood somewhere in the film for extra contrast. Just as Norbit had Thandie Newton and Big Momma’s House Nia Long, Jack and Jill has the blandly pristine Katie Holmes. As the LA Times reviewer put it: “When it comes to women in Sandler’s world, he only sees extremes: hot or not, worthy of putting on a pedestal or getting hit with one.”

African-American entertainers who have cross-dressed, meanwhile, have been further criticised for producing racist caricatures. Chris Rock and Spike Lee have both spoken out against Perry’s Madea, and Ebony editor Jamilah Lemieux wrote in an open latter to Perry: “I just can’t quite get with seeing Mother Dear played by a 6ft 3in [1.9m] man with prosthetic breasts flopping in the wind. Our mothers and grandmothers deserve much more than that. Heck, our fathers and grandfathers deserve more.”

This joke isn’t funny any more
Perry and Sandler’s get-out clause would be that they are laughing at themselves, rather than at women in general. But the world is not laughing with them any more.

If Sandler has not killed the transvestite comedy, though, then Work It should finish it off. This new American sitcom once again rolls out the cross-dressing clichés on the supposedly timely but extremely shaky premise that women are now taking all the good jobs, thus forcing its male stars to drag up. “To stay employed, Lee and Angel must put aside their alpha-male selves and learn to navigate their all-female workplace,” the press blurb says. You can guess the rest.

Reactions to Work It have ranged from “an early frontrunner for the worst show of 2012” to “a retrograde shame-spiral of a series that hates women nearly as much as its viewers will hate themselves”. The show has also drawn criticism from another quarter: transgender groups. In December, the Gay and Lesbian Alliance against Defamation (Glaad)as well as Human Rights Campaign took out a full-page advertisement in Variety stating that “Work It Doesn’t Work”.

“By encouraging the audience to laugh at the characters’ attempts at womanhood, the show gives licence to similar treatment of transgender women,” it read.

“In 34 states you can be fired for being transgender,” says Herndon Graddick, Glaad’s spokesperson, “so rather than having an easier time, which is what the show ­ridiculously tries to portray, trans people often have a very hard time supporting themselves.”

Does that mean cross-dressing in film and TV shows cannot be funny any more?

“One could ask the same about blackface,” Graddick sayss, “which has been a staple of comedy for centuries. People have a more intuitive sense of where and if that might be appropriate, and if it were to be done now it would be with great sensitivity to the issues at play. We’re not saying that you can’t ever be funny about these things, obviously. But people have become more aware of all the pieces of the fabric of society, transgender people included. So Work It has the double problem of a more sophisticated audience and a less sophisticated product.”

Different for girls
When cross-dressing is done the other way round, however, the results are generally far more revealing. Several female actors have won, or been nominated for, Oscars for male impersonations: Julie Andrews in Victor/Victoria; Linda Hunt in The Year of Living Dangerously; Hilary Swank in Boys Don’t Cry; Felicity Huffman in Transamerica; even Gwyneth Paltrow in Shakespeare in Love. Corseting up to join their ranks this year are Glenn Close and Janet McTeer, who both masquerade as 19th-century chaps in Albert Nobbs.

It would be a sad conclusion that transvestism is acceptable only when taken seriously. Done well, trannie comedies have been a great way to gently broach tricky subjects such as discrimination, gender difference and homosexuality — as with classics such as Tootsie, La Cage Aux Folles or The Adventures of Priscilla, Queen of the Desert. It’s the “done well” bit that is key, though. You can get away with anything if it is funny enough.

Given their propensity for making comedy out of social taboos of the lavatorial kind, you would think Sandler and Co could have brought more to this party than fancy dress and fat suits. Perhaps, beneath the likes of Jill and Rasputia lie the unrequited yearnings of our fading comics to really get in touch with their big, fat feminine sides. It is a shame none of them seems to have the balls. —

There are more women registered to vote than men. In response, political party manifestos have increased their attention to gender issues.
Read more
Opinion

The harsh reality is that progressive gender work in Southern Africa is being hamstrung by changing economic realities in the north.
Read more
Opinion

We’re all made in God’s image

My gender is one part of me; it is not everything of me. I’d be a fool to limit myself.
Read more
National

Now they really see me as someone who matters, thinks and feels, says activist Velisa Jara
Read more
Analysis

Gender barriers fall when men are exposed to change

​Women’s rights vs patriarchal traditions: Where does the ANC Women’s League stand?

Acquiescing to virginity testing in KwaZulu-Natal represents the start of an entrenched tolerance for patriarchy in the organisation’s ranks.
Read more
Advertising