How to grow communal land use 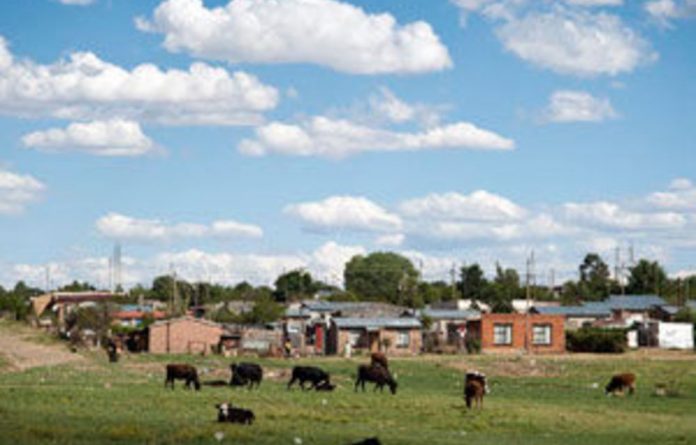 Land reform will become an even hotter topic this year as the debate revolves around whether or not to privatise communal land and what this would mean for current social and economic systems linked to the land use.

The Democratic Alliance has a private member’s motion in Parliament that proposes the privatisation of all communal land in South Africa. But a recent research report takes the opposite view and says such a move could result in an entire social and economic system falling apart.

The research, conducted in the Pondoland area north of Port St Johns by Valerie Payn, a commercial farmer in KwaZulu-Natal, concludes that people in the area value the communal-lands allocation system because they are so poor that they cannot gain access to land in any other way.

Payn says instead of ­privatisation more effort should be made to improve the productivity of communal lands.

Annette Steyn, the DA’s spokesperson for rural development and land reform, believes privatisation would generally benefit the inhabitants of communal areas, mainly because many people leave these areas to move to cities and give their land to relatives who do little with it.

Steyn says communal-area land reform received only a one-line mention in the recent green paper on land reform, even though as many as 20-million South Africans live in communal areas.
Payn and Steyn apparently agree that many people are too poor to get land, but Steyn says she has been informed of situations in which land rights were taken away when the chief was unhappy with the user. She believes the system allows for land to be manipulated as a way to control rural people.

The only way to appeal is through the tribal authority, which falls under the jurisdiction of the chief, making it fundamentally undemocratic, according to Steyn.

“Communal ownership also makes rural women vulnerable if land rights are alienated when their spouses pass away. Security of land title would not jeopardise the ­capacity of a chief to provide guidance or leadership on matters of culture and ritual.

“Little or no progress has been made to bring development to most communal areas. I believe the reason for this is that the traditional authorities and the elected councillors do not agree. We need a discussion on the rights of South Africans ‘owning’ land worth billions while remaining the poorest of the poor.”

Payn says communal land is not just about production of agricultural goods — it also supports a wide variety of other facets of the traditional way of life.

She says the land in her focus area is highly productive and heavily utilised for a wide range of purposes, including the production of food and harvesting of building and craft materials and medicinal plants.

In many instances women are the primary farmers, keeping the household alive. One woman told her: “We don’t agree with the idea of selling land. If you sell land, how will people without money be able to get hold of the land they need to grow food?

“Our system works well. You are given the land that you need to grow the food you need, so there is always enough food. If you don’t need it any more, it can be given [by the chief] to someone else who needs it.”

Payn says although livestock on communal lands has contributed to considerable environmental degradation and erosion, the training of herders in modern methods of targeted “biological grazing” — increasingly being used by commercial farmers — can achieve excellent improvements in both veld condition and stock yields without fencing or creating paddocks.

Payn says many households would starve without the food they produce, and they would not have houses if they did not have access to natural building materials. A wide range of crops is grown, including vegetables, maize and a variety of fruit trees.

Time-series mapping on the Wild Coast indicates there has been both an increase and a decrease in cultivation in the same areas. Payn says there has been a shift from large, labour-intensive communally farmed fields to smaller, less labour-intensive garden-type cultivation around individual homesteads. This may be because of the departure of men for migrant labour, the unwillingness of the younger generation to work in the fields and the end of the system of voluntary reciprocal communal work parties. She found that although fields were smaller than in the past, there were more of them.

Agriculture on the Wild Coast is still largely done for subsistence purposes and little of the crops produced is sold, mainly because of the difficulty in finding ways to market them.

One subsistence farmer told Payn: “Some of the food we grow is sold to local people, but because everyone grows their own it is difficult to sell locally. We could grow a lot more if we had somewhere to sell it.”

The function of the former trading stores as middlemen has fallen away as they have been replaced by chain retailers such as Boxer, a subsidiary of Pick n Pay.

“The old traders would barter five bags of maize for some of their goods, or they would buy small amounts of maize and store it in a silo until they had enough to sell to the mills. The chain stores no longer do this. They usually source their fresh produce in the Cape Town, Durban and Johannesburg markets,” says Payn.

Despite this, some small-scale farmers she researched did make a fair income from marketing their produce.

Payn rejects the notion that young people do not want to become farmers and the current older generation will be the last to use the land.

But she admits that “the older people are happier to do farming for self-sufficiency and subsistence. The younger generation also want crops which would generate income.”

Instead of privatising communal land, Payn believes ways should be found to improve the productive capacity of small-scale farmers and help them find markets. She agrees, however, that they should be given more security of tenure and protection against unscrupulous and corrupt chiefs and politicians.

She believes there is a strong ­correlation between the continued use of communal land for agriculture and social and community cohesion.

In places where there has been a pronounced decline in cultural traditions, traditional systems of agriculture are often in ruins.

She does not believe, however, that the breakdown of traditional communities is inevitable — and where it has occurred it can be reversed.

Land ownership and its equitable distribution has floundered. Changes to a section of the constitution and the expropriation act are now before parliament, but do they offer any solution?
Read more
Business

On the back of the announcement that the government would allocate more land to be leased by emerging farmers, President Cyril Ramaphosa says that beneficiaries will also be trained in financial management and enterprise development
Read more
Business

The agricultural sector has grown this year, but an absence of collateral is preventing black farmers from making a go of their business
Read more
National