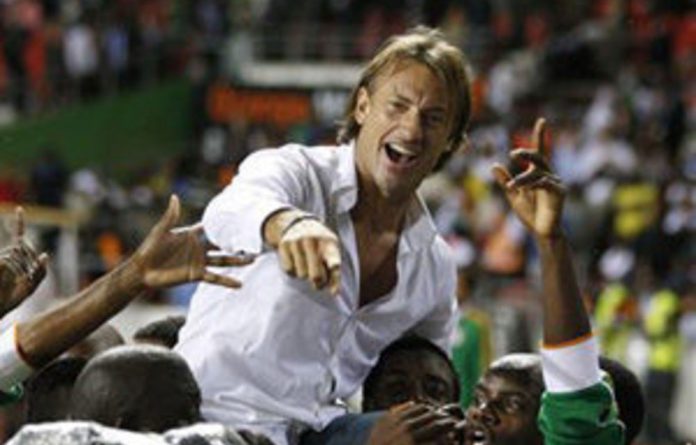 Zambians poured out of their houses, clubs and bars to celebrate in the streets early on Monday after watching their team beat Côte d’Ivoire 8-7 on penalties in the Africa Cup of Nations finals.

It was a bittersweet victory in Libreville, Gabon. Last week after arriving for the finals, Zambia’s current players laid flowers on a stretch of sand in Libreville not far from where a Zambian military plane crashed into the ocean soon after takeoff in 1993, killing 25 players and officials on board as well as a state news agency sports reporter and the military transport plane’s crew.

Back in 1993, state broadcasters interrupted normal programming to announce the crash in the country’s eight languages. In Lusaka, the capital, men and women wept in offices and on the streets.

On Monday, there were only cheers.

“It is a dream come true,” said David Phiri, a plumber. Then he blew hard on his vuvuzela, the piercing trumpet heard around the world during broadcasts from the World Cup in South Africa in 2010.

Jubilant Zambians also honked the horns of cars draped in their flag, shouted from windows, and sang football songs.

“It was written in the stars that we will be the champions,” Winfreda Muyunda said breathlessly as she ran out to join a street party that had converged in front of a Lusaka police station. Some women were in their night gowns covered by traditional cotton wrappers known as chitenge, while most men and boys were shirtless.

Zambian pride
The spontaneous street parties after the nerve-racking win were in defiance of police minister Kennedy Sakeni, who had said there would be no reason for people to leave their homes to celebrate. Many workers are hoping the government will declare a public holiday in coming days.

In the lead-up to the final, Zambians at home and abroad rejected predictions that Côte d’Ivoire would be too strong for their Chipolopolo. Fans have been partying and blowing their vuvuzelas. Traders have done roaring business in shirts, scarves, caps and chitenge in national colours, as well as national flags.

President Michael Sata gave Vice-President Guy Scott the honour of representing his government at the final. Scott was accompanied to Gabon by Kenneth Kaunda, who led Zambia to independence from Britain in 1964 and was its president for 27 years, and Sata’s predecessor Rupiah Banda. At least two plane loads of football fans took off from Lusaka early on Sunday morning for Libreville.

“The pain of that [1993] crash still lingers and we must all remember that those players perished while trying to achieve victory and honour for our beloved country,” Banda, who is a former Football Association president, declared before he departed with other members of the government delegation.

“We know what we wanted to honour this evening. It was a sign of destiny, written in the sky. There was a force with us. I think God has helped us and given us strength,” the Frenchman told a post-final press conference.

Bwalya was the one who had enough confidence to appoint Renard, then assistant to Ghana manager Claude LeRoy, as coach of Zambia in 2008, and again to re-sign him in 2010.

Renard reflected: “Kalusha was one of the best Zambian players of the last century … Then he was coach of the national team, now our president … He survived the crash, he was supposed to have been on that plane which was going to play a World Cup qualifier against Senegal … He knows how terrible this crash was for the nation … I want to dedicate this title to him, he gave me my chance when nobody knew me … With Claude LeRoy and Kalusha I have been fortunate to have met these two people along my journey.”

Team spirit
There was a moment when Zambia’s famous team spirit appeared to be fractured in Sunday’s high pressure atmosphere.

Renard remonstrated furiously with Davies Nkausu after the defender had let Côte d’Ivoire forward Gervinho bear down dangerously on Zambia’s goal. Renard then pushed Nkausu in the chest to ram home his point.

Instead of reacting angrily, the player nodded his head, patted the emotional Frenchman on the shoulder and went back to winning Zambia’s first major football title.

It encapsulated a unique bond between Renard and his players that maybe few outside the camp fully understood before Zambia’s unexpected victory.

Renard said “for you maybe it’s incredible for me to react like this, but they know me”.

Strength
Renard reckoned Zambia had been lucky to play all their games up to the final across the Gabonese border in Equatorial Guinea, explaining: “It was only possible for us to return to Gabon [to honour the 1993 team] if we made the final. That gave us incredible strength.”

Zambian midfielder Isaac Cansa said they appreciated they had achieved something enormous for the Zambian people.

“The 1993 tragedy played its role. We weren’t favourites for the competition or the final, but we believed in ourselves.”

Renard, who has joined a select club of Frenchman to win the Nations Cup, a group that includes LeRoy and Roger Lemerre, who won in 2004 with Tunisia, says his future lies with Zambia.

“It’s a fantastic country. I’m proud to bring the Cup back to Zambia.”

Even though it was Stoppila Sunzu who converted the winning penalty his teammate Rainford Kalaba had had the chance to score the decisive spot-kick after Kolo Toure had missed the Côte d’Ivoire’s seventh.

“They call Kalaba ‘the master’ because he’s such a fantastic player, but, like [Diego] Maradona or [Michel] Platini he’s a human being and is capable of missing something. This wasn’t the right time for him to miss, but luckily along came Stoppila to give us the title.”

Disappointment
Côte d’Ivoire, who yet again failed to fulfil their favourite’s tag, head back to Abidjan laden down with disappointment, coach Francois Zahoui said.

The Elephants had come to the 2012 edition with high hopes of atoning for further failures in 2008 and 2010.

But they now head home trophyless, despite having had an opportunity to claim the title in regulation time only for captain Didier Drogba to send a second-half penalty high over the bar.

Zahoui said: “The disappointment is enormous and its sadness which is the overwhelming sensation … We are very upset tonight. I was anticipating a difficult game, I knew it wasn’t going to be a walk in the park … We didn’t start well but we had occasions like the penalty to kill off the game … Then Zambia began to believe. That’s football.”

‘Golden generation’
Zambia were driven by their desire to honour the national team wiped out in 1993, but Zahoui insisted his side too were hungry to win the title for only the second time after 1992.

“The Zambians had a history but we also wanted to win this Cup … We wanted to claim the title because of the difficult situation in the Côte d’Ivoire.”

Asked if this was the end of Didier Drogba’s so-called ‘golden generation’ Zahoui said: “Off the cuff we can’t make a decision like that. The players produced a lot of effort, they gave their all … This generation went close in 2006 … We’ll have to reflect on what’s happened. We’re going to return to Abidjan and reflect on things … We have to bring in fresh blood but we’ll see about all that with the federation and take the right decision.”

He insisted there were positives to take home from this Nations Cup, despite Sunday’s defeat.

“When you produce a competition like we did without conceding one goal [in regulation time’] and score nine goals it’s hard to accept because we had one hand on the Cup … There’s a lot of satisfaction as well for us; the players displayed maturity.”

He added: “We created chances but luck wasn’t on our side. But that said, not to concede a goal in the whole competition is some feat … The penalty shoot-out is a lottery … As for the veterans we’ll have to see if they want to continue, it’s a personal choice.” — Sapa-AP, AFP