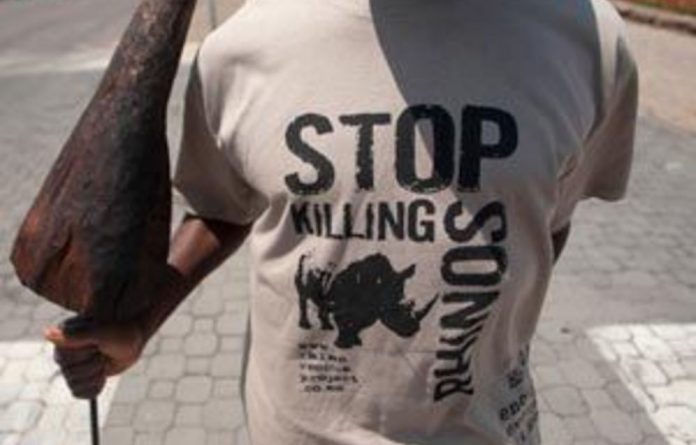 Conservation activists have threatened to push for a global boycott on South African products if the government does not immediately stop all trade in rhino horn.

In a petition delivered to the presidency in Pretoria on Wednesday, they also demanded the destruction of the state’s rhino horn stockpiles within 60 days.

Concern over the unabated killing of rhinos was spreading beyond South African borders, said Marianne du Plessis, a director of the non-profit body Section 24 Rights Coalition.

“Not only us, the people represented here, the international community is deeply concerned with the ongoing killing of our animals,” she told reporters.

“The concern also centres around our government’s lack of a strong will to stop the problem.”

Du Plessis said section 24 of the Constitution dealt with “the protection of the environment for the benefit of present and future generations”, but that there had been inadequate implementation of those dictates in the country.

“We have gathered more than 22000 signatures in this petition from South African communities and other countries across the world.

“Government has 60 days to turn around the situation or we call for drastic action, including a boycott.”

The international mobilisation of a boycott on local goods would affect agriculture, tourism and service provision sectors of government.

Du Plessis said her organisation enjoyed the support of numerous international partners, such as the International Animal Rescue Foundation, an umbrella network of institutions which advocate for nature preservation and humanitarian relief.

The activists burnt a model wooden rhino horn at the Union Buildings in a symbolic act intended to convince the government to destroy its horn stockpiles, a move they believe will save the endangered rhino.

Rian Geldenhuys, another director at Section 24, said South African authorities needed to decisively engage with their counterparts in the Asian countries to which most of the country’s rhino horns were exported.

“Government’s action will be very critical in this campaign. They cannot be denouncing trade in rhino horn and at the same time they are sitting on a large stockpile of those horns. We want those horns destroyed,” said Geldenhuys.

Head of public liaison in the presidency Mosa Sejosingoe received the petition and said the message would be delivered to President Jacob Zuma. — Sapa