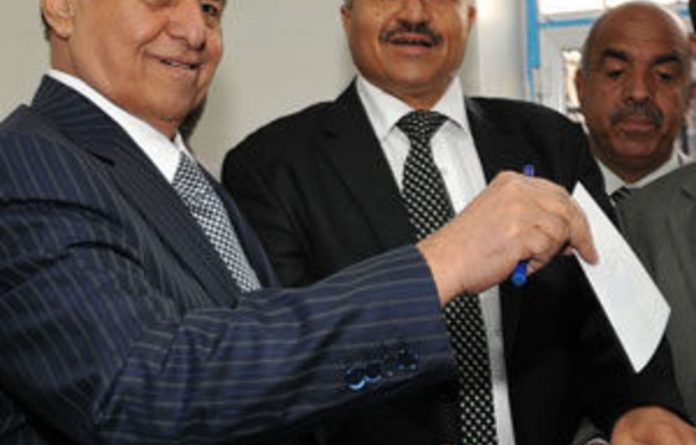 Separatist violence in the south loomed over a presidential election in Yemen that had just a single candidate, but Washington praised the vote ending three decades of rule by its ally Ali Abdullah Saleh.

The uncontested vote anointed Abd-Rabbu Mansour Hadi — a general who served as Saleh’s vice president and close confidant — as president under a deal backed by the United States, Saudi Arabia and other rich Gulf Arab states.

Hadi is tasked with implementing a power-sharing deal with Saleh’s political opponents under the agreement, which removed Saleh after 33 years in power in one of the Arab world’s poorest and most chaotic countries.

A year-long uprising against Saleh was one of the bloodiest of the revolts that have swept across North Africa and the Middle East. Saleh becomes the fourth Arab autocrat toppled in the wave of unrest that began in Tunisia more than a year ago.

He leaves behind an economy in shambles, a rebellion in the north, separatism in the south, a tenacious wing of al Qaeda, and a divided military still partly dominated by his kin.

Election boycott
In a reminder of the daunting task his successor faces holding Yemen together, violence was reported in cities across the south, where separatists demanded an election boycott.

“Elections are the only exit route from the crisis which has buffeted Yemen for the past year,” Hadi said after voting on Tuesday.

US State Department spokesperson Victoria Nuland said: “We consider it to be a very strong and positive referendum by the Yemeni people on the transition process that their leaders have agreed to.”

Washington says it wants a united Yemeni leadership as a partner in its campaign against al-Qaeda. Yemen is one of the countries that allow US forces to use drone aircraft to strike al-Qaeda militants.

Transfer plan ‘an elite pact’
The poll was denounced in advance by some of the youth activists who first took to the streets to demand Saleh’s ouster. They regard the transfer plan as a pact among an elite they see as partners to the crimes of Saleh’s tenure, including the killings of protesters.

Minibuses plastered with posters of Hadi and decked out with speakers sped around the capital Sana’a blaring out songs to shouts of “Vote to Save Yemen”.

“We are now declaring the end of the Ali Abdullah Saleh era and will build a new Yemen,” human rights activist Tawakul Karman, who shared this year’s Nobel Peace Prize, said as she waited to cast her ballot outside a Sana’a university faculty.

Voters dipped their thumbs in ink and stamped their finger prints on a ballot paper bearing a picture of Hadi and a map of Yemen in the colours of the rainbow.

High turnout would convey legitimacy
A high turnout would lend Hadi the legitimacy he needs to carry out changes outlined in the US-backed power transfer deal, including the drafting of a new constitution, restructuring the armed forces and preparing for multi-party elections in two years’ time.

But turnout, which one official estimated was as high as 80%, was hit by violence in Aden, the main city in the formerly independent south, where an election organiser said attacks forced voting to end by mid-afternoon.

“There was a boycott, and when those who were boycotting found they weren’t winning they turned to resistance and seized ballot boxes and stormed polling places,” Mohammed Hussein al-Hakimi told reporters in Sana’a. He said final election results could take as long as 10 days to emerge.

Election committee official Khamis al-Dayani earlier said nine of some 300 large polling districts were unable to begin voting for security reasons, and that an election official had been killed in the southern city of Taiz.

Southerners, who accuse the north of grabbing their resources and discriminating against them, are demanding a divorce from the north. The two regions were separate countries until they were united in 1990, and fought a civil war in 1994.

Protesters gunned down
Security forces fired on protesters throwing stones during an anti-election rally in front of a polling station in al-Hota, the capital of the southern Lahej province, killing two, witnesses and local officials said.

An officer from the Republican Guards and an armed secessionist were also killed during clashes in the port city of al-Makalla, capital of Hadramout governorate, officials said.

Gunmen attacked voting centres in the districts of Khor Maksar, Mansoura and Maala in the Aden vicinity at dawn, killing one soldier, residents said. They stole ballot boxes and set them on fire in the street.

A leader in the Southern Movement, Abdulhamid Shokri, said four civilians including a child had died in Aden since the morning as a result of clashes between security forces and people opposed to the election.

The northwest of the country is largely controlled by an insurgent group known as Houthis, whom Saleh tried to crush before a ceasefire in 2010. They have expanded their territory as central government authority crumbled, and also called for a boycott of the vote.

“These are not real elections, it is just formalising the American-backed GCC initiative which aimed to control the Yemeni revolution,” said Dayfallah al-Shami of the Houthis’ leadership council. “It is just a reproduction of the same regime.” — Reuters