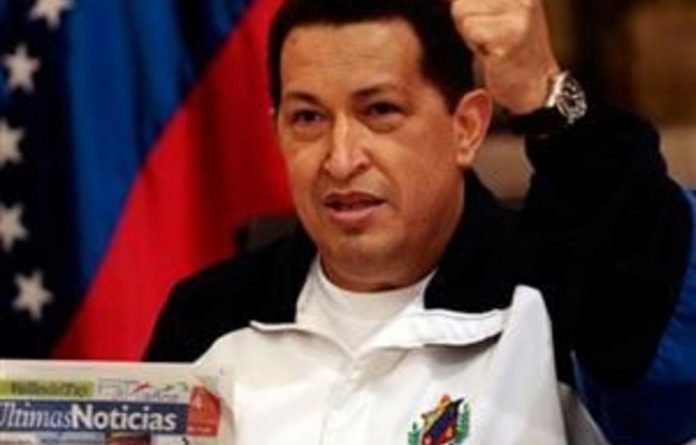 President Hugo Chávez bid an emotional farewell laced with references to Jesus Christ and independence hero Simon Bolivar as he departed Venezuela for Cuba for urgent surgery to remove a tumour he says is probably malignant.

Clasping the hand of his youngest daughter, Chávez addressed allies of his socialist political movement and troops standing at attention at the Miraflores presidential palace on Friday.

“I say this from my gut: With cancer or without cancer … come rain, thunder or lightning … nobody can avoid a great patriotic victory October 7,” the president said, referring to the date of Venezuela’s presidential election. “Long live Chávez!”

The socialist president, who is seeking a fourth term, referenced Bolivar and Christ’s burdens to describe his battle with cancer.

Chávez’s black SUV left the palace and rolled slowly through the capital, with red-shirted bodyguards clinging to the running boards. His head and shoulders sticking out of the sunroof, the firebrand president waved to onlookers lining the avenues and people flying Venezuelan flags from rooftops.

Welcomed by Castro
A motorcade of white vans and police vehicles with flashing lights followed Chávez to the airport, where he shook hands with officials and spoke briefly before taking off for Cuba in the presidential plane.

Several hours later, Chávez contacted Venezuelan state television by telephone, saying he had arrived in Cuba and had been greeted by Raul Castro at the airport.

“I have faith that everything will go well,” Chávez said.

The president said he planned to meet with doctors on Saturday, and undergo a series of medical tests.

Chávez (57) is turning to the same Cuban doctors who extracted a baseball-size cancerous tumour from his pelvic region last summer. This time, the growth is smaller, about 2cm in diameter.

Cuba and Venezuela are staunch allies, and Chávez enjoys a warm relationship with former leader Fidel Castro and his brother Raul.

Taking a risk
The Venezuelan president has not disclosed the precise location of either tumour, nor said what kind of cancer he had, but described next week’s surgery as urgent.

Cuban healthcare is generally considered good, but oncology experts not involved with Chávez’s care say he could be taking a risk by skipping more respected facilities in the United States, Europe or Brazil — which has Latin America’s most advanced cancer centers with specialized radiation equipment.

“If you have a ‘common’ cancer, that of the breast, colon or lung … then it’s going to be easy to find standards of care that are the same in the U.S., Brazil or Cuba,” said Dr. Julian Molina, an oncologist at the Mayo Clinic in Rochester, Minnesota. “The problem comes when you have a tumour that’s not one of the common ones, and that’s what most of us suspect Chávez has.”

Latin America’s top cancer doctor, Paulo Hoff, who heads the cancer center at Sao Paulo’s Sirio-Libanes hospital, considered the region’s best, would not talk specifically about Chávez’s case. But he did say that a cancerous tumour in the pelvic region would be mainly limited to four types: prostate, rectal, bladder and sarcoma, the latter being a rare and deadly form of tumour.

National Assembly President Diosdado Cabello, a retired army lieutenant who accompanied Chávez in his failed 1992 coup, said Friday that the Venezuelan opposition should be the most worried about the president’s survival.

‘Fair and square’
Chávez allies have accused their political foes of hoping the president will die, opening a door for the opposition to win the October 7 vote.

Rival candidate Henrique Capriles has rejected such allegations and said he wishes for a Chávez recovery so Capriles can triumph “fair and square”.

“It is a different scenario if in the mind of voters an idea remains that the president is ill, with his near future compromised,” Leon said.

As Chávez’s motorcade traveled through the streets, hundreds of supporters covered his SUV with flowers and even a portrait of Jesus that read: “I will heal you. Forward, commander!”

“This goodbye should encourage him. I hope he returns and knows we love him,” said Lucia Cabeza, an unemployed 24-year-old.

‘A terrible exaggeration’
For others, it was just the latest spectacle surrounding a man with a flair for the theatric. He was given a similar send-off last summer when he flew to Cuba for treatment.

“Chávez has been doing this for 13 years,” added Margarita de Rodriguez, a 55-year-old homemaker. “Recently they celebrated the 4th of February, the coup that failed, and now they’re making a circus of his illness. They always do everything thinking about the elections.”

Chávez plans to continue governing from Cuba instead of delegating authority temporarily to Vice President Elias Jaua. He has not said when he might return to Venezuela. — Sapa-AP