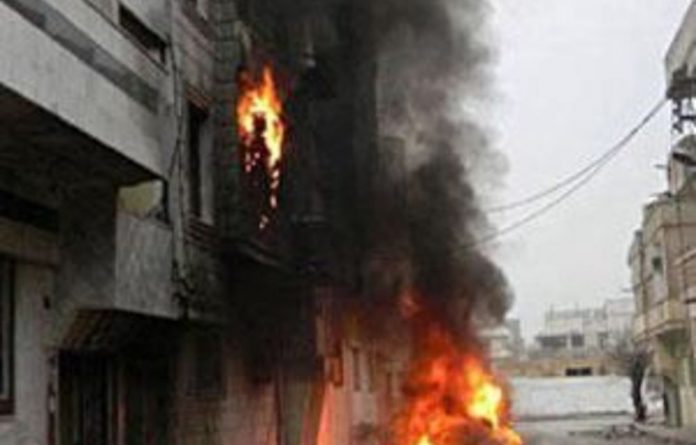 The Syrian government kept up its onslaught on Homs and other towns, with at least 100 killed according to human rights campaigners, as the country prepared to hold a referendum on Sunday on a new Constitution.

“No one is going to vote,” activist Omar, speaking by Skype from the rebel-held Baba Amro district of Homs, said in advance of the referendum staged by President Bashar al-Assad’s government.

“This was a Constitution made to Bashar’s tastes and meanwhile we are getting shelled and killed,” he added. “More than 40 people were killed today and you want us to vote in a referendum? … No one is going to vote.”

Forces loyal to Assad killed at least 100 people in Syria on Saturday in a fourth week of bombardments on the central city of Homs and assaults on towns and villages in northern and southern provinces, the Syrian Network for Human Rights said.

Six women and 10 children were among those killed, the opposition activists’ organisation, which documents what it describes as killings by loyalist forces, said in a statement.

It added that the dead included 44 people in Homs and the surrounding countryside, which has been under sustained shelling for more than three weeks.

Khalidiya, a neighbourhood inhabited by members of Sunni tribes from the Syriac desert east of Homs, also was hit, they said. Thousands of people in Khalidiya turned up on Saturday for the funerals of at least 17 people killed in the bombardment, according to YouTube footage uploaded by activists.

Another YouTube video showed Mohammad al-Mohammad, a doctor at a makeshift hospital in Baba Amro, holding a 15-year-old boy hit in the neck by shrapnel and spitting blood.

“It is late at night and Baba Amro is still being bombarded. We can do nothing for this boy,” said the doctor, who also has been treating Western journalists wounded in the city.

American correspondent Marie Colvin and French photographer Remi Ochlik were killed in the bombardment of Homs last week and other Western journalists in the city were wounded.

No further evacuation
The International Committee of the Red Cross (ICRC) said it was still unable to evacuate distressed civilians from Baba Amro. After a day of talks with Syrian authorities and opposition fighters, it said there were “no concrete results”.

“We continue our negotiations, hoping that tomorrow [Sunday] we will be able to enter Baba Amro to carry out our life-saving operations,” spokesperson Hisham Hassan said.

Conditions were nightmarish for some of those trapped by the fighting.

“We have hundreds of wounded people crammed into houses. People die from blood loss. We just aren’t capable of treating everyone,” activist Nader Husseini said via Skype.

The document would drop an article making his Baath party the leader of state and society, allow for political pluralism and enact a presidential limit of two seven-year terms.

Activists leading the revolt against four decades of Assad family rule have called for a boycott. In Damascus and suburbs where troops drove out insurgents last month, activists say they will try to hold protests near polling centres and burn copies of the new constitution.

Activists said security forces have stopped people who had ventured out to buy food in Homs, confiscated their Interior Ministry-issued identification cards and informed them the cards can be retrieved at specified polling centres on Sunday.

“They want to force people to vote in this doctored, so-called referendum anyway they can,” activist Mohammad al-Homsi said from Homs.

A purported photocopy of Baath Party internal correspondence directed to the party’s branches across the country said members needed “to gather the biggest party and popular participation in the referendum”.

“Please direct the Baathist comrades and brother citizens to vote ‘yes’ to the new Constitution because it expresses the aspirations of the Syrian Arab masses to build your modern state,” said the letter, signed by Mohammad Saeed Bkheitan, the party’s assistant secretary general.

The Local Coordination Committees, a grassroots activists’ organisation, called on Syrians last week to boycott the referendum, saying it was an attempt by Assad to cover up the crackdown.

The group in a statement said holding a referendum “whose result is known in advance” would not alter the police state that underpins the repression.

The authorities have held two referendums since Bashar inherited power from his late father 12 years ago. The first installed him as president in 2000 with an official 97.29% “yes” vote and the second renewed his term seven years later with 97.62% of the vote.

The authorities touted the referendums as the ultimate exercise of what they termed popular democracy. Dissidents said they were a sham. – Reuters

Outrage as students killed in anti-regime protests in Syria