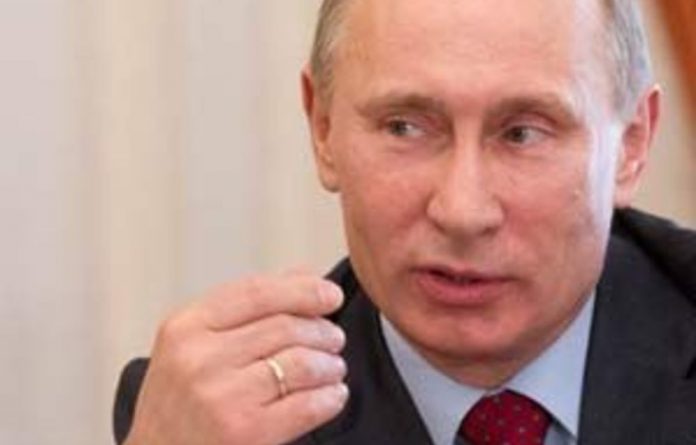 Russians protesting against the likely return of Vladimir Putin as president in elections next weekend have made a final push to show their discontent by forming a human chain around the capital.

Tens of thousands of people turned out in Moscow on Sunday wearing white scarves and ribbons, and carrying white balloons and flowers, the colour and symbols of the protest movement calling for Putin’s removal from power.

For an hour they lined the Garden Ring, a circular road around the city centre, holding hands to form a human chain. The protesters were joined by thousands of motorists who decorated their cars and honked their horns in support as they circled the eight-lane, 10-mile long road.

“This can’t go unnoticed,” said Olga Soldatova, a 46-year-old artist at the rally.

The unauthorised protest was monitored by a small contingent of police. Several hundred pro-Kremlin youth activists, carrying heart-shaped signs reading “Putin Loves All”, turned out to counter the protest but were vastly outnumbered.

Polls last week showed that Putin is due to win the March 4 election with more than half the vote, avoiding a runoff. Protesters questioned the accuracy of the polls and said they still expected to force him into a second round.

“Putin’s days are numbered,” said Artemy Troitsky, a prominent rock music critic who has addressed previous opposition rallies. “It’s only a question of how many days he has left and how long it will take us to squeeze him out of the Kremlin.”

While Putin remains the most popular politician in the country – thanks in part to the state’s control over television and access to politics – many in Moscow have turned against the powerful leader.

Police said 11,000 people attended Sunday’s protest, called the Big White Ring by its organisers, who said 34,000 were needed to hold hands along the length of the road.

It was the latest mass demonstration since parliamentary elections in early December saw Putin’s party win a majority amid widespread allegations of fraud.

The Kremlin has organised its own protests in response, but they have lacked the festive mood that has marked the opposition’s gatherings. There have been widespread reports that many participants in the pro-Putin rallies have been paid or forced to attend.

“Here the people came out on their own,” said Yevgeniya Albats, editor of the opposition New Times magazine, wearing a white ribbon as she stood along the Garden Ring. She contrasted the spirit of the rally with that at Putin’s biggest yet pre-electoral event, at Moscow’s Luzhniki stadium last week, when he urged supporters to come to his defence.

Protesters are getting ready to gather the day after the presidential vote, expecting a Putin victory.

“We’ve been through this before, more than once,” said Malkhaz, a 55-year-old businessman at the rally, who recalled how he defended the Russian White House in 1991 as the Soviet Union crumbled. “I counted the tanks that drove under my window,” he said. “It can’t be worse than that.” —

The journey into the heart of redness