Vets charged for illegal use of tranquillisers 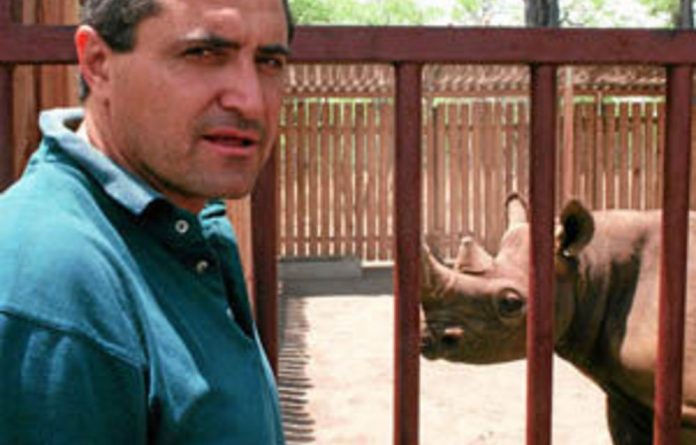 Three veterinarians, including the Kruger National Park’s former head of game capture, Douw Grobler, appeared in court this week on charges relating to the illegal use of a tranquillising drug favoured by rhino poachers.

Their appearance coincided with a furore about another vet who gave 26 bottles of the tranquilliser M99 to a game-capture outfit in Limpopo. With a strength of up to 3 000 times of that of morphine, the unauthorised consignment of M99 had the potential to knock out about 390 rhinos.

As the number of rhinos killed in 2012 climbed to more than 80 this week, at least 43 of them in the Kruger, watchdogs called for a clampdown on unethical members of the veterinary and private wildlife industry who are fuelling the poaching crisis.

Tom Milliken, Southern Africa director of Traffic, an international wildlife trade monitoring group, said individuals in the private game industry were conducting a “guerrilla warfare” that had a corrupting influence on public officials at reserves such as the Kruger.

“Poachers and Asian nationals involved in the illegal rhino trade are starting to get meaty court sentences,” he said. “Only when we see the high-profile white guys in the game industry end up with similar penalties will they realise it’s not worthwhile getting involved.”

Sarah Pappin, a representative of the United States-based non-governmental organisation, Saving Rhinos, said research showed that only 5% of the 397 rhino-related arrests made in South Africa between 2010 and 2011 were “white guys” in the game industry.

“Since 2006 29 white guys have been arrested in connection with rhino crimes. Only two were sentenced to jail time, more than 93% were granted bail, 17% were repeat offenders and more than 20% worked in the veterinary field,” Pappin said.

Grobler appeared on Tuesday in the Pretoria North Magistrate’s Court with Johannes Gerhardus Kruger, a private vet, and Buti Chibase, a state vet from Klerksdorp. They appeared with professional hunter and game farmer Hugo Ras and four others — Matthys Christoffel Scheepers, Riaal Booysen, Johan Carl Heydenrych and Christoffel Francois Naudé — whose details were not given.

National Prosecuting Authority spokesperson Mthunzi Mhaga said they were granted bail of between R1 000 and R5 000 each on provisional charges of contravening the Medicines and Related Substances Act and would appear in court again on April 3.

Grobler was arrested in November in connection with the possession and distribution of scheduled veterinary medicines. Five crates of medicines were confiscated during a police raid on Ras’s home, which led to his arrest.

During his tenure as head of the Kruger’s game capture unit, Grobler made an international name for himself on large-scale wildlife relocation programmes that included elephants and rhinos. He was fired in 2001 for the unauthorised sale of animals from the park’s disease-free buffalo breeding project.

Vets infuriated at the abuse of M99 leaked documents earlier this month about the unauthorised distribution of 26 bottles by Boksburg vet Johan Hendrik Meyer. A single drop — 0.1mg — of veterinary-strength M99, also called etorphine, can be fatal to humans. It can be bought only by vets, who have to keep it under lock and key and maintain a register of its use for inspection. A single bottle containing 10ml can sedate as many as 15 rhinos.

The potent drug has been used in numerous rhino-poaching incidents in recent years, particularly on private property, because it allows poachers to drop the animals without the noise of a gun. They then either kill the rhino before removing its horn, or leave it to wake up with a gaping hole in its face.

Meyer was found guilty of unprofessional conduct by the South African Veterinary Council and fined R25 000. He was also given a six-month suspension, set aside for 10 years on condition that he is not found guilty of a similar transgression.

The sentence caused a huge row among wildlife vets. Some described it as a “slap on the wrist” and accused the council of “failing the profession badly by not dealing with the problem”.

Lynette Havinga, acting registrar of the council, refused to be drawn into the row this week. She also could not say how many complaints the council had received about the abuse of M99 and other game-capture tranquillisers in the past year.

If vets are caught illegally distributing scheduled veterinary drugs such as M99, she said, “the council will act upon a guilt finding in the normal courts of law, will obtain the details of the court proceedings and will then hold its own investigation according to the required procedures in terms of the Veterinary and Para-veterinary Professions Act”.

Four South African National Parks officials arrested this week in connection with rhino poaching appear to have used silenced rifles rather than M99, investigators said.
The four — a ranger, two field guides and a traffic officer — were arrested on Tuesday after two freshly killed rhino carcasses were found in the Pretoriuskop section of the Kruger, an area where at least 11 rhinos have been killed since the beginning of the year.

Milliken said the arrests could prove to be an important breakthrough. “It is good that internal complicity in the poaching is getting exposed. It makes one wonder how many incidents in the past were influenced by similar internal factors,” he said.

Slaughter despite assurances
According to South African National Parks (SANParks), one of the field guides arrested this week took part in a month-long strike by 248 rangers in the Kruger National Park.

At least eight rhinos have died in the park since the strike started, despite assurances by the park’s management at the start of the dispute on February 3 that ­soldiers and honorary rangers would ­prevent poaching.

A meeting was scheduled for this week between SANParks, representatives of the strikers and one of the main unions, the Health and Other Service Personnel Trade Union of South Africa, in an attempt to end the strike.

The strikers were demanding equal salaries across the board for employees in similar ­positions. Some staff members in Mapungubwe National Park joined the Kruger employees in the strike this week.

Strikers’ representative Richard Ndlovu said some general field rangers were earning R26 000 a year, whereas others were earning R120 000. Rangers who had been working in the Kruger for decades were earning less than newcomers. They were also unhappy with the danger pay of about R200 a month and a “sleeping allowance” of R25 a night when rangers slept in the veld during anti-poaching operations.