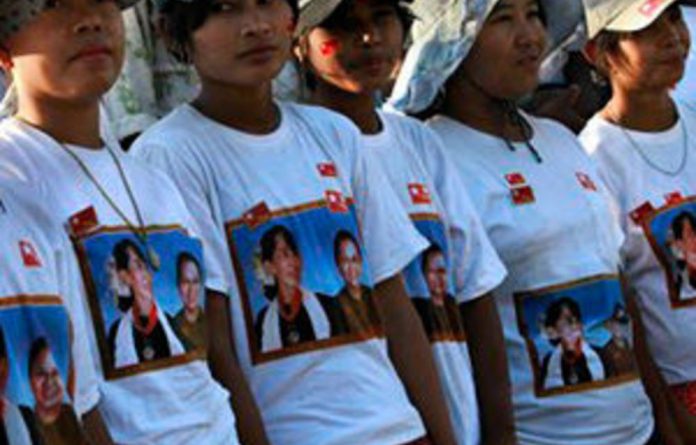 Unlike his charismatic opponent he does not get mobbed by adoring crowds, but the ruling party candidate running against Aung San Suu Kyi in April by-elections has no time for talk of defeat.

Former military doctor Soe Min is travelling from village to village offering free treatment to spread his message and try to drum up support for the army-backed Union Solidarity and Development Party (USDP).

He plays down the challenge of standing against a national hero like “The Lady”, who has drawn crowds of tens of thousands on the campaign trail as she stands for a seat in Parliament for the first time.

“I do not want to beat Daw Suu but I want to fulfil my duty given to me by my country,” he added, using a term of respect to refer to the 66-year-old Nobel Peace Prize winner, who is 17 years his senior.

“I’m not trying to beat her. I’m just competing for myself.”

Traditional wear
The bespectacled 49-year-old is a familiar sight at the local USDP charity clinic where he works, having left the military six years ago.

Wearing the USDP uniform of a white shirt and green longyi (similar to a sarong), and with his stethoscope in hand, the doctor tours his dusty hometown delivering health talks and check-ups beneath the party’s lion logo.

Sometimes he dons a traditional Karen costume to meet patients and would-be voters from the ethnic minority group.

In stark contrast to the huge crowds that have lined the streets for a glimpse of the opposition leader, Soe Min has the roads almost to himself as he travels around the rural constituency of Kawhmu near Yangon.

His message to voters: a vote for the USDP is a vote to “build a modern, democratic country”, preserve Burma’s sovereignty and to “maintain the unity” of the conflict-riven nation’s various ethnic groups.

With its top ranks filled with former generals, the USDP claimed an overwhelming victory in a 2010 election that was marred by widespread complaints of intimidation and fraud.

Boycotted
Suu Kyi and her National League for Democracy (NLD) party boycotted that vote, largely because of rules that would have required it to expel political prisoners from the party.

The pro-democracy leader was excluded from the 2010 polls because she was under house arrest at the time. She was released just days afterwards, having spent most of the past two decades in detention.

While the vote was widely criticised, the quasi-civilian government which took power last year after the end of almost half a century of outright military rule has surprised critics with a series of reforms.

Hundreds of political prisoners have been released and the NLD has been welcomed back into mainstream politics.

Observers believe that the regime wants Suu Kyi to win a seat in the April 1 by-elections to give its reform drive legitimacy and spur the West into easing sanctions against the country formerly known as Burma.

“Cooperation with Aung San Suu Kyi is very important for the country to move forward, to take away the sanctions, to bring about reconciliation.”

Trusty leader
Currently one-quarter of the seats in parliament are reserved for the army while the USDP holds about 80% of the remainder.

While the 48 seats at stake in the by-elections are not enough to threaten the USDP’s hold on power, Suu Kyi’s entry into Parliament would be hugely symbolic and give the opposition a role in the legislative process.

It is also a sign of the times that some dare to pledge their support openly against the ruling party — under the watchful eye of its local members.

“We will support our national leader Daw Suu. We trust her. We believe in her,” said farmer Aye Hlaing, standing in front of pictures in his home of the democracy leader and her late father, independence hero General Aung San.

Others appeared more enthusiastic about the USDP, although it was unclear whether they genuinely backed its policies or were simply pretending due to entrenched fear of the authorities.

“I truly believe that, thanks to my efforts, our party will win this campaign,” he said. — AFP