Fallout from the Implats strike chaos 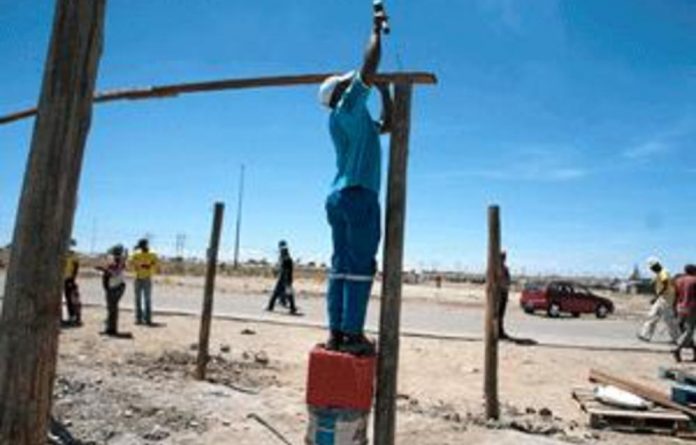 Thomas Shongwe, a Swazi national, lives in the Rustenburg area with his wife and six children. He runs a hair salon from the Batho Pele shopping centre near Impala Platinum’s shaft nine.

On February 16, at 9.30am, protesters came to his shop. “I could hear they wanted to fight, so I ran away,” he said. They broke down the door before taking everything: they stole the chairs and even ripped the basins out of the wall.

Later that afternoon striking workers set fire to a Chinese clothing store next to Shongwe’s shop. As soon as the crowd had moved on, he doused the flames with a fire extinguisher.

His shop remained closed during the three weeks of chaos. “There is no money for food; we are hungry now,” Shongwe said. He reopened the salon on Monday in the hope that the conflict had settled down for good. Other foreign shop owners are nowhere in sight. Shongwe said they fled the area. “I’m scared, yes, I’m scared — but what must I do? I’m working and staying here.”

Rustenburg police are investigating the vandalism and have recorded 49 cases stemming from the unrest — all lodged by foreign business owners.

Protesters go on a rampage
On February 16 protesters ploughed through the taxi rank and market at number two shaft. They looted and destroyed everything they could before setting fire to the stalls and buildings.

At the Impala interim results presentation, which took place on the same day, chief executive David Brown said the majority of those participating in the strike were no longer Implats workers. “It has spread to surrounding communities; it’s a sort of civil disorder,” he said.

Stalls and businesses near the Freedom Park settlement, as well as the Bakwena centre near shaft two, were also looted and set alight. Black patches where structures once stood are the only clue to indicate the bustling marketplace that was there less than a month ago.

Only a few South African traders, who also suffered at the hands of the strikers, have begun to rebuild.

Lydia Mochekoena, who sells fruit and vegetables at the taxi rank, has run her business here for over 20 years.

“That Friday morning somebody phoned me to say ‘don’t come through; they are burning everything’.” Monday was also her first day back at the marketplace.

She is starting to rebuild her stall with a few poles and planks — many of which were given to her on credit, as she is unable to pay the full price after weeks of no income.

Losing everything
Mabel Ntshamane and Gloria Masike, shoemakers working at the Bakwena centre, have lost everything. They wander around the building that’s been gutted by fire. Ntshamane carries her sleeping three-year-old daughter on her back. Strewn amid the ruins are hundreds of pairs of shoes that have warped and melted.

“We don’t know how to make good with our customers,” Ntshamane said. “They will want their shoes; what will we do?” She estimates at least 500 pairs of shoes were in the shop.

Ntshamane, a single mom, and Masike, whose husband is unemployed, used to earn up to R400 each in a good week. With no other income since the strike, they are at a loss over how to start rebuilding their business.

Paulina Gaobapa, a seamstress working in the same store, said all the machines were taken. “To buy another Singer [sewing machine] will cost about R3 000,” she said.

It appears the strikers hoped their actions would put more pressure on management to give in to their demands, Shongwe claimed. “The white-owned and foreign-owned shops have been attacked to send a message to Impala management.”

Willem Nel, a tavern owner, has lost almost R1.5-million. The property is bare except for broken bottles, till slips and smashed-up cash registers. Even the electrical wiring was removed by opportunists.

Though devastated, Nel said he and other white shop owners will not suffer like the rest. “I may have lost R1.5million, while some of these vendors have lost only R2 000 or R500. But there is no difference — to me it is everything and to them it is everything. I at least have insurance and things like that. They have absolutely nothing.”

Although Impala confirmed that all miners had returned to work on Monday, the community remains hesitant to let its guard down.

Anatomy of a deadly protest
The Impala Platinum strike at its Rustenburg mine began on January 20 when rock drill operators downed tools in protest against a decision to give some employees pay hikes that did not include them.

The strike grew, becoming increasingly unruly. Soon the mine took a decision to dismiss more than 17 200 workers who participated in the illegal strike.

Workers, some earning less than R3 000, had demanded a monthly wage of R9 000 after deductions.

But, in a press release, Implats noted that “at no stage are any collective increases implemented without due process and consultation with the NUM [National Union of Mineworkers]”.

Three people were killed during the protests and many others were injured.

This level of violence is uncommon for a wage strike. Implats said this supports its belief that the strike was about far more than just a wage disagreement.

On February 29, after a meeting involving Implats, the NUM and a delegation of rock drill operators, it was agreed to call an end to the illegal work stoppage.

Almost 15 000 workers re­applied for their jobs and production resumed on Monday.

The NUM said the issue of payment has not yet been resolved. — Lisa Steyn