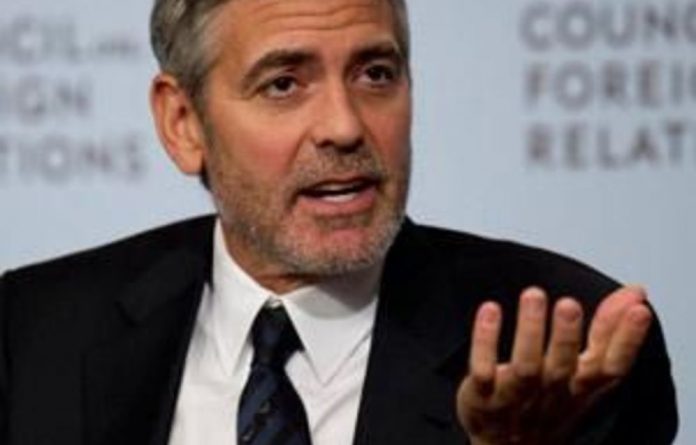 Hollywood heartthrob and activist George Clooney said on Tuesday that Sudanese government forces were committing war crimes with attacks on civilians — including a rocket strike that he narrowly escaped.

“There’s a difference between two armies fighting and what the Geneva Convention calls war crimes,” Clooney told a foreign policy think tank in New York, hours after arriving back in the US from a visit to the Nuba mountains region.

“We saw that very specifically happening on two occasions: rape, starvation, lack of humanitarian aid. They’re scaring the hell out of these people and they’re killing, hoping and trying to get them just to leave,” he said.

Call for action
Clooney has long called for attention to the war between Sudan and newly-independent South Sudan. On a trip in January he contracted malaria. On this trip the risks were even greater, he said.

While visiting villagers hiding in caves since the start of a government aerial bombing campaign, Clooney and his activist colleague John Prendergast, were told quickly to take cover, he recounted.

Thinking that the warning referred to a slow-moving government Antonov plane, Clooney said they failed to hurry. “But it wasn’t an Antonov. It was a rocket and it went boom. We were looking for that area and we got there but we weren’t expecting rockets,” he told the audience at the Council on Foreign Relations, which was packed for the event.

Clooney and Prendergast, who together co-founded the Satellite Sentinel Project, showed the rapt audience of foreign policy experts a video they’d made in the Nuba mountains.

Shown wearing a baseball cap and unshaven, Clooney looked little like most of the characters he plays on the big screen. In one segment he stands over a corpse, along with the text written: “How many more bodies?”

Other footage shows locals in front of huge rock piles. “For the first time since the stone age, people are living in caves,” the text says.

Report to Congress
Clooney and Prendergast left late on Tuesday for Washington where they will report on their trip to Congress and to President Barack Obama and Secretary of State Hillary Clinton.

Clooney said the key to pressuring Sudanese President Omar al-Bashir, who is wanted for war crimes and genocide by the International Criminal Court (ICC), is China, a big client for South Sudanese oil.

“China has investments in there, but right now China is pretty ticked off,” Clooney said. “There’s some movement here. There’s an opportunity,” he said.

“What I’d like is for the president to send a high level envoy to China,” he said. “We believe there’s a moment in time when we can have a non-adversarial relationship with them.”

Sudan was split into two countries in July last year but the two countries have been in constant dispute since. Before the divorce, the north and south fought a two decade civil war in which more than two million people died.

Sudan’s forces overran the disputed territory of Abyei in May last year and have been accused of staging air attacks on the South. The Khartoum government in turn accuses the South’s government of backing rebels in its South Kordofan and Blue Nile regions. — AFP