Time’s up for Malema to appeal his expulsion 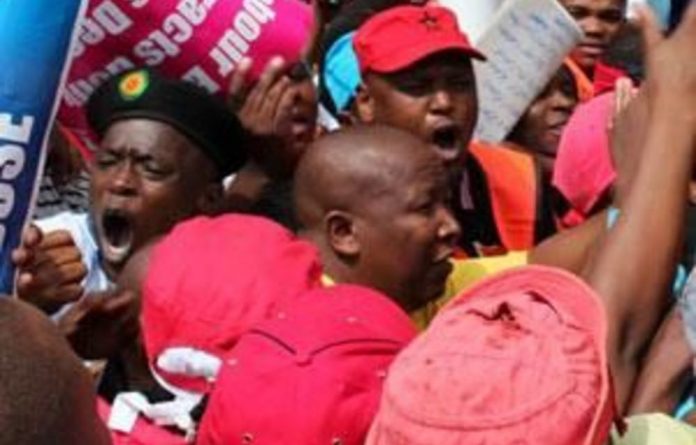 Today is the deadline for Julius Malema to appeal the ANC’s national disciplinary committee decision to expel him from the ruling party.

The ANC Youth League had said their leader would be lodging an appeal to the ANC’s national disciplinary committee of appeal (NDCA), headed by Cyril Ramaphosa.

Malema was expelled two weeks ago for bringing the party into disrepute. It is not clear when the appeal hearing would be held.

Floyd Shivambu, the ANC Youth League spokesperson, was given a three year suspension.

Despite his suspension Malema has remained upbeat, promising his supporters that he would not give up the struggle for his position nor abandon the fight “against capitalism”.

When he attended Cosatu’s national strike in Johannesburg last week he was mobbed by the crowds of striking workers who chanted, “Juju, Juju.”

In an interview with SABC radio at the weekend, Malema appeared to show contrition for the first time, asking ANC leaders to forgive him for “anything they think I have done wrong”.

Malema’s options do not end with the appeal process. He could still ask the ANC’s national executive committee to review the matter and if that fails, take it to the conference floor in Mangaung in December in what would be an unprecedented move in the party’s 100-year history.

The matter has already dragged on since November, when he was found guilty by the disciplinary committee of bringing the ANC into disrepute and sowing division in its ranks and suspended from the party for five years.

On February 4, the appeal committee upheld the finding but instructed the lower panel to hear arguments in mitigation or aggravation of sentence.

Malema’s subsequent comments that only the youth league had the power to oust its leaders did him no favours.

On February 29, that committee pronounced the ultimate penalty after describing Malema as a repeat offender who had failed to show remorse or to respect the disciplinary structures of the organisation.

Malema was found guilty of portraying the ANC government and its leadership under Zuma in a negative light, and for statements about creating regime change in Botswana, at an ANCYL press conference on July 31 2011.

Malema was initially found guilty of propagating racism or political intolerance for his utterances, at an election rally in Galeshewe, Kimberley in May 2011, that whites should be treated as criminals for stealing land from blacks.

However, this charge was dismissed by the appeals committee because it was not proven on a balance of probabilities.

During his mitigation hearing, Malema said the charges against him were “politically motivated”, an argument which both the national disciplinary committee and the appeal committee rejected. — Sapa