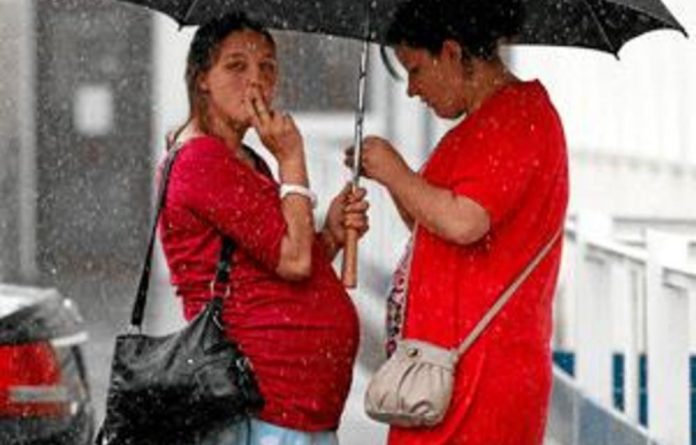 Almost six out of 10 teenage mothers in the United Kingdom continue to smoke during pregnancy, although there has been a significant decline in the total number of younger people smoking in the past year.

The figures have dismayed experts and could mean the British government will miss key targets for improving the nation’s health.

The issue of young mothers who smoke while pregnant was in the spotlight recently when celebrity Stacey Solomon, who made her name as an X-Factor finalist, admitted she was still smoking two months before she was due to give birth. In the ensuing furore, Solomon was stripped publicly of her celebrity mum of the year title by a gambling website.

Department of health data, published on the first anniversary of health secretary Andrew Lansley’s tobacco control plan, shows the percentage of people in England who smoke has fallen from 21% to 20% in the past year. There was a 5% decline in the number of younger smokers, with younger women, in particular, turning away from cigarettes.

Decline in number of teenage smokers
Over the past 10 years the proportion of teenage girls who smoke has fallen to an all-time low, from 31% to 17%. But one in four women smokes during part of her pregnancy, bringing the long-term decline in smoking during pregnancy almost to a halt. A particular concern is smoking among pregnant teenagers.

A meeting of experts at the Royal College of Paediatrics and Child Health heard that nearly six out of 10 pregnant teenagers smoked. Only about a third of them managed to quit, compared with about two-thirds of older mothers. The meeting heard that depressed women were up to four times more likely to smoke during pregnancy than non-depressed women, and that between 25% to 50% of pregnant smokers had mental health problems.

The government wants to reduce the percentage of women who smoke at the time of delivery to 11% by 2015. But the figure dropped by just 0.1% last year to 13.4%, largely because teenage mothers will not stop, suggesting the target will not be achieved.

Socioeconomic factors are thought to play a key role in determining whether teenagers smoke during pregnancy and whether they will quit.

According to Action on Smoking and Health, women from routine and manual-work groups are almost three times as likely to smoke as women classed “managerial and professional”.

Smoking seen as normal
Sociologists suggest that for teenagers smoking is often the norm. In contrast, women who have babies later are much more likely to come from communities in which smoking is less common.

“The number of teenagers who smoke is falling fast, but you have to ask yourself: Are the most disadvantaged young people getting left behind?'” said Martin Dockrell, the action group’s director of policy and research.

“When you look at the figures about smoking among teenagers, you are looking at young women with a double disadvantage. First, these are young women approaching the peak age for smoking. By the time women reach 25, they start to quit in large numbers. Second, better-off women tend to have their children later, so these are women, on the whole, not just younger but also less well off.”

The analysis suggests health officials need to find new ways of encouraging teenage mothers to stop smoking. It complements research by Professor Hilary Graham of York University’s department of health sciences, which has found that education, the age of becoming a mother and lone parenthood are all linked to a greater incidence of smoking during pregnancy.

Graham has argued that government policy on smoking has led to the public vilification of disadvantaged groups, including teenage mothers. As a result, the government strategy of “promoting lifestyles more commonly found in middle-class communities is unlikely to promote social cohesiveness”.

Dockrell said: “Research shows that the health behaviours of those around us — be that smoking or quitting — make a bigger difference to our own behaviours than we realise.

“I think that’s part of the reason why younger women are not just more likely to smoke, but also much less likely to quit,” he said. —

It’s time for a new conversation to reduce smoking rates