Philander hot on Steyn’s heels as Proteas win in NZ 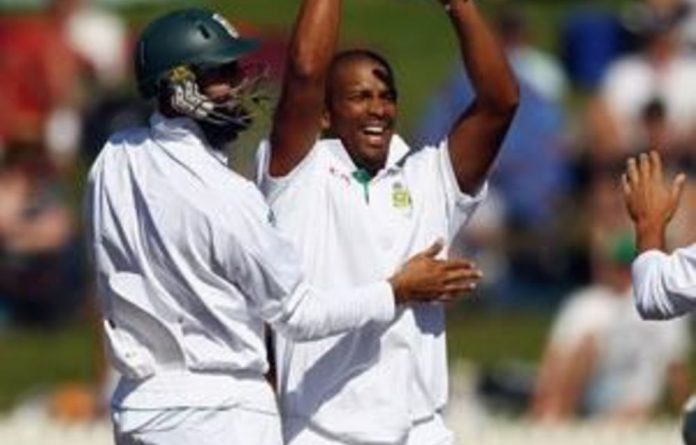 Vernon Philander produced the best figures of his remarkably early career for South Africa to wrap up the second Test against New Zealand by nine wickets inside three days on Saturday.

The tourists needed just 20 overs to reach the 101-run target in Hamilton, after New Zealand’s second innings crumbled under Philander’s brilliant swing bowling to be all out for 168.

Skipper Graeme Smith was not out 55 with Hashim Amla on 46 as South Africa made 103-1. Smith ended the one-sided match at Seddon Park with a boundary off Rob Nicol.

Playing in only his sixth Test, he produced the best bowling of his brief career with a whopping 6-44 to give him match figures of 10-114 and the man-of-the-match award.

He now boasts Test career statistics of five five-wicket hauls and a total of 45 wickets at an average 13.6 runs apiece, closing the gap on teammate Dale Steyn who is the world’s top ranked bowler.

Egging each other on
“If he keeps going the way he is then he’ll get there pretty soon,” Smith said.

“It’s terrific because they all work together and they know their roles but they all want to be successful in their own right, egging each other on.”

New Zealand captain Ross Taylor admitted his side folded under the pressure imposed by Philander and Steyn, who finished with match figures of 5-80.

“We were probably on top a couple of crucial times but I thought Philander, the way he bowled throughout both innings, he and Steyn, put pressure on our batsmen and the pressure told at the end of the day,” he added.

New Zealand resumed the day at 65-4, three runs in arrears, with Kane Williamson and Daniel Vettori (21) forging a dogged stand at the crease.

Williamson took 41 balls to advance from his overnight score of 41 to make a half-century and Vettori was just as watchful as Philander and Dale Steyn swung the ball.

The hosts nudged the score to 99 before captain Smith brought in Jacques Kallis, who broke the partnership with a short ball which reared up, flicking Vettori on the gloves for Mark Boucher to take the simplest of catches.

The unstoppable Philander
Philander then returned to wrap up the innings with an outstanding spell of bowling in which he took 4-14 in 18 balls.

He took Kruger van Wyk (20) before lunch and then New Zealand’s anchor Williamson for 77 immediately after the break.

Mark Gillespie belted two fours and a six off Philander in one over before he was caught behind and the rampaging South African bowled Chris Martin for a duck to wrap up the Kiwi innings for 168, to go with their first innings 185.

With a small total to defend and more than two days remaining, New Zealand had no option but to attack and they claimed the wicket of Alviro Petersen in the second over when he played back to Doug Bracewell and edged the ball to South Africa-born wicketkeeper van Wyk.

But that was to be the Black Caps’ only success as captain Ross Taylor kept his field in hoping for catches that never came while leaving the boundaries exposed to any ball that broke the cordon.

In the space of 20 overs he used seven bowlers but none troubled Smith and Amla, who steered the ball around the park with ease.

South Africa lead the three-Test series 1-0, after rain spoiled any chance of a result in the first Test. The third and final match starts in Wellington next Friday. — AFP