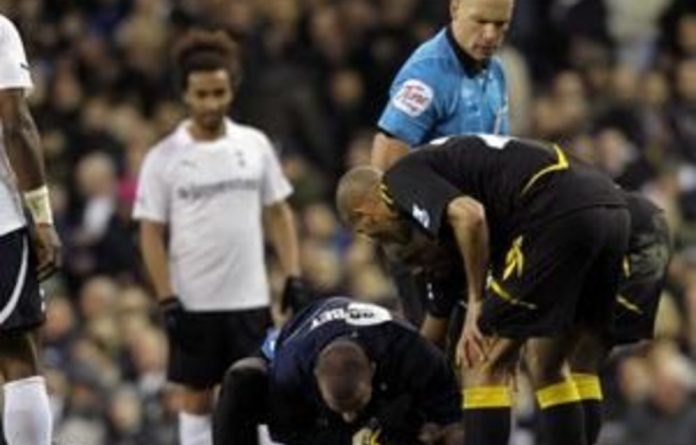 Bolton Wanderers midfielder Fabrice Muamba remained in a critical condition after suffering cardiac arrest during the FA Cup quarterfinal at Tottenham Hotspur on Saturday, the hospital and club said in a joint statement on Sunday.

The 23-year-old will remain anaesthetised in intensive care for at least the next 24 hours after collapsing on the pitch at White Hart Lane where he was given CPR (cardiopulmonary resuscitation) by medics before being taken to hospital.

The match was abandoned at 1-1 just before halftime after Muamba fell to the turf near the centre circle. No other player was involved in the incident and after a delay of several minutes referee Howard Webb took the teams off the field.

“Fabrice Muamba remains in a critical condition in intensive care in the Heart Attack Centre at the London Chest Hospital. There will be no further update tonight,” a second statement of the day read.

A previous statement said: “As is normal medical practice, Fabrice remains anaesthetised in intensive care and will be for at least 24 hours. His condition continues to be closely monitored by the cardiac specialists at the hospital.”

Messages of support for England under-21 international Muamba have come flooding in from players, clubs and fans with flowers and messages delivered to the hospital and laid outside Bolton’s Reebok stadium.

Bolton’s Premier League game at Aston Villa which was scheduled to take place on Tuesday has been postponed.

Messages of support
Bolton manager Owen Coyle said: “Fabrice’s family have asked me to pass on their thanks for the many, many kind messages of support from not only Bolton fans but also fans from clubs across the country and abroad.

“All our thoughts and prayers are for Fabrice and his family at this time. The family would also like to thank the media for respecting their privacy at this time.”

Muamba’s family, including his fiancée Shauna and his brother, have visited the player.

Tottenham chairperson Daniel Levy issued a statement on the club’s website (www.tottenhamhotspur.com) saying: “Our thoughts are with Fabrice’s family and Bolton Wanderers and we are all willing him to pull through. Events such as this put everything into perspective.

“We are immensely proud and grateful to the medical teams at both clubs, their response was immediate and professional. Our thanks also to both sets of fans for their support and behaviour.

“Too often we read the negatives about football and yet last night, at a time of intense emergency and uncertainty, we saw the true humanity and empathy of the footballing family.”

Supporters from both clubs sang Muamba’s name when it became apparent his condition was serious as several players gathered around him, some crying and holding their heads in their hands.

As he was carried off the pitch on a stretcher there was applause from the crowd before the fans fell silent and filed out of the ground into the cold night air in sombre mood.

State of shock
“All our thoughts are with Fabrice, his family, Owen Coyle and the club,” added Spurs manager Harry Redknapp.

“It was the right decision to abandon the game, everybody was in a state of shock and it wouldn’t have been right to carry on. Football is the last thing on anyone’s mind when an awful situation such as this happens.”

Wolverhampton Wanderers and Manchester United players shared a minute’s applause in support of Muamba before their Premier League match on Sunday.

Muamba, who was born in Democratic Republic of Congo, joined Bolton from Birmingham City in 2008 in a deal worth over £5-million and has made 130 league appearances for the Premier League club.

He came through Arsenal’s youth academy and made two League Cup appearances for the north London club in the 2005-06 season.

Arsenal’s England midfielder Jack Wilshere tweeted: “When I went to Bolton on loan [in 2009] I was just a kid moving away from home, I knew Fab from the U21’s and I will never forget my 1st day, he showed me around the training ground, introduced me to everyone and basically looked after me.

“If you know him then you will know what type of man he is! A leader and a genuinely nice guy! Everyone keep praying!” — Reuters

Two of football’s youngest coaches are competing for one of its highest honours. This tells us something about how the Premier League appoints manager
Read more
Coronavirus

Derby delight for the Red Devils kept them on Chelsea's coattails in the battle for a top-four finish, but it was also a good Sunday for the Blues as they thrashed Everton 4-0.
Read more
Sport

The Germans might not be making many friends back home but who needs them when you’re making history?
Read more
Sport

Liverpool lost their invincibility as they were beaten by Watford who climbed out of the relegation zone. The top four race continued with its inconsistency
Read more
Advertising