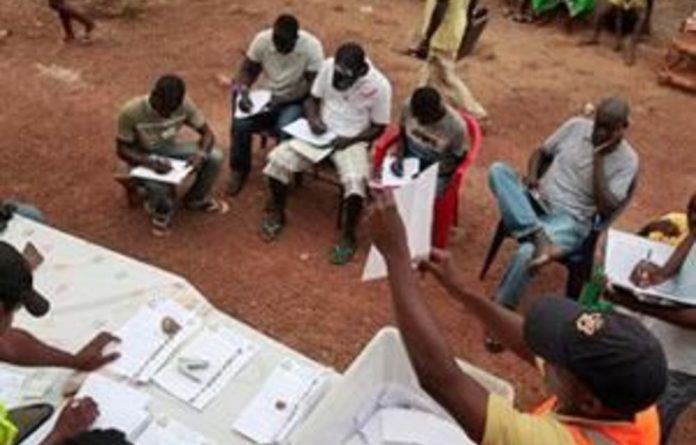 Voters in Guinea-Bissau cast ballots for a new president on Sunday in polls seen as key test for the West African state whose chronic instability has fed a booming cocaine trade.

Opposition candidates criticised what they said was the poor organisation of the vote, with one alleging possible fraud. But the national election commission said it had not noted any irregularities.

“I have information concerning signs of fraud,” said independent candidate Henrique Rosa, who led an interim government after president Kumba Yala was overthrown in a 2003 coup.

“My team and I are busy investigating before we say anything further,” he added.

Yala, who is also running, criticised what he said were “badly organised” polls, adding: “All that is the responsibility of the government.”

Election commission vice-president Orlando Veigas said in a statement on Sunday that monitors had not noticed any irregularities.

Nor had the British election observer team, according to its head, Peter Thompson.

Crucial aid
Polling stations closed around 5pm and counting began immediately. But the commission has not said when the results will be released.

If no clear winner emerges, the vote will go to a second round, which will take place between April 22 and 29.

The election is seen as crucial for setting the country on the path to stability and qualifying it for crucial international aid to help reform a bloated and powerful army — and end the country’s appalling record of coups.

Guinea-Bissau achieved independence from Portugal in 1974, the only West African nation to do so through armed combat.

But ever since then, the army and state have remained in constant, often deadly conflict, with the result that no president has ever completed a full term in office. Three have been overthrown by coups and one was assassinated in office in 2009.

“I am sick and the country must be peaceful so I can get care,” added the 64-year-old, who walked slowly and with difficulty.

A mutiny by renegade soldiers in April 2010 prompted the European Union and the US to suspend monetary aid for badly needed reforms to the army, which demands 10% of the country’s budget.

Although the three-week election campaign was peaceful, some fear violence or even another military intervention if the army does not approve of the winning candidate.

Nine candidates are in the running, including Carlos Gomes Junior (62) who stepped down as prime minister to run for the ruling African Party for the Independence of Guinea and Cape Verde (APIGCV).

“My victory is certain,” he said — a confidence echoed by most of the candidates.

But Gomes has been unpopular with the military for advocating a reform of the army. He was even briefly kidnapped by the current army chief during the 2010 mutiny.

Oil-rich Angola is believed to have played a powerful role in smoothing tensions in the country, where it has scores of troops stationed.

Their presence has been another source of resentment for some elements in the country’s military, who feel Gomes is cultivating a personal security force, Foucher said.

Impoverished Guinea-Bissau, which survives mostly by exporting cashew nuts and fishing, is also working on a big bauxite mining project which could boost the economy.

A dysfunctional state with a porous coastline and an archipelago where hidden airstrips can be set up, it has also provided fertile ground for Latin American drug lords looking for a hub to ship their cocaine to Europe.

The US in 2010 labelled the country’s air force and naval chiefs “drug kingpins,” and the trafficking was said to involve leaders of the country’s highest institutions.

The electoral commission announced Saturday that 593 000 had registered to vote, an unexplained increase from a previous figure of 579 000. — AFP