No end to agony in eastern DRC 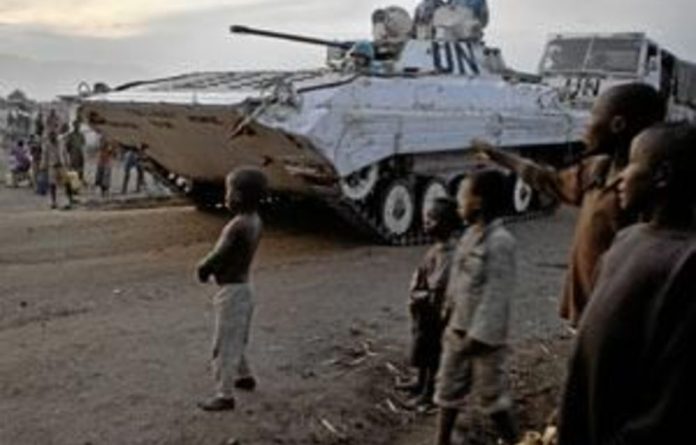 It is almost dusk and shadows darken the long dirt road that runs between Beni, in the Democratic Republic of the Congo’s (DRC’s) North Kivu province, and the border town of Kasindi, on the Ugandan frontier. Women doing their daily washing in a nearby stream pile their garments into baskets.

Standing among banana trees outside a mud hut not far from the road, a small, naked child watches silently as a Land Cruiser rattles by.

In the gloom you can make out three ghostly figures, unmoving, stunted, wrapped in army fatigues, helmets clamped down hard over expressionless faces. For a moment this dusty trio seems to leer menacingly at the passing traveller.

As they come into focus, it is clear that these are no apocalyptic spectres presaging a hellish descent into darkness, but scarecrow dummies left behind by departing Congolese army troops who once camped here — a sort of Three Stooges done out in khaki.

Perhaps the display is meant as a joke. But it also conveys a sinister warning: this is the DRC. Nothing is entirely understood. Make no assumptions. Anything can happen. Truth is divisible.

Sure enough, an hour and a half later a truck that has gambled on taking the Beni-Kasindi road after dark is held up by 18 armed men who emerge like wraiths from the dense jungle. The truck is ransacked, all its goods stolen. The driver is lucky — he escapes with his life, but not with his wallet.

It is the sort of hard lesson the United Nations, international aid organisations and private non-governmental organisations (NGOs) have taken to heart as they struggle, year after relentless year, to keep a lid on the huge, continuing humanitarian and developmental crisis that is the eastern DRC.

Africa’s “great war”, which centred on the DRC and killed an estimated five million people, ended in 2003. In North Kivu, it did not ever quite stop.

Around the eastern DRC’s hapless inhabitants, among them and preying upon them, are armed groups, some foreign, such as the Rwandan Hutu Democratic Forces for the Liberation of Rwanda (FDLR) and the Ugandan Lord’s Resistance Army, some home-grown, the so-called Mai-Mai.

Also feeding off the civilian population, as the fancy takes it, is the state military arm known as the Armed Forces of the Democratic Republic of the Congo (FARDC), who are often badly trained and ill-disciplined, habitually unpaid, politically and ethnically divided and chronically abusive.

The eastern DRC, largely comprising the provinces of South and North Kivu, has become internationally notorious for atrocities, mass rapes and other forms of sexual violence against women and men, child soldiers, child labour and prostitution, abductions, extortion, illegal mining, exploitation and official corruption on an industrial scale. Government authority is all but non-existent. Too often, the law of the jungle rules the jungle and force is all.

Musaba (not his full name), who lives in a village near Beni, said instances of sexual violence were increasing. “We have had seven cases of rape. People go to the fields, they go to the forests and they are attacked. We don’t know who is doing this. They are soldiers doing it. That is all we know.”

Collusion
A local doctor, who asked not to be named for fear of reprisals, gave more details: “People are frightened to go to the fields, so they are not producing, they have nothing to eat. Many people have been killed just trying to harvest the food. In our area, 100 have been killed since 2010.” The army and the police did nothing to help, he said, and sometimes colluded with armed raiders.

“No one is ever punished.”

Another villager, Adolphe, who advises the local protection committee, a self-help group funded by Oxfam, said the arrival of internally displaced people was placing strain on the community.

“As refugees, these people have different requirements, they have different needs. They don’t have any health assistance or a place to live. We try to help them integrate and tell our people that they are not a threat.”

Asked for a response, an army spokesperson said: “Our only wish is that the population live in peace. There are many criminal groups, there are many demobilised soldiers; the civilian population has a lot of arms. These people say the army is responsible for attacks. But maybe it is they who are doing these things.”

The UN mission here, known as Monusco, is the biggest and most expensive of its kind in the world — about 20 000 personnel, 17 000 of them soldiers, at an annual cost of $1.5-billion, complemented, in theory at least, by UN relief agencies and leading international NGOs.

Monusco’s decision to throw its weight and its troops behind the latest Operation Perfect Peace offensive, launched by government forces against the FDLR in North and South Kivu, is controversial. But it seems justified in terms of the DRC’s harsh reality, as acted out on the Beni-Kasindi road.

Retraining and integrating
“In 2011 the armed groups started reoccupying territory vacated by the army when it withdrew for retraining and integration of the CNDP [the anti-government National Congress for the Defence of the People],” said a senior UN official in Goma, the capital of North Kivu.

“Now the army is taking them back. The FDLR has lost several top commanders in recent months. It is weaker than before. We expect to finish them off in the next two years.”

The downside, the official added, was that new instability would create a new surge of internally displaced people and was encouraging the formation of additional Congolese armed militias.

It was also likely to hamper UN-backed efforts to regulate the mining of the eastern DRC’s precious metals and minerals — the root cause, along with land disputes, of much of the friction in the area — and exacerbate food shortages, he said. At present, many farmers could not access their fields for fear of violence. But this, the official said, was an acceptable cost for finishing off the rebels.

Monusco’s readiness to back the Congolese army has been attributed in some quarters to pressure last year from the government of President Joseph Kabila for a reduction of the UN mission, preparatory to departure.

In return for being allowed to stay, the mission was rebranded a “stabilisation” rather than a peacekeeping operation. It subsequently agreed to boost state authority further by backing the new offensive.

Increasing insecurity
Valerien Ilombe, the secretary general of Apide, an NGO that promotes indigenous development initiatives from its base in Goma, said the army’s new push would increase insecurity among people who already had very little.

“People generally are very poor. The majority lives on less than $1 a day. Everything they consume comes from outside the country. They cannot sustain themselves due to the insecurity.”

Aid agencies do not hide their concerns that the UN policy of getting into bed with Kabila’s government could backfire, as in 2009 when similar UN-backed army offensives were linked to 1 000 civilian deaths, mass rapes and the displacement of 800 000 people. They say creating more instability to end instability is nonsensical.

Domestic opponents of the Kabila regime also mention the continuing suppression of dissent, harassment and surveillance of civil rights organisations, arrest of political activists, intimidation of journalists and the harbouring of Bosco Ntaganda, a war crimes suspect sought by the International Criminal Court, as evidence that the UN is unwisely turning a blind eye to serious abuses and is acting in contravention of its own charter.

According to UN rules, missions sent abroad should abide by “three basic principles” of peacekeeping: consent of the parties, impartiality and not using force except in self-defence and defence of the mandate. Even when a mission is authorised to use “all necessary means” to achieve its objectives, as is the case with Monusco, the rules state that “a UN peacekeeping operation should only use force as a measure of last resort”.

This injunction will almost certainly not be adhered to in the Kivus as Operation Perfect Peace is rolled out.

By collaborating with the Kabila government, Monusco is following the example of most Western governments. The price paid by the eastern DRC’s long-suffering civilian population for this high-level collusion continues to mount.

Speaking on condition of anonymity (he said he would certainly be killed if his identity was revealed), a senior public health official in North Kivu said: “People live off their fields, but they are not producing because of the security situation, so malnutrition is increasing year by year. Malaria and gastroenteritis and upper respiratory diseases and anaemia — they are all increasing.

“The FARDC has been paid off for years, they are living off the population. They work together with the bandits to raid the people. The police are not helping, the government is not helping, the UN is not really helping … We are becoming more and more dependent on outside donors. Everyone knows this is true, but no one can say it.” —