Police: Advertising illegal abortions is ‘like selling a car’ 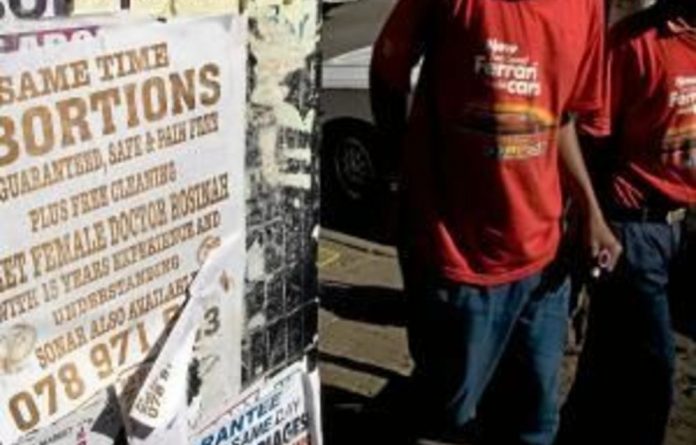 The police say the advertising of illegal and dangerous backstreet abortions isn’t their problem — it’s a matter for the Advertising Standards Authority (ASA), because it’s similar to “selling a car”.

But the ASA says it’s powerless to do anything about it.

Over the years, South Africans have become accustomed to seeing fliers posted on walls and lamp posts, advertising “safe and pain-free”, “same-day” abortions.

That the people behind these advertisements may be peddling illegal prescription medication or be responsible for injuring or causing the deaths of women seems to be of little concern to police.

Police spokesperson Katlego Mokgale told the Mail & Guardian this week that advertising these services was similar to “selling a car” and that it was a matter for the ASA.

This analogy, just days after a young woman died from what police believe to be a botched abortion, highlights the failure of the country’s justice system to act in the best interests of South African women.

Attitudes notwithstanding, it appears that backstreet abortionists are falling into a grey area between the police and the advertising authority.

Freddy Makgato, head of legal and regulatory affairs at the ASA, said that even though the authority had received a number of complaints about advertisements for these illegal services, they were unable to enforce any rulings they made on the matter.

An agreement with the JMPD to have police patrols remove the posters and arrest those putting them up had proved ineffective.

“You arrest a guy who’s been paid with a loaf of bread to put up posters,” he said, but the bogus doctor offering the abortion remains at large.

“We are frustrated when these people continue to advertise,” Makgato said, complaining that there was no “preventative measure” to help bring down the law against backstreet abortionists and that police could only make an arrest after someone had attempted to perform an abortion.

“We need to have a situation where it’s made a criminal offence for someone to offer these services [not just perform them],” he said.

The Choice on Termination of Pregnancy Act governs the conditions under which an abortion may be provided, and stipulates that any person who is not a medical practitioner or registered nurse with special training who performs an abortion is guilty of an offence, and is liable to be fined or spend up to 10 years in prison. But it does not explicitly forbid the advertising of such services.

The Act does not, however, specify whether the person receiving an illegal abortion is guilty of an offence.

Abortion has been legal in South Africa since 1996, when the Act was passed. It makes provision for women to access legal abortions on request at state or private facilities up to 12 weeks into the pregnancy.

If there are extenuating circumstances — socioeconomic or health reasons or because the pregnancy was the result of rape or incest — it is still legal to have an abortion up to 20 weeks into a pregnancy.

But research has shown that more than a decade later, many women are still unaware of their rights in this regard. About a third of South African women still believe that abortion is illegal.

Women who are aware of their options for legal abortion also face a number of difficulties. Opposition from healthcare workers, the fear of stigma, and a paucity of trained providers and abortion facilities stand in the way of women pursuing the legal route to a termination of pregnancy.

This may explain why women such as Ayanda Masondo, the 20-year-old University of Johannesburg student who died on Sunday, still resort to dangerous backstreet abortions.

Health department spokesperson Fidel Hadebe told the M&G that it was sad that Masondo’s death should serve as a cruel warning to those considering backstreet abortions.

“The simple message is that backstreet abortions are dangerous,” he said.

But the reality for South African women seeking an abortion is anything but simple.

Masondo’s death is just one of many that takes place each year. In the period 2004 to 2007, 136 women died as a result of complications arising from abortions. More than half of these were avoidable.

According to the Fourth Report on Confidential Enquiries into Maternal Deaths in South Africa, released late last year by the health department, the state’s capacity for providing abortions is declining.

The report raised the concern that the rise in maternal deaths in South Africa might be related to women’s lack of access to safe, legal abortions, and called for an inquiry into the matter.

Marion Stevens, a midwife and the coordinator for Women in Sexual and Reproductive Rights and Health (WISH) Associates, said that the country’s abortion services were “completely inadequate”.

According to Stevens, there has been a huge decline in the number of facilities offering abortion services. “Only 40% of designated facilities are operational,” she said.

“Not enough is being done to educate women about the options available to them if they chose to terminate a pregnancy,” she added.

Denise Hunt, country director for Marie Stopes South Africa, a provider of reproductive health services, called for illegal abortionists to be identified and for women to have greater access to information concerning their right to reproductive healthcare, including abortion services.

“We need to work toward normalising abortion instead of stigmatising it. In this way we can avoid deaths related to illegal abortion and empower women to prevent unplanned pregnancies,” she said.

Women will be disproportionately affected by the coronavirus pandemic, particularly considering their contribution as caregivers, in both professional and domestic settings
Read more
World

The bans are expected to be blocked in lower courts, but supporters plan to appeal such decisions until they reach the Supreme Court
Read more
World

The text, which the Republican-led senate sent to Governor Ivey's desk for signature into law, doesn't include exceptions in cases of rape or incest
Read more
Videos

Nomthandazo* thought her and her partner were happily expecting their first baby together. She was wrong.
Read more
Opinion