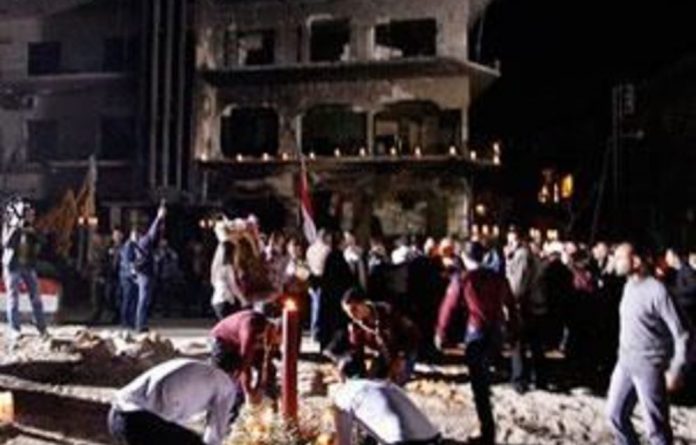 South Africa on Thursday condemned the escalating violence in Syria and has urged that country to seek a peaceful political solution.

“The situation continues to escalate despite calls … for the Syrian government and the armed opposition to stop the violence and settle their differences in a peaceful manner,” the department of international relations said.

South Africa had consistently expressed its deep concern about the deteriorating political, security, socio-economic and humanitarian situation in Syria.

“We condemn the violent loss of life in Syria and call for maximum restraint from all the parties to the conflict.

“We urge the parties to immediately stop the violence and commit themselves to finding a peaceful political solution, through a Syrian-led and owned, transparent and all-inclusive political process that will fulfil the legitimate aspirations of the Syrian people.”

“Such a process should ensure a guarantee of the people’s fundamental political rights and freedoms and deliver political reform, justice, human rights and socio-economic development.”

Strong support
South Africa welcomed and supported the appointment last month of former UN secretary general Kofi Annan as UN-Arab League special envoy to Syria, as well as the strong support expressed by the Security Council for his efforts.

Meanwhile, the US has warned Syria to cooperate with a UN-backed peace plan.

The BBC reported on Wednesday that US Secretary of State Hillary Clinton had urged President Bashar al-Assad to “take this path, commit to it, or face increasing pressure and isolation”.

The peace plan, put forward by Annan, was endorsed by the UN Security Council earlier this week, with support from Russia and China.

Wire service reports out of Syria on Thursday, were that government forces had entered the city of Hama, after a night of heavy shelling.

According to UN estimates, more than 8 000 people have been killed in the year-long conflict, which observers say could develop into a full-blown civil war.

Violence rages on
In Syria clashes flared, opposition activists said, a day after the Security Council called on all sides to stop fighting and seek a negotiated settlement.

UN secretary general Ban Ki-moon said the council’s unanimous statement had sent a clear message to Syria to end all violence but the appeal had little impact on the ground where rebels are seeking to oust President Bashar al-Assad.

Opposition sources said Syrian tanks had heavily shelled a large neighbourhood in the city of Hama on Thursday after fighting between Free Syrian Army rebels and pro-Assad forces.

The shelling destroyed houses in the Arbaeen neighbourhood of northeast Hama, which has been a centre of revolt. Opposition sources said at least 20 people had been killed in army attacks there in the last two days.

It is impossible to verify reports from Syria because authorities have denied access to independent journalists.

The British-based Syrian Observatory for Human Rights (SOHR) reported heavy fighting in al-Qusair, a town which lies close to the Lebanese border. Three residents died in the fighting and four soldiers were killed when rebels ambushed their checkpoint.

“Syrian forces are still not able to get inside the town because of fighting but they are shelling Sermeen and using heavy machine guns,” said SOHR head Rami Abdelrahman.

Fighting also erupted in southern Deraa, where several soldiers died in an ambush, he said, while Assad’s forces conducted raids in the eastern province of Deir al-Zor and coastal Latakia province to try to snuff out rebel fighters.

Rare moment of unity
The Security Council’s statement was supported by Russia and China, which had both vetoed previous Council resolutions, marking a rare moment of global unity over the crisis. It backed a peace drive by Annan and warned of “further steps” if Syria failed to respond.

Annan’s six-point peace proposal calls for a ceasefire, political dialogue between the government and opposition, and full access for aid agencies. It also says the army should stop using heavy weapons in populated areas and pull troops back.

But Turkish Foreign Minister Ahmet Davutoglu said the statement did not yet signal that foreign powers had found a unified position to create a plan of action.

“Of course that is not everything, that we simply have a common message. We also need to work out a common action plan,” he told reporters during a visit to Vienna on Thursday. “We have in this regard not been able to see a common position.”

The UN statement, which lacks the legal force of a resolution, talks of the need for political transition in Syria but it does not demand that Assad to step down — something both the rebels and the Arab League have called for.

“In clear and unmistakable terms, the Security Council called for an immediate end to all violence and human rights violations,” UN chief Ban said in Malaysia.

Syria’s official news agency appeared to play down the council statement, saying it contained “no warnings or signals”.

At least 8 000 people have died in the revolt, according to UN figures issued a week ago and diplomats have warned that without a swift resolution, the conflict could spread and degrade already tense sectarian relations across the region.

“More than five shells landed in the fields and in the village,” a farmer in al-Qaa said. Another resident said one shell had detonated next to the main school.

“Having seen the devastation inflicted on Homs, the Russian government should stop arms sales to the Syrian government or risk becoming further implicated in human rights violations.”

Russia has defended its long-standing military ties with Syria and has said it sees no reason to modify them.

Syrian Foreign Ministry spokesperson Jihad Makdesi said this week that 3 000 members of the security forces had died in the uprising, which Damascus blames on terrorist gangs.

Earlier this week, HRW accused opposition forces of committing rights abuses on state troops and their militia allies, including torture and summary execution.

Further sanctions
The European Union is set to impose further sanctions on Assad’s inner circle on Friday, including his wife Asma, who described herself as “the real dictator” in an email published by Britain’s Guardian newspaper last week.

“Tomorrow we will decide on new sanctions, not only against the Assad regime but also against the people around him,” German Foreign Minister Guido Westerwelle told Deutschlandfunk radio.

He added that the unanimous UN statement was an important contribution to solving the crisis in Syria.

“Assad cannot depend on the protective hand of Russia in the violence against his own people and that could accelerate the process of erosion of the regime,” Westerwelle said.

Although Russia has stuck to its demand that Assad must not be deposed by foreign powers, it has taken a sterner line this week, accusing the Syrian leadership of mishandling the crisis.

Analysts say this shows Russia is hedging its bets about Assad’s fate and is positioning itself for his possible fall.