Williams, Clijsters return with a bang 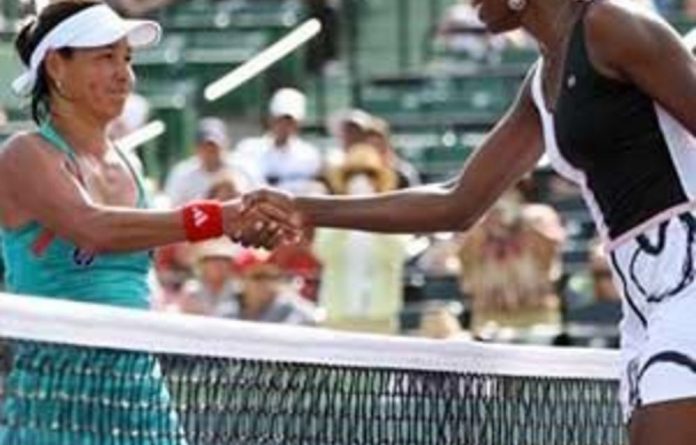 Former world No. 1s Venus Williams and Kim Clijsters made triumphant returns to the World Tennis Association after long layoffs with victories on Wednesday at the WTA and ATP Miami hardcourt tournament.

Seven-time Grand Slam champion Williams, who has not played a WTA event since pulling out of last year’s US Open, defeated Japan’s Kimiko Date-Krumm 6-0, 6-3 in 77 minutes.

“It was great to be back out there,” Williams said. “It was definitely a bit nerve-racking … but I was able to get a great start and settle in and play well against a really difficult opponent. It was definitely an ideal start.”

Williams announced at last year’s US Open she had been diagnosed with the auto-immune disorder Sjogren syndrome, an illness that saps her energy and causes pain in her joints.

“Just to be in this tournament is a huge win for me,” Williams said.

“That’s what I told myself going in, that this is a win. I have nothing to lose. I just tried to get in the tournament. There were a lot of tournaments I didn’t make.”

Playing smart
Williams, who did play doubles for the US Fed Cup team last month, pulled out of last year’s US Open after a first-round victory.

“At this point in time it’s important for me to play smart,” Williams said. “I’m an attacker. That’s what I do best and that’s what I tried to do today. I don’t have the time to give any points away. I have to stay really focused on my game plan.

“The good thing is I’m playing well. I know how to play, so I haven’t lost any steam in that. The fact that I can play tennis, that’s comforting for me.”

“It’s always tough to get that first match rhythm under your belt,” Clijsters said. “When it comes down to my game I felt I wasn’t quite going through my shots as I should have … I was just trying to find that rhythm, but on the other hand maybe forgetting to still play aggressive tennis. But as I started to feel more comfortable with the conditions and being in a match situation again I was hitting better, and that definitely showed in the second and third sets.”

Experience
Clijsters, who won at Miami in 2005 and 2010, skipped last week’s Indian Wells tournament to rest her injured ankle, the latest in a list of ailments in the past year that has also included a bad shoulder, wrist and abdomen worries.

“It’s just a matter of getting those matches again,” she said. “One thing I can count on is I have the experience. It doesn’t take me that long to get used to it again. But it has become tougher.”

Saying her ankle is at 95%, Clijsters pondered how close she came to downing top seed Azarenka in Australia and how strong the top-ranked player, now 23-0 for the season, has played.

“I felt like I was really close to winning that match,” Clijsters said. “She has been playing really good tennis. I think she’s in a state of mind where she feels very confident and is on a roll.”

She added: “It’s really showing in her game and in the way she approaches matches. I know what it’s like to be in that situation, where you feel very focused but at the same time playing freely, without any worries.”

Next matches
Williams advanced to a second-round match against Czech third seed, and Wimbledon champion, Petra Kvitova, who had a first-round bye, while next up for Clijsters is her first match against Germany’s 14th-seeded Julia Goerges.

Kvitova defeated Williams in 2008 in their only prior match.

“She has been playing very well in the last 12 months or so,” Williams said. “But I have had a lot of experience with playing well. I’ll go in focused on executing my game and trying my absolute best.”

First round matches began in the men’s draw with Chile’s Fernando Gonzalez making his ATP farewell as Frenchman Nicolas Mahut defeated him 7-5, 4-6, 7-6 (7/3). Gonzalez last month announced his decision to retire after this event.