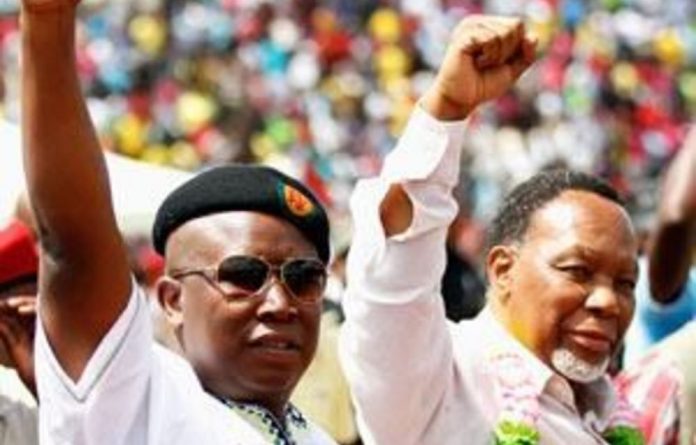 Embattled ANC youth league president Julius Malema will be cast firmly into the political wilderness should he carry out his threat to take the ruling party to court, sources within the ANC told the Mail & Guardian on Monday.

But if his strategy is to simply delay the conclusion of the disciplinary process until Mangaung, and he can find a senior ANC leader to champion him there, it could save — and even strengthen — his political career.

It is a massive risk, however, and party insiders don’t rate his chances.

On Sunday, Malema told supporters that, should his appeal fail, he would challenge his expulsion in court as he has been “left with no choice”.

“I said I would not go to court, but now I have decided to do so. I need no mandate and act as an individual whose rights have been violated,” Malema said at a youth league centenary rally at the Nkowankowa Stadium.

Trading blows
Malema is currently appealing his expulsion from the ruling party handed down to him in February.

But following comments made by President Jacob Zuma earlier this month, Malema and the league believe his fate is already sealed.

Zuma reportedly told a business breakfast hosted by the SABC and the New Age newspaper in Port Elizabeth the youth league should accept it needs a new president and “move on”.

“Once the process of disciplinary procedures has been concluded there will not be anything else to do thereafter — the youth league will have to move forward,” Zuma told attendants.

The league immediately slammed Zuma, saying it would “never allow any member of the ANC to openly undermine structures and processes of the organisation”.

“As a president of the ANC and country, President Zuma is unduly influencing the members of the NDCA to come to a conclusion which he has already announced publicly,” the statement read.

The ANC fired back, claiming Zuma’s views were consistent with the ANC’s constitution.

“The president did not pre-empt the current disciplinary process, if anybody has tried to, it is the ANC Youth League with their public pronouncements of agitating against the findings,” the party said.

Officially, neither the league nor the ANC are commenting on Malema’s decision to take the ruling party to court.

“We are not commenting on these weekend media reports at this stage,” league spokesperson Magdalene Moonsamy told the M&G.

“We will wait until all disciplinary processes are finalised before we make any comment on the matter,” ANC spokesperson Keith Khoza said.

A dangerous game
Historically, Malema would be entering dangerous territory by taking the ANC to court: the last party member to do so has not been involved in active politics since.

Former chief whip Mbulelo Goniwe took the ANC to court in 2007 after being suspended from the ruling party after being found guilty of bringing the party into disrepute.

Goniwe successfully sued the ANC for R1.2-million based on loss of earnings, which he has not yet received, and is just “an ordinary member” in the Eastern Cape.

“At best it would be a Pyrrhic victory for Malema as the ANC have a history of alienating those who drag political matters into the legal domain. He’s trying to cast himself as a political martyr and that is simply not the case,” Eusebius McKaiser, political and social analyst at the Wits Centre for Ethics told the M&G.

‘Buying time’
However, turning to the courts might turn out to be a shrewd move by Malema to delay the conclusion of the disciplinary process just long enough for it to be brought to the ANC’s elective conference in Mangaung at the end of the year.

There, the youth leader could attempt to have his sentence quashed by tabling a motion to nullify all disciplinary charges against him, which would then be voted upon by delegates.

As per section 11.3 of the ruling party’s constitution, the conference is granted the power to “review, ratify, alter or rescind” any decision taken by the ANC or its constituent bodies.

“Dragging the matter to court will not only buy him time, but also keep the media spotlight firmly upon him,” McKaiser said.

Malema is taking a huge risk, however, as his delaying tactics may cost him the support he needs at Mangaung.

To have a motion tabled at the elective conference, Malema would need a senior member of the ANC to champion him there, and should Zuma win another term as ANC president, any person riding on a Malema ticket would be almost certainly be sidelined thereafter.

Enter the deputy
But if Malema hitched his star to Zuma’s challenger for the presidency, a mutually beneficial relationship might emerge: political survival in exchange for the youth league leader’s popular support.

Enter the deputy president of the ANC and the republic: Kgalema Motlanthe.

It is no secret that Malema and the league have been actively campaigning for Motlanthe to replace Zuma as ANC president in Mangaung.

Motlanthe was present at the Nkowankowa rally in a thinly veiled display of support for Malema.

League supporters were even wearing T-shirts bearing the deputy president’s image and the words “Motlanthe for President”.

Close aides have also lent credence to claims that Motlanthe aspires to higher office, and say he is quietly biding his time before nominations for ANC leadership officially open in October.

But, according to Moltanthe’s spokesperson Thabo Masebe, any suggestions the deputy president has formed a personal alliance with Malema are “sensationalist”.

“Mr Motlanthe was deployed [to the Limpopo youth league rally] by the ANC after a request by the league. He wasn’t in attendance to show support for anyone,” Masebe told the M&G.

“As an ANC leader he is more concerned with fulfilling his duties as deputy president of the republic. Any reports suggesting otherwise bear no truth at all,” Masebe added.

However, Masebe did confirm Motlanthe’s readiness to serve in any structure of the ANC when “he is called to do so”.