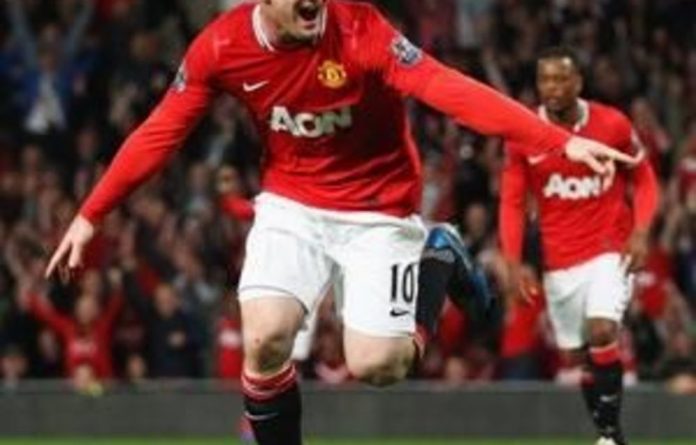 Wayne Rooney kept Manchester United on course for a record 20th Premier League title after hitting the winner in a 1-0 win over Fulham at Old Trafford on Monday.

Rooney’s 21st top-flight goal of the season, which arrived towards the end of the first half, proved enough to see off their spirited mid-table opposition.

The result sent Sir Alex Ferguson’s side, who have won their last six league games, three points clear of neighbours Manchester City at the top of the table with eight games remaining.

It was far from a vintage United performance but with their next four games against teams in the bottom six, it is difficult to see where United are going to slip up.

Having destroyed struggling Wolves 5-0 in their last outing, United were hoping Fulham would prove equally obliging opponents with the league delicately poised.

The London visitors were looking to avoid a ninth straight Old Trafford defeat, while Fulham’s failure to score a goal at the venue in seven hours of action also filled United with the belief that they could use this fixture to improve their goal difference.

Fulham spent the opening exchanges penned inside their own half.

A night of wasted chances
But this was a night for patience as United struggled to impose themselves until Rooney struck three minutes before the interval.

Rafael Da Silva spurned another chance when he shot straight at Schwarzer following good work by the impressive Antonio Valencia.

But the ruthless finishing which was so evident eight days earlier at Molineux was missing as Fulham created just as many chances as United before the interval.

Not for the first time this season, Clint Dempsey was his team’s main goal threat.

The US international twice tested David De Gea in the space of a few minutes, his second effort a lovely attempted curler from the edge of the area which had United’s Spanish keeper diving at full stretch to claw away.

Teed-up
Yet just when Fulham thought they had survived the opening half without damage, Rooney pounced from close range after Jonny Evans had teed-up the striker from Ashley Young’s 42nd minute cross following a mistake by John Arne-Riise.

The sighs of relief could be heard all around the ground.

United, who meet City in what could be a winner-take-all game on April 30, dominated possession after the interval but were unable to add to their tally.

Schwarzer was forced into action when Giggs played the ball over the top for Valencia, who seemed likely to score, but his shot was straight at the Australian international.

With 15 minutes remaining, United spurned a glorious chance to double their advantage.

Schwarzer, who had an excellent game, twice denied Young before Giggs had a goal-bound effort blocked by Brede Hangeland.

But referee Michael Oliver waved away Fulham’s appeals for a penalty as United hung on for their ninth win in 10 league games. — Sapa-AFP