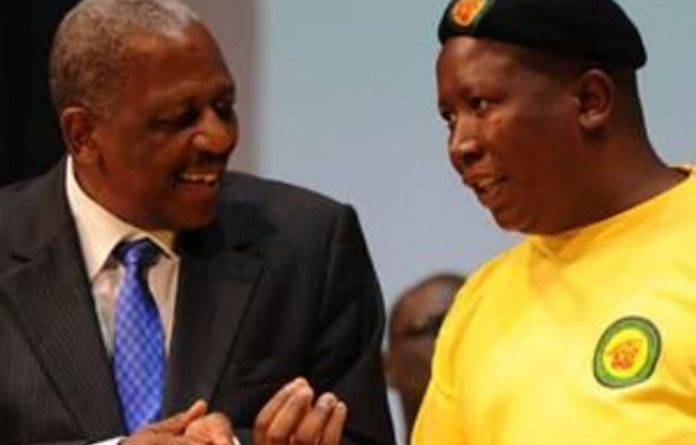 Julius Malema on Friday took a savage and unprecedentedly direct swipe at the man he considers his nemesis, ANC President Jacob Zuma.

Malema said he was not talking about succession within the ANC, but about the evaluation of leaders and their leadership. But he managed to accuse Zuma, less directly, of a wide array of things, including: surrounding himself with yes-men, considering himself above criticism, failing to have the necessary patience, failing to provide leadership, and bringing the concept of thought crime to the ANC.

“You must never allow a situation where somebody takes away your right to think,” he told the meeting, which was nominally about the financial exclusion of students at Wits, though that was not discussed. “Let’s say the youth league is wrong. You cannot punish them for thinking. You must punish them for acting. We are saying we are going to Botswana with a command team, that is what they are thinking. They have not done that.”

Malema cited a long list of figures the youth league had criticised without consequence, saying it was considered “radical” when doing so, but suddenly became “ill-disciplined” when the criticism was of Zuma.

But despite the vitriol directed at Zuma, it was other issues that showed a new, polished and theatrical side of Malema as an orator. He brought out a young white protégé he said he was mentoring in radical politics as proof that he had nothing against white people — while still demanding that white people hand over stolen land without compensation. He spoke with force, but also with carefully nuanced tone and pace, about the suffering of the poor. That stands in contrast to his usual appearances in which he suffered from either very poor delivery of written speeches, rousing delivery, or poor content when speaking off-the-cuff.

In response, ANC treasurer general Mathews Phosa tread very carefully around the accusations Malema made against the party, but did not avoid them altogether. He invited the audience to participate in the ANC’s policy-making process, making it clear that new ideas would not be shunned (on a party level), and that no single leader could shut out inconvenient youths.

Some of Phosa’s statements, however, seemed to bolster Malema’s argument, even if it was framed in the abstract. “We must not be afraid of ideas that don’t sound similar to ours,” Phosa said in closing. “We must not be threatened by different ideas. Ideas are the spears of tomorrow. We must not blunt those spears.”

Malema could face a final ANC decision on his expulsion within weeks, but said that he intended to turn to the courts to challenge the disciplinary process he was subjected to.