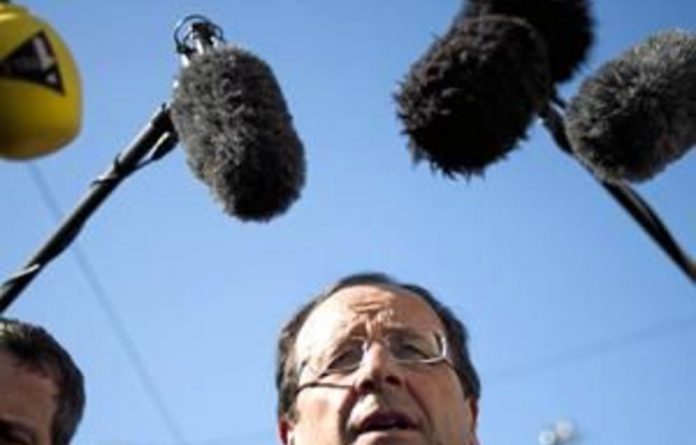 François Hollande, the front­runner in the French presidential election, has said that his first move, if elected, would be to challenge German Chancellor Angela Merkel’s domination of the campaign to save the euro and reopen negotiations on the fiscal austerity pact.

Hollande’s team is planning a trip to Berlin to confront Merkel after the May 6 second-round vote in which, polls suggest, he will defeat Nicolas Sarkozy. “I will renegotiate [the fiscal pact], improve it, then ratify it,” said Hollande at a recent meeting of centre-left leaders in Paris. He was referring to the pact signed by 25 European Union leaders this month, enshrining austerity as the foundation of the single currency.

Last week’s Toulouse killings may have dented the Socialist Party candidate’s chances as Sarkozy staged a law-and-order comeback, but polls consistently give Hollande a 10-point lead over Sarkozy in the second-round run-off.

Hollande owes Merkel little. She has snubbed him gratuitously in the French election campaign while conspiring, says the Hollande camp, to ensure that the centre-right leaders of Europe — in Spain, Italy, Poland and Britain — also steer clear of him. In Brussels and Berlin, the expectation is that Hollande will beat Sarkozy, though more narrowly than the opinion polls now indicate.

“You can feel a bit of a pause in the [EU] machinery,” said a senior diplomat in Brussels. “People are now factoring in the chances of a significant change of government and its impact on the euro. How will policies change? The Germans are really worried and they’re trying to get things done now, just in case.”

Hollande has declared that a Europe where one in four young people is jobless is a recipe for even bigger trouble than in the past two years. He has called Merkel’s treaty “the austerity pact” and says it will not work. Hollande wants it to be rewritten to focus on jobs and growth.

To do this, he wants the EU budget and European Investment Bank funds to be leveraged in the bond markets to raise billions for public works and infrastructure projects. He also wants the bank to act as the eurozone’s lender of last resort.

Merkel can be confident, because many of the measures in the fiscal pact that Hollande challenges are already EU law and he is not talking about repealing them. But if the German leader feels she has won even before Hollande joins the battle, she could still come unstuck in her own Parliament because she needs the backing of the opposition Social Democratic Party of Germany to ratify her pact by a two-thirds majority. “Merkel will have to adapt,” said Sigmar Gabriel, the party’s leader. “She thinks Europe is obese and needs to be put on a crash diet. In fact, large parts of Europe are suffering from heart disease and need treatment.”

Although a Hollande victory would provide a boost to the European left after years in the doldrums, its real impact may be less partisan in recalibrating the balance of power in Europe. Berlin is worried that its stewardship of the euro crisis has revived old stereotypes about Germany. A German foreign ministry strategy paper on Europe last month said: “Fears of an overmighty Germany have been awakened among some of our neighbours.” —