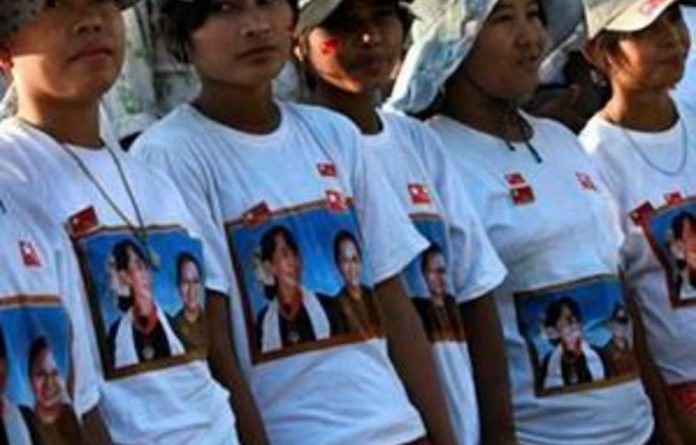 Burma votes on Sunday in its third election in half a century, a crucial test of its nascent reform credentials that could propel opposition leader Aung San Suu Kyi into Parliament and convince the West to end sanctions.

The United States and European Union have hinted that economic sanctions — imposed years ago in response to human rights abuses — may be lifted if the election is free and fair, unleashing a wave of investment in the impoverished but resource-rich country bordering rising powers India and China.

Suu Kyi, the Nobel Peace Prize winner held for 15 years under house arrest until 2010, complained last week of “irregularities”, though none significant enough to derail her party’s bid for 44 of 45 by-election seats.

“We’re happy to see that everything is going peacefully and we hope that the whole day can be run in a peaceful way,” said Ivo Belet, a member of the European Parliament who is in Burma to observe the election.

“We’ll make an evaluation later of course on the basis of all the polling sessions that we will be seeing. We will be working all day from this morning until tonight and also try to follow the counting of the votes.”

To be regarded as credible, the vote needs the blessing of Suu Kyi, who was freed from house arrest in November 2010, just days after a widely criticised general election that paved the way for the end of 49 years of direct army rule and the creation of a civilian Parliament stacked with former generals.

The Parliament has surprised the world by pursuing the most dramatic political reforms since the military took power in a 1962 coup. The government has freed hundreds of political prisoners, begun peace talks with ethnic rebels, relaxed its strict media censorship, allowed trade unions, and showed signs of pulling back from the powerful economic and political orbit of its giant neighbor China. It was rewarded last November when Hillary Clinton made the first visit to the country by a US secretary of state since 1955.

Business executives, mostly from Asia, have swarmed into the commercial capital, Rangoon, in recent weeks to hunt for investment opportunities in the country of 60-million people, one of the last frontier markets in Asia.

‘Irregularities’
Voting stations opened at 6am (11.30pm GMT), some under the watch of small numbers of observers from the European Union and the Association of South East Asian Nations (Asean).

The last election, in November 2010, was widely seen as rigged to favour the military-backed Union Solidarity and Development Party (USDP), the biggest in Parliament. Suu Kyi’s National League for Democracy (NLD) boycotted the vote.

But as Burma changes, so too, is Suu Kyi.

At 66, many see her now as more politically astute, more realistic. She has described President Thein Sein — a general in the former military junta — as “honest” and “sincere” and accepted his appeal for the NLD to take part.

Her top priorities, she says, are introducing the rule of law, ending long-simmering ethnic insurgencies and amending the 2008 Constitution ensuring the military’s strong influence over the country. She is expected to easily win a seat in Parliament, running in the constituency of Kawhmu, south of Rangoon.

While her party may end up with only a small number of seats, many expect her to exert enormous influence. Some Burmese wonder if conservatives would dare oppose her ideas in parliament given her popularity, especially ahead of a general election in 2015. Many want to be seen closely aligned with her.

But the election has not gone smoothly. She has suffered from ill health and accused rivals of vandalising election posters, padding electoral registers and “many, many cases of intimidation”. Some of these infractions, however, have been quite minor and are typical of elections across South-East Asia.

Skeptics in the democracy movement say she is working too closely with a government stacked with the same former generals who persecuted dissidents, fearing she is being exploited to convince the West to end sanctions. Others have almost impossibly high hopes for her to accelerate reforms once she enters parliament.

It was not clear when the election results would be announced, and whether they will be seen as free and fair. The government has invited a small number of election observers, including five from Asean, but they have been given hardly any time to prepare inside Burma.

Some US restrictions such as visa bans and asset freezes could be lifted quickly if the election goes smoothly, diplomats say, while the EU may end its ban on investment in timber and the mining of gemstones and metals. – Reuters

In early December, the International Court of Justice heard arguments filed by the Gambia against Myanmar for violations of the Genocide Convention. This included...
Read more
World

Suu Kyi was once the darling of the foreign media, but her silence over the persecuted Rohingya minority has drawn widespread condemnation
Read more
World