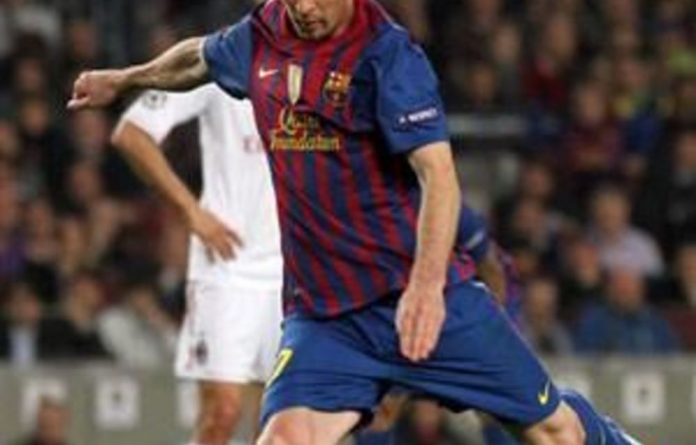 A double by three-time world footballer of the year Lionel Messi inspired holders Barcelona to a fifth successive appearance in the Champions League semifinals after a 3-1 win over AC Milan here on Tuesday in their quarterfinal second leg clash and win by the same scoreline on aggregate.

Messi’s brace of first-half penalties took him to 51 Champions League goals — at 24 the youngest to achieve this landmark — and a total this season of 14, breaking the previous record held by himself and Ruud van Nistelrooy of 12.

Andres Iniesta’s well-taken goal early in the second-half wrapped up the match and they will face wither Chelsea or Benfica in the semifinals as they bid to become the first team to retain the trophy since it became the Champions League in the 1992/93 season.

Antonio Nocerino had pulled a goal back for Milan to level briefly in the first-half but in the end there was no stopping Barcelona emulating the great Real Madrid side of the 1950’s in reaching five successive semifinals.

The Milan coach Massimiliano Allegri and players hit out at the referee over the penalty decisions but Barca coach Pep Guardiola claimed that they were clear cut.

“They were two penalties, if you pull someone in the area then that is what happens,” said Guardiola.

“We deserved to go through and I was very happy with the performance for the way that we were able to control the game especially after the third goal … To have reached the semifinal for the fifth time is something special and shows the strength of the club. To achieve it for one or two years is excellent but to do it for five is really amazing … I feel the same about my players whether they had qualified for the next round or not because they have already achieved so much they do not need to do more to prove themselves to me … We were against a team with a lot of experience and prestige so it was never going to be easy and there were always going to be talking points but they were two penalties and we did not complain about the ones that weren’t given in the first leg.”

Unlucky
But Allegri felt that his side were unlucky.

“The penalties were decisive and the second which was very debateable. It is never easy to play against Barca but overall they deserved to win,” he said.

A fired up Messi, who has been the top scorer in the Champions League for the past three seasons but had only scored once before against Italian opposition, had three chances inside the first 10 minutes.

He shot straight at the keeper from the edge of the area and then side footed wide after a delightful link up with Cesc Fabregas.

At the San Siro, Milan had looked composed and managed to disrupt Barca’s usual passing game but now they were looking edgy especially at the back.

One error after another led to Barca’s opening goal.

Massimo Ambrosini was dispossessed in midfield by Messi who tore into the area and then appeared to make the wrong decision in playing the ball back to Xavi.

Penalty
Full-back Luca Antonini dispossessed the Spain international but then went through the back of Messi and the referee awarded the penalty which the Argentine despatched into the corner.

Milan eventually began to settle and scored with their first real chance.

Robinho went on a jinking run and found Zlatan Ibrahimovic on the edge of the area, who picked out Nocerino and he calmly slid the ball past keeper Victor Valdes.

Milan had got themselves back into the game but then found themselves chasing the game again before the break, after another penalty was signalled for a shirt tug by Alessandro Nesta on Sergio Busquets as a corner was being delivered.

Messi stepped up and sent the keeper the wrong way from 12 yards.

Still Milan knew that a goal would put them through to the next round but their task was made a lot tougher after 53 minutes when Iniesta put Barca further ahead.

Messi was again involved with his shot blocked by Philippe Mexes and the rebound unluckily for the defender ran to Iniesta who slotted home clinically from close range. — AFP