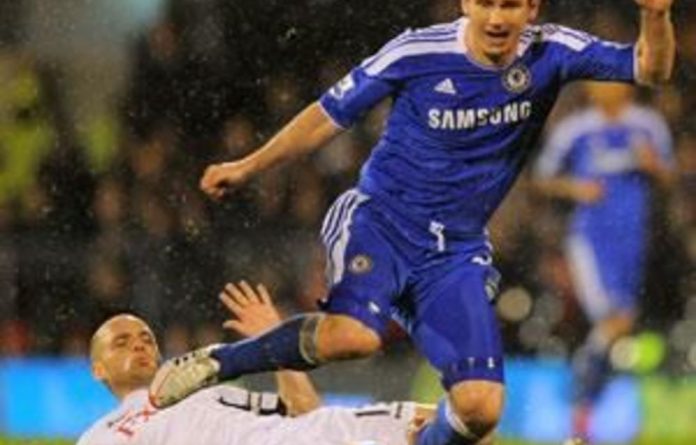 Clint Dempsey scored his 22nd goal of the season for Fulham to clinch a 1-1 draw against Chelsea on Monday and prevent its west London rival from climbing into the Champions League places.

The US attacking midfielder headed in the equaliser in the 82nd minute from Damien Duff’s corner, with the ball glancing off Chelsea defender Gary Cahill’s back and then going into the net.

“When you’ve got Clint in the team you know you’ve got a chance,” Fulham captain Danny Murphy said. “He’s been on an unbelievable run of form. He keeps bailing us out. When the ball goes in the box he’s usually the first on the end of it, and he got us out of trouble again.”

Sixteen of Dempsey’s goals have come in the Premier League, having also scored a double on Saturday against Bolton.

“Maybe just lucky, one of them things — to just go on a little bit of a run,” Dempsey said. “The first 15 minutes of each half I thought they were the better side, but then the game started to open up.

“We looked dangerous and towards the end of the game we played some really good football and created chances.”

Chelsea had been on course for a third successive league win after Frank Lampard scored from the penalty spot on the stroke of halftime for his 150th league goal.

Test of endurance
But the draw means the Blues not only missed out on fourth place but allowed Newcastle to move above them into fifth after having beaten Bolton earlier Monday. Tottenham remains fourth on goal difference despite losing to Norwich.

In a test of its endurance entering the home straight, Chelsea started a run of six games in 18 days on Saturday by beating Wigan.

Chelsea meets Tottenham in the FA Cup semifinals on Sunday, then takes on Barcelona in the Champions League semifinals.

Winning the European Cup for the first time could be Chelsea’s only way into the competition next season, with the team having been out of the top four in the league for two months.

“We are closer to fourth spot than we were,” said Chelsea interim manager Roberto Di Matteo, who replaced Andre Villas-Boas a month ago. “We were always playing catch up. The situation was difficult from the start. We have to look at it positively that we were closer than we were a month ago.”

Chelsea shot speculatively from distance to begin the rain-soaked match at Craven Cottage, with Fernando Torres and John Obi Mikel sending the ball over.

It was the hosts who soon provided more danger, with Chelsea goalkeeper Petr Cech forced into saves from Dempsey and Kerim Frei.

Penalty spot
That dominance counted for nothing when referee Mark Clattenburg pointed to the penalty spot after Salomon Kalou was clipped by Stephen Kelly after evading Danny Murphy’s two-footed challenge. Neither player was booked.

Chelsea had chances to extend its lead at the start of the second half, with Lampard shooting wide from 25 metres and then appealing for another penalty after going down under Brede Hangeland’s challenge.

“In the second half, we maybe couldn’t quite get the second goal and didn’t pose enough threat to kill the game off,” Di Matteo said.

The pressure from Fulham intensified as the game entered its last 10 minutes. A low strike from Dempsey was repelled by Cech, and Aaron Hughes later headed straight at the goalkeeper.

But Dempsey was allowed to rise unchallenged in the congested penalty area to bury the equaliser.

“He is always dangerous in the box if you get the delivery,” Fulham manager Martin Jol said.

Orlando could even had won the game for Fulham had Cech not been alert to keep out the header.

Jol revealed after the match that winger Bryan Ruiz is out for the rest of the season after breaking a foot in Saturday’s 3-0 win at Bolton. — Sapa-AP