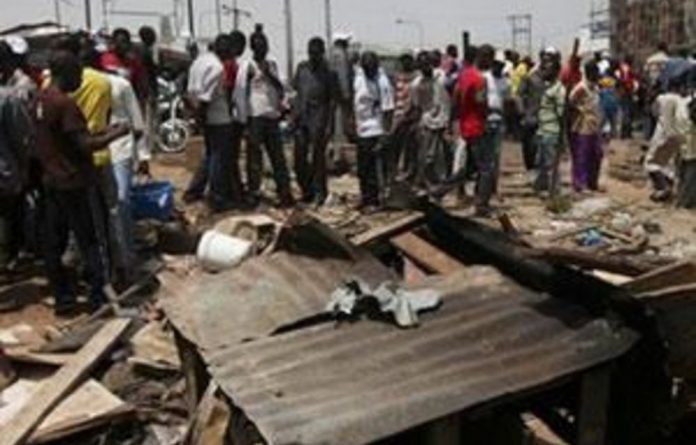 The suicide car bombing that killed at least 38 people in Nigeria on Sunday claimed victims across its religious and ethnic lines, showing clearly everyone is at risk in this nation often violently divided against itself.

Young Muslim men of the Hausa Fulani people of Nigeria’s north burned to death in Sunday’s blast, pinned under the weight of their motorcycle taxis. A passer-by from Nigeria’s south-western Yoruba people found himself thrown to the road in the explosion. The blast tore apart businesses owned by Christian Igbo people of the nation’s southeast.

All those who spoke on Monday said they wanted Nigeria’s weak central government to stop the violence from spreading across the country, including attacks carried out by a radical Islamist sect. However, authorities in the north-east said the sect known as Boko Haram had killed four people, as soldiers in the northern city of Kano found another car bomb ready to explode.

“Who are they really fighting?” asked one woman while looking over the scene of the Kaduna suicide attack on Monday, choking back a sob before walking away.

Sunday’s blast struck the capital of Kaduna state, apparently after the suicide bomber turned away from attacking a church holding a morning Easter service. The car exploded at a busy junction about 200 metres away, tearing apart makeshift restaurants made of discarded lumber there serving cheap rice patties to the city’s working poor.

The blast sent metal shards flying in all directions that left bullet-like holes in buildings and killed several people, witnesses said. At a hotel near the blast, the force of the bomb tore away the ceiling and blew out windows. A family staying just across from where the car detonated walked away unharmed, manager Stephen Uka said.

“They checked out with their lives,” he said.

Those men burned to death as local people tried to pull them away, scorching their own hands, Olowe said.

There was “no water to put them out,” Olowe said. Others blamed security agencies for taking too long to respond in a city where soldiers have been on the street since election violence last year. Administrators at St Gerard’s Catholic Hospital, which took in some victims, said they didn’t have enough ambulances to ferry the wounded.

Crowds gathered at the blast site on Monday, looking on as a road crew used pickaxes to cut away the small crater left by the bomb and concrete to repair the curb running alongside it.

Those gathered in small crowds nearby all seemed fixated on a choppy, mobile-phone video apparently taken immediately after the blast. It showed bleeding victims crying out incoherently, the lifeless dead lying still on the debris-strewn road. One man, bloody, simply crawls along the street unhelped as another slumps by an open sewer.

No one has claimed responsibility for the blast, though suspicion immediately fell on Boko Haram. Boko Haram, whose name means “Western education is sacrilege” in the Hausa language of Nigeria’s north, is waging an increasingly bloody fight with security agencies and the public. More than 390 people have been killed in violence blamed on the sect this year alone, according to an Associated Press count.

The sect, employing suicide bombers and assault-rifle shootouts, has attacked Christians and Muslims, as well as the UN’s headquarters in Nigeria. It has rejected efforts to begin indirect peace talks with Nigeria’s government and wants the introduction of strict Sharia law across the country, even in Christian areas, and the release of all imprisoned followers.

Boko Haram, which speaks to journalists through telephone conference calls at times of its choosing, could not be immediately reached on Monday.

Easter violence warnings
Both the UK and the US had warned its citizens living in the country that violence was likely over the Easter holiday, though Nigeria’s government publicly dismissed the alert. Attacks blamed on Boko Haram continued through the weekend into Monday as well.

In the north-eastern city of Potiskum, gunmen opened fire on a police officer and his family, killing the officer’s six-year-old daughter, Yobe State police spokesperson Toyin Gbadegeshin said. Earlier on Monday, gunmen killed three people when they attacked a police station, a church and a bank in the border town of Dikwa in the north-east.

In Kano, the largest city in Nigeria’s Muslim north, military spokesperson Lieutenant Iweha Ikedichi said soldiers discovered a car on Monday packed with explosives. Soldiers began searching the area for a man holding the remote control that could detonate the vehicle, though the area around the car had been secured, the lieutenant said.

Nigeria, a nation of more than 160-million people and more than 250 ethnic groups, is largely divided between a Christian south and a Muslim north. Kaduna, on that religious and ethnic dividing line, was at the heart of the violence that followed the nation’s April 2011 presidential election. At least 800 people died in that rioting across the country, Human Rights Watch has said.

In Sunday’s blast, members of Nigeria’s three largest ethnic groups became victims of the violence now sweeping the country. At St Gerard’s Catholic Hospital on Monday, a young Hausa Fulani man who had been selling food from a wheelbarrow near the blast lay in agony, his right hand shorn away by the explosion. Doctors were giving him a third blood transfusion.

A Yoruba man, Femi Johnson, lay in the bed beside him, his arms and legs burned by the flaming gasoline flung from the black market stall alongside the road.

“The bomb blasts [are] getting too much now,” Johnson said.

As Johnson spoke, a young man visiting another patient silently watched the camera-phone footage of the blast’s aftermath. — Sapa-AP