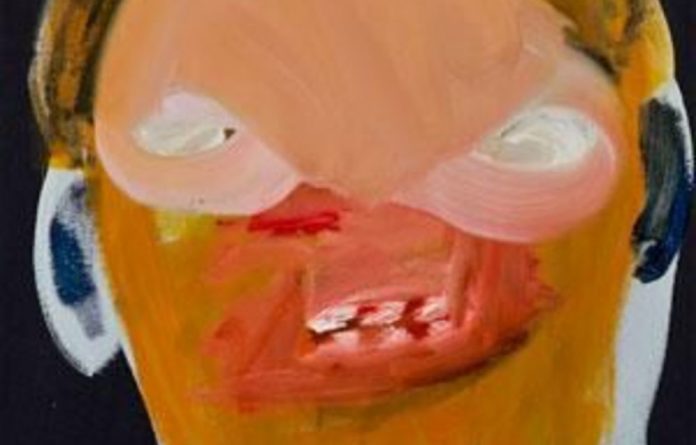 Giant portraits of friends and family litter the Smac art gallery in Stellenbosch. “The paint is decadent and the subject matter is indulgently personal,” says artist Georgina Gratrix, reflecting on the title of her second solo exhibition, aptly titled My Show.

Yet, despite this private dimension, Gratrix is not totally oblivious to the context of her work. South African art, she says while relating a story of an older artist, is “something to live up to”. It was Brett Murray who, in an obscure and cruel reference to her subject matter, said in a magazine interview: “I wish I could just stay at home and make paintings of flowers and puppies.”

“That really angered me,” Gratrix says, irritably. “Everything is fucking political — puppies are political.”

Reflecting on a portrait of her father, titled The History of Dad, she says that the “object should have the complexity of your own relationship” to the subject of the painting. The portrait should embody “the same shifting relationship you have as you get older”.

Indeed, her sensitivity becomes intriguing to witness. There is even something slightly invasive — a gaudy abstraction finding balance in the tenderness of the ­rendering.

Speaking of her forays into the established genres of portraiture, landscape and still life, Gratrix says these frameworks provide a useful structure in which to work. Referring to her massive four-panel, 5m-wide work titled Jungle, Gratrix likens the experience to “that Where’s Wally? moment” when the viewer has to search among the rich impasto for glimpses of parrots and other exotic birds that dot the ­landscape.

“My dad’s a bird-watcher and I grew up in Durban,” she says of the inspiration for the massive Rousseau-like work. “It was a challenge mixing those quantities of paint.” The breakthrough emerged when she took up industrial brushes used for house painting. With this move to large-scale materials the painting became more tactile and sculptural.

The concept of ugly
Indeed, this is true of most of her oils. The paint has a visceral quality that enhances the contours of her subjects, be they portraits — like the second in the series of fellow painter Ian Grose, titled More Famous Friends — or in her still lives Love You All The time or Please Call Me. Here paint acts to define the edges of her flowers and letters.

What makes her process so alluring is that her work plays on the concept of ugly, with a certain sensuality found in the vulgarity of her brushwork. There is something messy, but it is precisely what becomes so striking; in the intricacy of her brushstrokes (as in PeggyLou Party Face), Gratrix achieves a visual complexity that avoids muddiness through the ­simplicity of her colours.

This kind of tempered grotesque can also be seen in her watercolours, vaguely reminiscent of the work of Marlene Dumas. Yet their playfulness is what liberates the paintings from being entirely derivative. Blink, for example, relies on a simple human gesture described by two blue lines on a field of pink.

At a furtive glance one would liken Gratrix to the Berlin-based Carla Busuttil, whose solo exhibition, Exit Mode, opened at the Goodman Gallery on March 31. Because both shows have appeared concurrently, it is worth comparing the two high-profile ­exhibitions.

With detailed observation a striking difference becomes apparent. Busuttil’s brushwork smacks of frivolity and the paint on the surface of the canvas is mostly thin.

So, method is one aspect that helps to differentiate the two artists’ work. But there is something off-puttingly decorative in the simplicity of Busuttil’s work that Gratrix seems to avoid through her calculated choices that acknowledge the materiality of paint.

A work like Exit Dancing, for example, which is strikingly minimal and achieves its overall effect from the thin washes of colour, is ruined by the careless strokes through the sky that seem to lack integrity. It is as if Busuttil has rushed through the work without a meditative pause to stop to look at what she has done.

Naive painting may be in fashion, but there is just not that much to look at in the effort of Busuttil.

For this reviewer, there is more going on in the repetitively dark and dense impasto of Gratrix.

In her artist’s statement Busuttil acknowledges a debt: “As with Matisse’s use of single-hued blocks, I find colour a superior stand-in for detail. And this is how my figures develop.”

That may be. But in some instances, flat surfaces of colour end up looking, well, nothing more than flat.

My Show is on at the Smac Gallery, De Wet Centre, Church Street, Stellenbosch, until May 24. Exit Mode is on at the Goodman Gallery, 136 Jan Smuts Avenue, Parkwood, Johannesburg, until April 28