Weekend of queues and confusion for thirsty Diepsloot 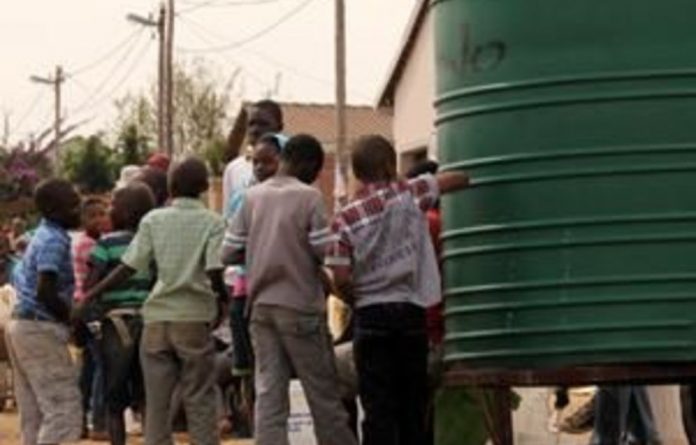 “No, it’s okay now, we tasted it and it’s fine,” said the man filling a container from the tap across the road from his home. “They say it’s mixing with shit, maybe you shouldn’t drink it,” cautioned a neighbour. “No, those people down there had a problem,” responded the first, pointing to the east part of the township. “You could smell it. Now you can see, it’s fine.”

Such exchanges were common in Diepsloot on Sunday, but not as common as the sight of men, women and children lugging water containers: buckets, mostly, sometimes on wheelbarrows but more often on their heads or shoulders. Dodging traffic across the N14 highway brought some to a company depot where a borehole fed two thin hosepipes at the far end of a two-hour queue, with no shade to be had even for the mothers with babies on their back. To the south, on the road towards the moneyed enclave of Dainfern and the shopping centres of Fourways, the queues were slightly shorter, but the walk back several kilometres longer, and uphill.

On Friday, Johannesburg Water warned the residents of Diepsloot not to drink tap water. Contractors working on a sewage line damaged a water main, and it was feared the water supply might have been contaminated. So the city rolled out water tankers and water points instead.

“We placed 64 stationary tanks throughout Diepsloot, and we also have 12 mobile tankers roaming the streets,” said Johannesburg Water spokesperson Millicent Kabwe on Sunday. “Businesses are also catered for; Diepsloot Mall has its own tanks and we’re keeping them filled.”

But those provisions fell woefully short. During several hours in the township on Sunday, the Mail & Guardian could track down only one tanker making the more than 40km round-trip from Diepsloot to a filling point in Lanseria. At the stationary water points — few and far between, and only occasionally refilled by tankers — queues were long. Rather than wait for those official supplies, residents made their own plans.

“We just hope the borehole will hold up, but as long as it does we’ll keep pumping,” said the manager of a nearby business. “We have to do what we can. And yes, we’ll make a note of it under our CSI [corporate social investment] spending for our empowerment paperwork.”

Some nearby water companies ran their own water service for employees: an odd assortment of containers on the back of light trucks. Some residents hitched trailers to cars, and neighbours with bakkies suddenly found themselves very popular. But many said they’d just take their chances with the water that smelled and tasted perfectly fine. As for boiling it before drinking, or doping it with bleach, that would just cost money, residents said. “We’ll know it’s bad if we die, hey?” joked a young man, but added that he’d been giving his baby sister tea to drink, just in case.

On Sunday afternoon few people knew that an initial test for contaminants was negative, as had been the result of a subsequent sample taken on Saturday. Nobody heard the advice that came from Johannesburg Water early on Sunday afternoon to continue avoiding tap water until Monday afternoon, when results were expected from a final test following a flushing of the system. Nobody was particularly happy, though.

“They say if I give my child the water she could get sick, and where will I find a doctor?” asked a mother, still breathless after a dash across the highway with two full buckets and a baby. “Maybe if a car hits me they’ll send the ambulance. That would be better.”