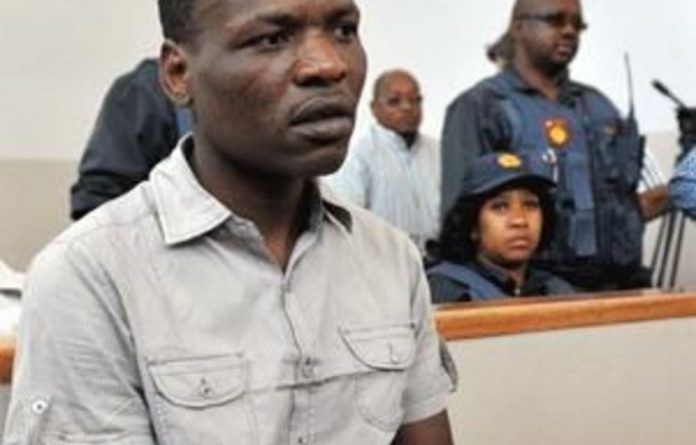 The state has no evidence against a minor accused of killing right-wing leader Eugene Terre’Blanche, the high court sitting in Ventersdorp heard on Wednesday.

The boy’s lawyer, Norman Arendse, said in his closing argument that the state was relying on hearsay made by his co-accused Chris Mahlangu about the youth’s role in the crime.

“There is no other evidence against accused number two.”

Mahlangu and the teenager are charged with beating Terre’Blanche to death in his farmhouse outside Ventersdorp, North West, on April 3 2010.

Both have pleaded not guilty of murder, housebreaking and robbery with aggravating circumstances. Mahlangu has claimed he acted in self-defence. The teenager has denied involvement in the crime.

“There are so many danger signals in this case, my lord. Not only has the state got no case, they cannot beyond reasonable doubt prove their case against [the youth].”

He asked what had happened to a video of the crime scene and the disappearance of semen-like fluid seen on Terre’Blanche’s genitals in photos.

Manipulating evidence
Arendse touched on allegations that Mano manipulated other police officers’ statements and the credibility of the notes he made on statements by the two accused.

He argued that Mano was not aware of the new Child Justice Act, which was implemented a few days before the murder.

“When he was asked about it [in court] he just drew a blank,” Arendse said.

He argued that Mano deliberately deprived both accused of sleep and unlawfully removed them from the Ventersdorp police station and took them to his office in Klerksdorp.

“The case is based on unreliable and dubious evidence manipulated by Mano. Huge unanswered questions remain which cast much doubt on the quality of the state’s evidence,” Arendse said.

Earlier on Wednesday, the state called for both Mahlangu and the youth to be found guilty.

“The state’s submission is that both accused should be found guilty as charged on all counts,” prosecutor George Baloyi told the court.

‘Made up stories’
Baloyi described the case as extraordinary because the two did not run away after the murder, instead walking a great distance to alert the police.

Baloyi dismissed Mahlangu’s claim of being sexually assaulted by Terre’Blanche as “made up stories”.

“We submit that there was no mention of any sexual assault.”

Mahlangu and the youth declined to testify. The State and the defence closed their cases last week.

Baloyi said Mahlangu implicated the youth in the crime when he phoned the police on the night of the murder and again when the police arrived at the farm.

However, these admissions did not form part of Mahlangu’s written statement made on the night of the murder. The statement was not admitted as evidence.

Baloyi said Mahlangu on numerous occasions referred to “we” and “they” when he explained what happened.

Police handling
He asked the court if the youth should be allowed to “go scot free” considering his statement on the night of the murder — in which he stopped short of saying he participated in Terre’Blanche’s murder.

The police’s handling of the youth was brought into question throughout the trial.

Lawyers for both accused argued that the correct procedures were not followed and that the two were not fully aware of their rights.

Baloyi said the police were brutally honest in admitting during the trial that they were not aware of the Child Justice Act on the night the arrests were made.

During his closing argument, Mahlangu’s lawyer Kgomotso Tlouane claimed that if the two accused were guilty they would not have gone to the trouble of calling the police but would have fled the scene.

He said it was “an injustice” that untrained translators were used to take their statements on the night of the murder. There was no guarantee the two had understood their rights, he said.

The trial continues on Thursday. — Sapa