My, what big eyes you have 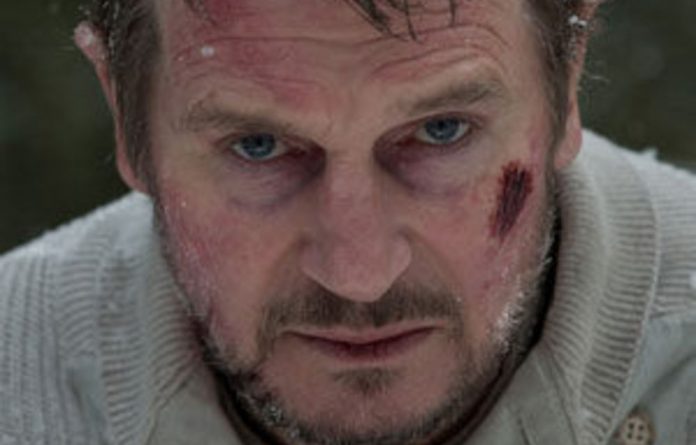 Months before the release of The Grey, this newspaper had already received a message from some lupine anti-defamation league, claiming that the portrayal of wolves in the movie was a gross calumny upon these peaceable creatures. They seldom, if ever, said the letter, attack or devour humans.

This seems likely: wolves are sure to be less predatory, violent, relentless or vengeful than humans. If they weren’t, there would be more of them left alive. They’re still pretty scary, though, and if you want to make a film that’s a kind of horror movie, with people being picked off one by one by a monster or a pride of monsters, then wolves aren’t a bad choice. There are resonances, at least, in the collective narrative memory of such creatures being fairly nasty; remember the story of Little Red Riding Hood.

Perhaps The Grey should have carried, up front, one of those warnings you get in novels: “No wolves in this movie are based on any wolves living or dead, and if they are they are treated fictionally.”

So these fictional wolves are after a bunch of fictional humans, but first we have to get the basic elements of the story lined up. Liam Neeson plays a specialist wolf-hunter assigned to protect a group of men working in some snowy waste. I can’t remember what they are working on — an oil well, is it? Mining of some kind?

Whatever the case, they don’t get to their destination. They are flown out of base camp, but their small plane crashes in the aforementioned snowy waste. Barely have the survivors picked themselves out of the wreckage and done some basic salvaging than they realise they have more to do than trudge a long way across the snow — they will have to avoid those man-eating wolves too.

Inherently meaningless
Before they get on the plane, though, we have had a prelude in which Neeson’s character is given some backstory. This is to assure us that our protagonist is a “rounded” character, that he has some depth, and two different flashback streams are used to do this. One of them shows us a beautiful woman who gazes lovingly at Neeson and says loving things; the other has to do with his father and a motto that will be repeated at key moments in the movie (as well as, in part, on the poster). This apothegm is about choosing the day you will die, or something like that — it’s inherently meaningless, as most such movie mottos are, but if repeated sonorously at the right moments it serves to give the movie some feeling of having a moral point or some lesson to impart.

Not that it has a moral point; it’s about trying to survive. And its only lesson, as far as I can see, is that if you are stuck in a snowy waste you should try not to get your head bitten off by an oversized wolf. Characters in most movies, however, must have the appearance of moral agency, and a repeated motto helps to remind us (and them) of that.

Once the survivors of the plane crash have discussed the possibilities of rescue, which are of course slim because of snowstorms and so on, and have decided that they can’t stay in the wreckage forever, The Grey is, as mentioned, pretty much a horror movie in shape. Or, let us say, it’s a horror movie in the form of a chase: the wolves’ victims are on the run, not trapped in some lakeside cottage or the like, getting picked off by a monster, as happens to so many horror-movie victims. There is, thus, in The Grey at least a sense of movement, of progress from Point A to Point B, even if we have no idea where either Points may be.

Certainly, the movement between Points A and B is thrilling, in the way chases are thrilling. Who will get munched next? How will they fend off the next lupine assault? There are plenty of jarring frights, tense stand-offs and icky, munchy moments.

Contrived and contemporary
Besides showing us some impressive landscapes, the cinematography alternates between classically framed shots and those contrived to look like blurry, dark, hand-held camerawork. This is all pretty artfully done. It is a well-known principle of contemporary moviemaking that the hand-held technique practically screams “Verisimilitude!” even as the relevant character screams “Oh, God, don’t let the wolf eat my leg, urgghh urgghh.”

The contrivances are obvious, but The Grey has the advantage of usefully delineated characters, which is to say they have some individuality. This helps us to care about who is likely to get munched next. Neeson is a solid centre; one suspects that he could provide that solidity to almost anything (Wrath of the Titans is the exception that proves the rule). As well-constructed piffle, The Grey serves its purpose, scaring us into excitement. Just remember that, in the real world, wolves are really rather nice.