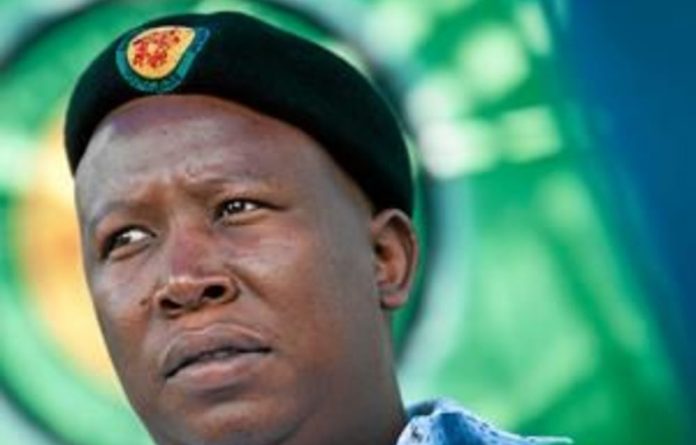 In an extraordinary show of political support, about 700 supporters of embattled ANC Youth League president Julius Malema flocked to his home in Flora Park in Polokwane on Saturday, effectively giving the ANC the middle finger.

As per the conditions of his temporary suspension from the party, he was not allowed to attend the Limpopo youth league’s elective conference, where his ally and friend Jacob Lebogo was reelected unopposed to the powerful position of provincial secretary on Saturday night.

But the delegates would have none of it and disrupted the opening session on Friday, refusing to continue with proceedings unless Malema was part of it or that they are allowed to visit him at home.

It was a sight to behold.

The usually quiet neighbourhood was flooded with excited supporters who sang and danced outside his house. Delegates’ chants of “Where is Julius? We want Julius? Julius pray for us” echoed through Mopani Street, which was transformed into a sea of black, green and gold.

Emboldened by the unprecedented show of support, Malema pulled no punches when he addressed the crowd.

“If I address you I do so without any fear or favour because this is my house. Nobody, no matter how powerful they are, will tell me you can speak to this delegate or you can’t speak to that delegate. You are not delegates, you are my visitors, my friends — this is your house …Those who think they have control in this house should have the courage to tell me in this house. This is my office.”

“I’m not allowed at their house. But I’m not intimidated and I’m not scared … If I’m not wanted I will never impose myself, whatever they decide [on the appeal of his expulsion] I will never change my mind about my views … about them or their leadership style,” said Malema.

“It’s not only the disciplinary committee. They unleashed all state institutions against me. They want to do everything in their power to deal with me. They are welcome to come to this house and arrest me. I have done nothing wrong,” said Malema.

The ANC under President Jacob Zuma’s leadership has “continued to abuse the power they have”, said Malema adding, “When all is done, history will judge them”.

Referring to the proposed Protection of State Information Bill, which the ANC is dead set on making law despite calls that the Bill may be unconstitutional, Malema said: “They going to arrest us. After us, they will arrest you [the media]. Their direction is very clear they are going there, they’ll arrest everybody who disagrees with them.”

“But we are not shaken,” said Malema to rapturous applause.

Turning his attention back to his visitors, he said: “You have fought for our people. They appreciate the good fight. I’m speaking about the rank and file … We will be liberated by ordinary masses”.

“Those in MK [Umkhonto weSizwe] will tell you that when the commander is killed in a battle they never surrendered. some of us as we fall on the way and become casualties of this war … but this is not a struggle of individuals, but of a collective”.

‘Soldier on’
“Comrades you can’t fail this generation,” said Malema.

“We have never sold out in our lives and we will not sell out now. We are prepared to take this attack. The only option you have is to soldier on, continue to mobilise the South African society to fight for economic emancipation. You must ensure that the youth league remains intact. It’s time to unite. You must come out of that conference with one voice.”

Malema said he was expecting that the ANC’s national disciplinary committee would uphold his expulsion. In a warning to the ANC leaders he said that he will “continue to be a political influence and to preach the good word of the ANC”.

“They will be old … we are coming back to lead the ANC … It doesn’t matter if we come back in five years or 10 years … Very soon we’ll come back.”

He said he would never take the party to court because it would be tantamount to taking himself to court because “I am still a member, an expelled member. The member will remain, the expulsion will go.”

“If this is the end there’s no problem, you [party branches] will liberate us. I’m not bitter or angry. We have fought a good fight. This is not the end but the beginning of the battle and you [league members] must continue to fight,” said Malema before leading the masses in the hearty rendition of the struggle song Dubul’ ibhunu.