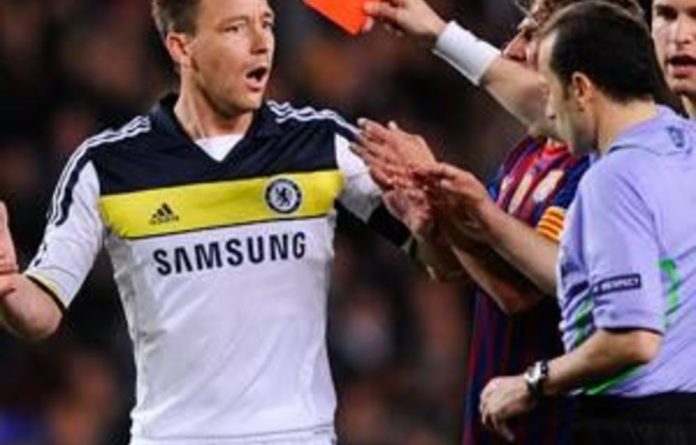 Lionel Messi missed a penalty as holders Barcelona were sent crashing out of the Champions League semifinals on Tuesday after 10-man Chelsea battled to a 2-2 draw.

Chelsea, leading 1-0 from the first leg, snatched a 3-2 aggregate win on a night of extraordinary drama which saw the Premier League side recover from 2-0 down and Terry’s dismissal.

Barcelona looked to be cruising to victory after goals from Sergio Busquets and Andres Iniesta put them 2-0 up in the first half.

But a superb counter-attack and chip from Ramires put Chelsea ahead on away goals and despite a furious Barcelona onslaught the 2008 finalists held firm.

In the dying minutes substitute Fernando Torres raced clear as Barcelona pressed for a winner and rounded Victor Valdes to kill off a quite remarkable contest.

An extraordinary first half had seen a disciplined Chelsea manage to frustrate Barcelona in the face of relentless pressure despite the setback of losing Gary Cahill to injury after only 12 minutes.

Cahill had wrenched his knee after twisting to thwart a Barcelona attack after six minutes and attempted to battle on before being replaced by Jose Bosingwa, with Branislav Ivanovic moving to centre-back.

Defensive reshuffle
Despite the defensive reshuffle Chelsea’s thin blue line held firm, with Petr Cech saving brilliantly with his leg from Messi on 19 minutes before Terry slid in desperately to block Iniesta’s follow-up.

At the other end Chelsea were limited to pumping long clearances for Didier Drogba, who, just as he had done at Stamford Bridge a week earlier, was forced to plough a lonely furrow up front.

Nevertheless Barcelona’s nervousness at Chelsea’s aerial threat was plain to see, and it was a jittery punched clearance from Valdes that led to the substitution of Gerard Pique after a heavy collision with the defender.

Yet it was only to be a matter of time before Barcelona’s monopoly of possession yielded its reward and the breakthrough came on 35 minutes, the start of a catastrophic period for Chelsea.

A headed Drogba clearance fell only as far as Dani Alves on the edge of the area who picked out Isaac Cuenca on the left, who in turn rolled his pass across the six-yard box for an unmarked Busquets to side foot home.

It got worse for Chelsea a minute later with Terry’s moment of madness, a dismissal which left the English side with neither of their starting centre-backs.

It was not long before the makeshift nature of Chelsea’s defence was exposed and Barcelona struck what looked to be the killer blow on 43 minutes.

Camp Nou rocked with delight but incredibly within minutes Chelsea were back in the game and ahead on away goals when Ramires scored.

Empty net
Lampard’s magnificent pass sent the Brazilian racing in behind the Barcelona back four and when Valdes advanced the rangy midfielder clipped an exquisite chip into the empty net for 2-1 on the stroke of half-time.

The Chelsea goal gave Barcelona something to think about but the Catalans were swiftly back into their stride in the second half.

And when Drogba brought down Cesc Fabregas to concede a penalty the match again seem to have swung in Barcelona’s favour.

Yet Messi, the most prolific scorer in Europe this season with 63 goals, implausibly crashed his spot-kick against the bar and Chelsea were let off.

But the pattern of the game had been set, and what followed was 40 minutes of excruciating tension for Chelsea as Barcelona took up permanent residence on the edge of the visitor’s penalty area.

Chelsea, however, somehow managed to thwart their tormentors, closing down relentlessly and never allowing Messi, Xavi and Iniesta the freedom to work the ball into dangerous positions.

All too often Barcelona’s attempts to add width foundered as they cut the ball back into the middle where Chelsea’s wall of bodies stood firm.

Messi had a goal disallowed before Cech tipped a shot from the Argentinian onto the post.

Then with Barcelona caught pressing up field Torres raced away clear of the home sides defence and touched round Valdes to score and Chelsea were through.

The win came at a cost, however, with Ramires, Ivanovic and Meireles all picking up bookings that will keep them out of the final.

Out in the cold
Chelsea captain John Terry on Tuesday apologised for his red card moment of madness against Barcelona that ruled him out of next month’s Champions League final.

The Chelsea icon was given his marching orders on 37 minutes of an epic encounter at the Camp Nou which saw the Premier League side fight back from 2-0 down to draw 2-2 and clinch a 3-2 aggregate win over the Catalans.

Terry’s dismissal for a foul on Alexis Sanchez threatened to trigger a drubbing for Chelsea, who conceded a second goal to Andres Iniesta soon afterwards following Sergio Busquets’ opening strike.

However the veteran defender watched from the bench as goals from Ramires and Fernando Torres sealed a remarkable comeback.

Former England captain Terry admitted however that the result was bittersweet as he will be denied the opportunity to lead Chelsea in Munich.

“Sanchez was darting in behind me. I’ve seen the replay and it does look bad,” Terry told Sky Sports.