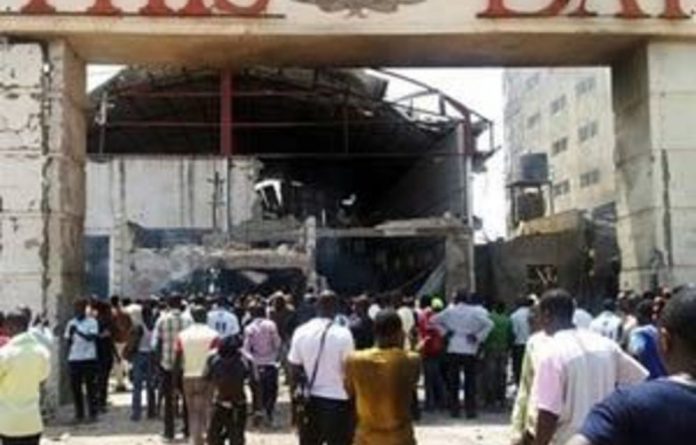 Two bomb blasts targeted the offices of Nigerian newspaper This Day on Thursday, in the capital Abuja and the northern city of Kaduna, killing at least three people, officials and witnesses said.

This Day is based in southern Nigeria and is broadly supportive of President Goodluck Jonathan’s government, the main target for extremist insurgent group Boko Haram. There was no immediate claim of responsibility for the bombings.

“Someone, a suicide bomber, ran into the building with the bomb about an hour ago,” Nigerian Red Cross spokesperson Nwakpa Nwakpa told Reuters at the scene of the Abuja blast.

“We have collected three bodies but before we got here people had already been moved,” he added.

A Reuters witness saw the aftermath of the second blast in Kaduna. Policeman Mohammed Abubakar confirmed on the scene that it was a bomb and said at least one person had been killed.

A Reuters witness saw sirens wailing as police and fire fighters rushed to the scene and grey smoke billowed from the building, whose windows were all smashed.

Soldiers and police cordoned off the area, while emergency workers evacuated wounded on stretchers to waiting ambulances.

“The suicide bomber came in a jeep and rammed a vehicle into the gate,” said Olusogen Adeniyi, chairperson of the This Day editorial board. “Two of our security men died, and the obviously suicide bomber died too.”

Boko Haram has been fighting a low level insurgency against Jonathan’s administration for more than two years and has become the main security menace in Africa’s top oil producer.

It has killed hundreds in bomb and gun attacks this year, mostly in northern towns and cities.

In August last year, the extremists carried out a suicide car bombing at the United Nations building in Abuja that killed 25 people and prompted a ramp-up in security measures in the capital of the continent’s most populous nation.

This Day‘s publisher, Nduka Obaigbena, is a prominent celebrity figure in Nigeria and puts on music, art and fashion events in cities in around the world. — Reuters