Stormers flyhalf grants them win over the Force 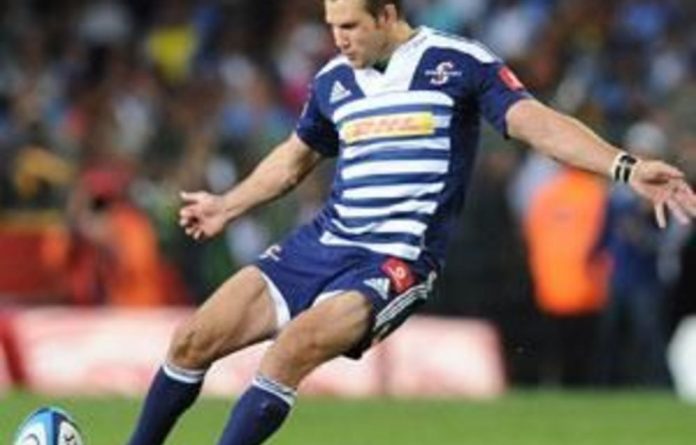 Flyhalf Peter Grant scored the only second-half try in the 49th minute and kicked a shaky conversion to help give the Stormers a 17-3 win over the Western Force in a rain-drenched Super Rugby match Saturday.

The Cape Town-based Stormers led 7-3 at halftime before Grant’s try and his subsequent conversion which clanged off the right goalpost into successful two-point territory for the visitors.

It was the third win in four away matches for the Stormers, who have eight wins in nine matches ahead of next week’s bye following their Australian and New Zealand road trip.

Bryan Habana scored a controversial first-half try for the Stormers, converted by Grant, who also kicked a penalty for the winners.

Habana intercepted David Harvey’s ambitious pass to score the opening try of the night in the 20th minute, running 60 meters before diving under the posts untouched.

But replays showed the ball slipped out of Habana’s arms just inches short of the tryline, with the referees not close enough to see the mistake or ask for a video review.

Going for Genia
As the match began, the Queensland Reds confirmed media reports that their Wallaby scrumhalf Will Genia had defected to the Force for next season.

“I believe Queensland Rugby made the best offer we could to retain Will’s services in Queensland,” Reds chief executive Jim Carmichael said in a statement. “However, the opportunity presented to head west was ultimately more appealing to Will.”

Other media reported that Force captain and open side flanker David Pocock would turn down an approach from the Brumbies to remain in Perth.

Pocock said after the match that “nothing had been confirmed” about his or Genia’s contracts.

He added about Saturday’s match: “I don’t think you can fault our effort, we came up against some good defence.”

Lock Andries Bekker, who returned from injury to become the third captain in as many weeks for the Stormers, said his side adapted well to the slippery and wet conditions.

“I think we started off a bit slow,” Bekker said. “We tried to throw the ball around a bit, but that didn’t work in these conditions. So we relied on our defence.”