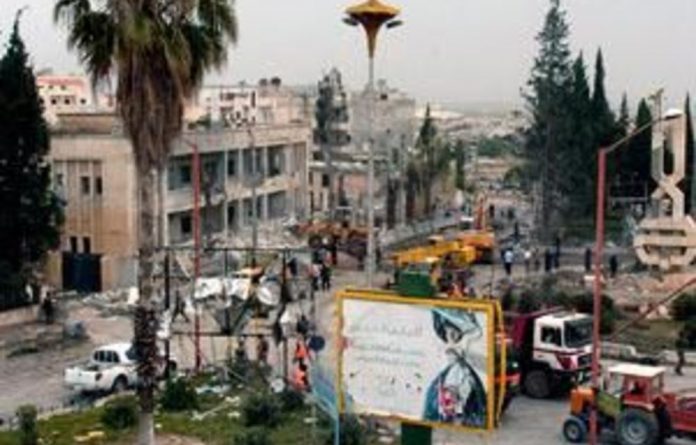 Nine people including Syrian military personnel were killed and 100 wounded on Monday in bomb blasts near security service buildings in Idlib, state media said, as a bombing campaign intensified against government targets.

Twin explosions, the latest to disrupt a shaky UN truce, blew fronts off nearby buildings and left craters in roads, according to images on state television which showed people at the scene condemning the rebels who are fighting to oust President Bashar al-Assad.

State television blamed both blasts in the restive north-western city on suicide bombers.

A prominent human rights activist said they appeared to target local headquarters of intelligence services for the air force and the army, two of the many security agencies that have helped keep the Assad family in power for four decades.

The activist, at the British-based Syrian Observatory of Human Rights, put the death toll at over 20. Syria bars most independent journalists, hindering verification of such figures.

State media said monitors from the UN team sent in to oversee the 18-day-old ceasefire were visiting the scene in Idlib. Foreign ministry spokesperson Jihad Makdissi said the head of the monitoring mission, Norwegian general Robert Mood, was being briefed on “violations by armed opposition”.

Mangled corpses
Official media broadcast video of flattened cars and mangled corpses lying under tarpaulins. One man, standing amid rubble, said: “My wife and I were asleep in bed and then there was a loud explosion. It rocked the whole house and woke us all up. My wife and I and our children all ran outside.

“Is this the freedom they want? How can it be the fault of children? How can the innocents be to blame?”

One woman said one of the bombs had been planted by a group of men who ran away shortly before the detonation. However, state television later said they were suicide attacks.

The UN says security forces have killed 9 000 people in the uprising, which started as peaceful mass protests inspired by rebellions in the Arab world but which is becoming an increasingly bloody guerrilla insurgency.

Damascus says 2 600 from its forces have died at rebel hands and has accused the United Nations of turning a blind eye to “terrorist acts” committed by those fighting for the removal of Assad, who succeeded his late father, Hafez al-Assad, in 2000.

Although the rebels are far from a unitary force, their tactics appear to be shifting from small scale ambushes on checkpoints and military patrols to audacious assaults on infrastructure and symbols of the Assad state.

Bomb-making
“We are starting to get smarter about tactics and use bombs because people are too poor and we don’t have enough rifles. It is just no match for the army. So we are trying to focus on the ways we can fight,” said one anti-Assad fighter who claimed to be in command of a militia unit.

“The rebels are getting better at bomb-making — as you know, desperation is the mother of invention,” he said in neighbouring Lebanon.

On Saturday, gunmen in inflatable dinghies killed several people in a seaborne assault on a military unit near the port of Latakia and militants fired rocket-propelled grenades at the central bank in Damascus on Sunday, causing slight damage.

An Islamist group calling itself al-Nusra Front has claimed responsibility for a suicide bombing that killed at least nine people, most of them security officials, in Damascus on Friday.

Also on Friday, authorities in Beirut seized a ship carrying a large consignment of weapons from Libya, including rocket-propelled grenades and heavy calibre ammunition that could have been smuggled into Syria.

Monitors trickling in
Lebanese security sources said on Monday that Syrian soldiers had fired at a group of four skiers along the mountainous border after they mistook them for smugglers. One Lebanese skier was wounded. Two other Lebanese and a Swiss citizen were unharmed.

UN ceasefire monitors are trickling in to Syria, with 30 out of a planned 300 now on the ground. Their Norwegian commander, Major General Mood, a veteran of previous Middle East peace missions, acknowledged the huge task awaiting the unarmed mission but said he was confident it could make headway.

An activist in the restive central city of Homs, speaking via Skype, said violence had dropped sharply since the observers deployed a permanent two-man team there last week.

“There are still violations but the shelling and mortar fire has stopped,” Karam Abu Rabea said. “We have insisted that the observers stay in Homs because we know if they leave [the attacks] will continue.”

Despite the relative calm in Homs, activists said at last 39 people were killed across the country on Sunday, including civilians, security forces and rebels. — Reuters