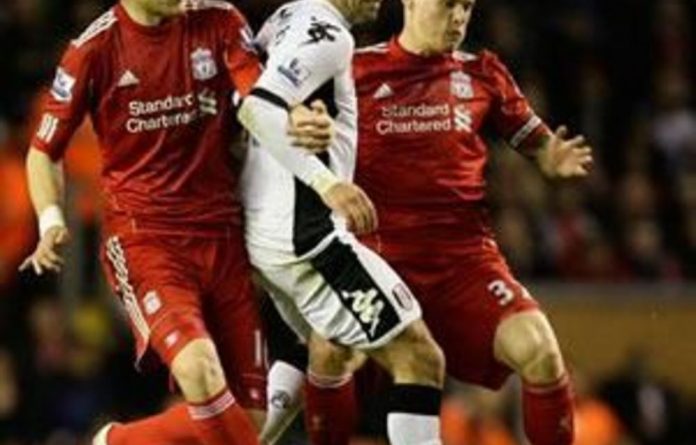 Liverpool’s hopes of taking a morale-boosting victory into the FA Cup final were dashed thanks to a 1-0 home loss to Fulham on Tuesday, improving Everton’s chances of finishing above their Merseyside rivals in the Premier League for the first time since 2005.

Martin Skrtel’s own goal in the fifth minute means Liverpool has won only five of 18 league matches at Anfield, a ground once seen as a fortress in the 18-time champions’ heyday.

With Saturday’s final against Chelsea at Wembley Stadium in mind, Liverpool manager Kenny Dalglish made nine changes to the team that beat Norwich 3-0 on Saturday and it showed as Fulham came away with a first topflight win at Anfield.

“The attitude and desire wasn’t there,” Dalglish said. “It wasn’t a good night for us, me included.”

A powerfully driven cross by John Arne Riise, a former Liverpool player, hit the standing leg of Skrtel and squirmed past goalkeeper Alexander Doni at the Kop end.

Liverpool dominated possession and chances, as usual at home, but lacked any real incisiveness without the rested Luis Suarez — who scored a sensational hat trick at Norwich — and captain Steven Gerrard.

Poor performance
Jonjo Shelvey had a shot cleared off the line for Liverpool, Andy Carroll headed a good opportunity wide and Dirk Kuyt volleyed just off target. The margin of defeat could have been worse for Liverpool, however, with substitute Karim Frei shooting against the post at the other end in the second half.

“I don’t think that can be described as a performance,” Dalglish said. “I thought it would be fair to give them an opportunity to get some minutes on the pitch with an important game on Saturday, but the performance and the attitude was very poor and that’s not like us.”

Liverpool has now picked up just one point from its past four home games, against Wigan, Aston Villa, West Bromwich Albion and Fulham — teams it would typically expect to beat.

Everton was denied victory at Britannia Stadium when striker Cameron Jerome scored in the 69th minute for Stoke, cancelling out Peter Crouch’s own goal a minute before halftime — the 1 000th goal in the Premier League this season.

Everton had scored four goals in each of its past three league games but was kept at bay by Stoke after Crouch had scored in his own net after an attempted clearance from Marc Wilson struck the lanky striker’s back.

Jerome levelled when he made a forward burst and held off two defenders before firing past goalkeeper Tim Howard.

Everton has games remaining at already-relegated Wolverhampton Wanderers and against Newcastle at home, while Liverpool hosts Chelsea before travelling to Swansea on the final day of the season. — Sapa-AP