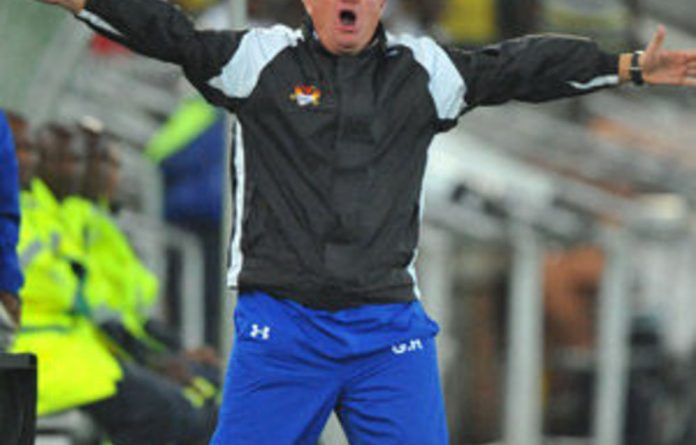 After going down to Orlando Pirates at the death on Tuesday night, with his side reduced to 10 men in the 75th minute, SuperSport United coach Gavin Hunt lashed out at the match officials.

Pirates captain Lucky Lekgwathi scored in second-half injury time to give Pirates a 2-1 win in Polokwane, sending the Buccaneers clear at the top of the standings, albeit temporarily with fellow title chasers Mamelodi Sundowns holding a midweek game in hand.

United were left four points behind the pacesetters with two matches left in the Premiership season.

“It was a shambolic display tonight, from I don’t have to tell you who,” Hunt said in an interview after the game … How they never got three red cards and we get a red card — it’s an absolute disgrace what went on here.”

Pirates had cleaned up with a 3-0 victory over SuperSport in Orlando in December, and Hunt said the former three-time champions had got the short end of the stick in both their matches against the title holders in this campaign.

“It’s amazing. We got the same officials we had in the first leg,” Hunt said.

“We should have had two blatant penalties in the first round which we didn’t get … It baffles me. I thought we had moved on from this.”

Advantage
Hunt’s men dominated from the start in a physical encounter, and when Edwin Gyimah was red-carded with 15 minutes left in the match, it handed the Buccaneers the advantage.

“There was only one team in the game tonight, and that was us,” Hunt said. “There was always going to be someone that was going to spoil it for us, and it happened.”

Hunt lauded his players and said they had responded well to the challenge.

“I’ve got to commend the players. They stood up to it and it’s worse than playing in the [Cup of African Nations] champions league … The players are so despondent because they were getting kicked left right and centre over the top of the ball.”

Hunt singled out Pirates striker Benni McCarthy as one player who went unpunished for foul play.

“Benni should’ve got sent off in the first half — over the top to Morgan [Gould] — but nothing happened,” he said.

“And [they] just get away with murder. What do you expect the players to do? … Eventually something’s got to give and we suffered at the end of the day … We were a much better side here tonight. We totally dominated and they never looked like scoring until they got the two goals.”

“I think we controlled the game from the beginning,” Palacios said.

“After we scored they equalised and we continued fighting.”

Elsewhere on Tuesday, Maritzburg United and AmaZulu played to a 1-1 draw in Pitermaritzburg. — Sapa