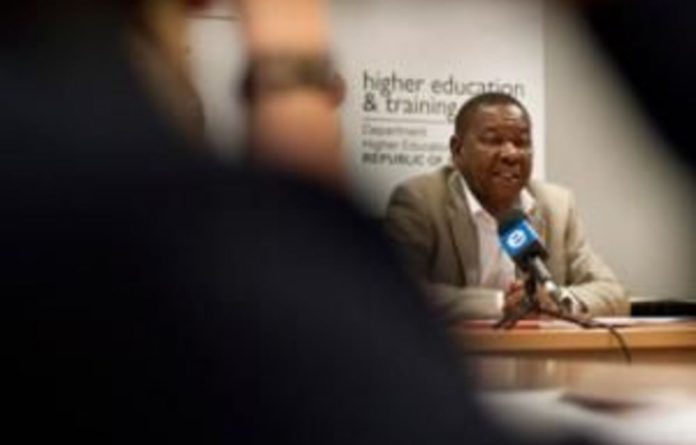 Following the order in which Nzimande presented the promises in the budget speech, which he delivered to Parliament with his trademark charisma and flair for detail on April 24:

The unexpected revelation was that the 23 universities had about R700-million from the state to help students who were woefully underprepared for academic study by low-quality schooling. It is a topic that spectacularly unites those who lecture to undergraduates.
Nzimande told Parliament about two kinds of this help: “An amount of R499-million has been allocated to universities for teaching development grants to assist in improving graduate outputs and R194-million for foundation programmes to improve the success rates of students from disadvantaged educational backgrounds,” he said.

How much will it help? Measured by the 50% of undergraduates who fail to complete their degrees, R693-million can barely scratch the surface of these needs.

Dividing the figure by 23 gives a crude indication of how far this money must stretch. We have to keep in mind also that an institution with about 10 000 students (the Central University of Technology, say) would not get as much of the R693-million as one with more than 300 000 (University of South Africa).

This is just one of the necessary factors that cut that pie unevenly: none of the “big five” should get anywhere near what each of the other 18 receive, for instance.

Put differently, the same pie needs to satisfy vegans, “meat and two veg” types and sweet tooths, among a lot of others.

Few lecturers of undergraduates will need such tools as dividing by 23; many have complained for years about being permanently on the brink of burnout. Not any of the units within universities whose task is development and foundation programmes will need any enlightenment either.

University lecturers are trained to be subject experts. Development and foundation experts are highly specialised too, if they have been trained appropriately. But how many have?

Universities have another bracing reality coming up soon: they will have to “amend their admission-requirement policies before the commencement of registrations for 2013”, Nzimande said the day before his budget speech.

“Some universities prefer not to take students from FET colleges,” he told a Gauteng conference on April 23, titled Strengthening Pathways between Colleges and Universities.

“Reports that we receive suggest that college graduates find it very difficult to be admitted to certificate, diploma or degree courses in universities, including universities of technology,” he said to a gathering that included colleges and universities. The Centre for Education Policy Development facilitated the conference.

But matriculants also find it difficult to gain entry. Between 75% and 85% of them every year for well more than a decade have never even been considered for access to first-year university because they did not achieve university entrance (“exemption”) matric passes.

University lecturers of undergraduates get the cream of that crop and official figures that first surfaced about six years ago show how they are faring: half are not completing their tertiary qualifications.

However, Nzimande did not mention matriculants in his speech to the Gauteng conference, where his chief subject was FET colleges and their students. Some universities show “prejudice” towards them, he said, a “state of affairs [that] is completely unacceptable”.

The politics that create a conundrum for all education sectors relates to the massive pressure now being exerted on the entire government, including Nzimande.

The ever-strategic minister alluded to this pressure once only, in a seemingly passing reference to his own “performance agreement with the president”. All Cabinet ministers now under Jacob Zuma have these and this was far from the first time Nzimande had mentioned his.

In terms of this agreement, he said, his department remained committed to increasing graduates in the sciences. But one sentence later he was telling Parliament about his own burning desire to perform emergency cardiac surgery on the country’s near-terminal humanities and social sciences at universities.

Leaving aside whether it is possible to do both — equally, now, in any nation’s economy — let us recall what ANC secretary general Gwede Mantashe reminded Nzimande of, very publicly, in March.

The higher education and training minister’s interests in rescuing the humanities had better not get in the way of the government’s commitment to mid-level skills development such as artisan training, Mantashe said (“Don’t drop the skills ball, Mantashe warns Nzimande”, Mail & Guardian Online, March 29).

How many of the new promises Nzimande made in his budget speech will he be able to ensure his department keeps? In brief: For how long will he be the department’s political head after the brilliant performance we can expect from him six months hence in Mangaung?