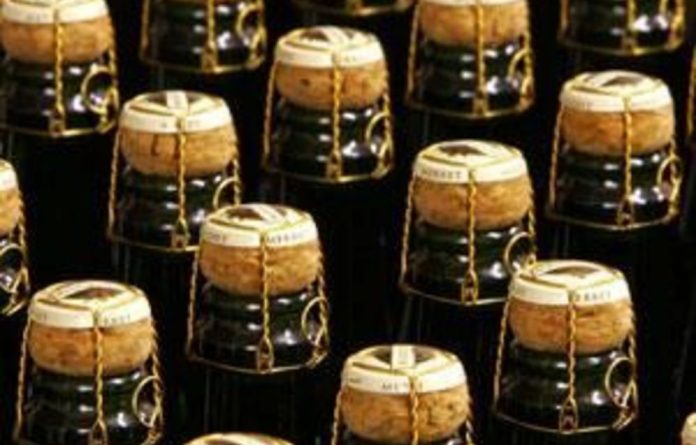 Not everyone quite gets sparkling wine. Including me, most of the time. What is it about bubbles that prompt so many people to forget that the wine containing them is often either acidic or insipid?

Not to mention, it is usually more expensive at all quality levels than the modest stuff without the bubbles.

No generic wine is more overpriced, surely, than champagne — the real stuff from France, I mean.

But let me not be too sour. There are some great champagnes and the occasional sublime one, such as Salon, but even aficionados seem contemptuous of big-volume famous brands such as the ordinary Moët and Veuve Clicquot, which are available at absurd prices, even in your local supermarket here at the foot of Africa.

There is good local sparkling wine too and it is holding up better in the current depressed market than most categories, judging by the way more and more estates are bringing out their own versions. There must be far more than 100 MCC labels — méthode cap classique, that is, the local indication that the carbon dioxide derives naturally from a second fermention in the bottle rather than being pumped in. And many are acceptable, at least. They are fresh and crisp, if not complex and deep like a few at the top end (Graham Beck Cuvée Clive, Simonsig Cuvée Royale and a few pricey others).

Cheerful association
Most people clearly want bubbles or, appreciatively or irritatedly, feel obliged to have sparkling wine to help them celebrate. That cheerful association is the brilliant achievement of long-time champagne marketing from which the rest of the bubbly-producing world now also benefits, if less lucratively.

Locally, by far the biggest brand is JC le Roux. In fact, it is apparently the biggest wine brand in all categories. Perhaps this security is what has kept it so mediocre in just about all its offerings, from the dry MCCs to the cloying carbonated stuff such as Le Domaine.

Some Distell brands have improved remarkably over the past decade or so, notably Nederburg and Fleur du Cap, but not so JC le Roux.

It is now easier to avoid this particular brand, even at the cheap end of the market, with — believe it or not –a range of imports by retailers Ultra Liquors. Not champagne of course, but French, probably from the deep south. Veuve de France is the brand — a clever allusion. But, said Mark Norrish, the Ultra man behind it all, Veuve Clicquot made only a token objection. There is a Brut (dry), a nicely copper-tinged Brut Rosé and a Demi-Sec (not quite dry but not too “girly”).

I was doubtful when I first heard of these, but after tasting them I realised that at R35 (or perhaps double that) there is no chance of doing better for your money in this genre. They are decent wines, fresh but soft and flavourful, and cheaper than any JC le Roux dross.

Norrish said he was troubled by patriotic thoughts when bringing them in, but perhaps it is a patriotic duty to show Distell what is possible and rescue South Africans from what the local ugly giant churns out.

If you are disturbed by drinking French, however, Ultra Liquors has more than adequate and well-priced local MCCs in its Table Bay (R55) and Secret Cellar ranges — a Brut and Blanc de Blanc in the latter, both retailing at R50. Something to celebrate and something with which to celebrate.