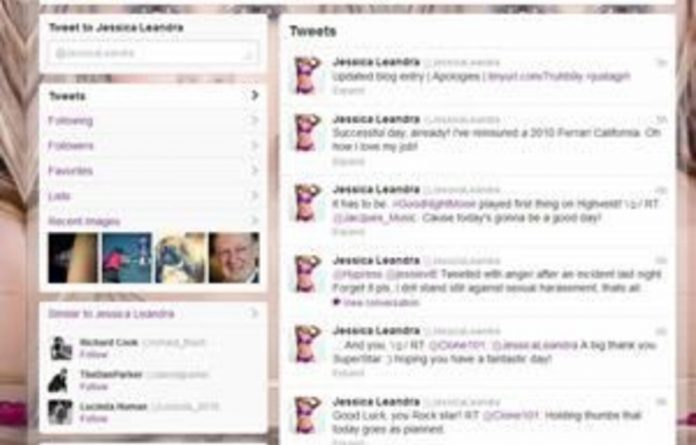 South Africans were seething on Twitter on Friday after a racist tweet by model Jessica Leandra made the rounds.

On Thursday evening, Leandra told her 2591 followers: “Just, well took on a an arrogant and disrespectful k***** inside Spar. Should have punched him, should have [sic].”

Leandra, who was men’s magazine FHM model of the year in 2011, has since deleted the controversial tweet and posted an apology on her blog jessicaleandra.com.

“I tweeted rather irresponsibly about an incident I encountered last night [Thursday], using a harsh and unkind word about the gentleman who had confronted me with sexual remarks and sounds,” she wrote in her apology.

“While most of you would enjoy the opportunity to throw a few vicious words at me, please do understand that I was acting in pure anger and frustration at the time and although we know this is no excuse, it is a lesson learnt and again, I am sincerely apologetic.”

“We’re horrified any1 would say such things! Those attitudes have no place in society or FHM! [sic].”

The magazine’s editor Brendan Cooper could not be immediately reached for comment.

Withdrawn sponsors
QuickTrim SA, one of her sponsors, tweeted: “Due to the severity of the remarks by #JessicaLeandra #QuickTrimSA herewith ends our sponsorship to her with immediate effect!”

Columnist Mabine Seabe wrote on the social networking site that he had lodged a complaint with the South African Human Rights Commission (SAHRC).

“I have lodged a complaint against Jessica Leandra with the Human Rights Commission on the basis of crimen injuria and libel. #DownWithRacism,” he wrote.

Another twitter user wrote: “Jessica Leandra has apologised on her blog. Darling, even if your mangling of language was acceptable, your disgusting racism is not.”

Another user tweeted: “Dear Jessica Leandra, deleting a tweet does not make you any less racist. You made the mistake of publicly announcing you are, deal with it.”

Another tweet read: “Sad to see this still happening in SA”.

“Dear Jessica, when your apology has excuses, it’s no longer an apology,” another tweet read.

By Friday afternoon Leandra was trending on Twitter. — Sapa

A study shows that the social messaging platform is both emancipatory and destructive, particularly during election campaigns
Read more
Opinion

These schools, to varying degrees, have an intense attachment to the values of authority and obedience — it is an attachment which numbs critical thought
Read more
Advertising
Continue to the category
Coronavirus