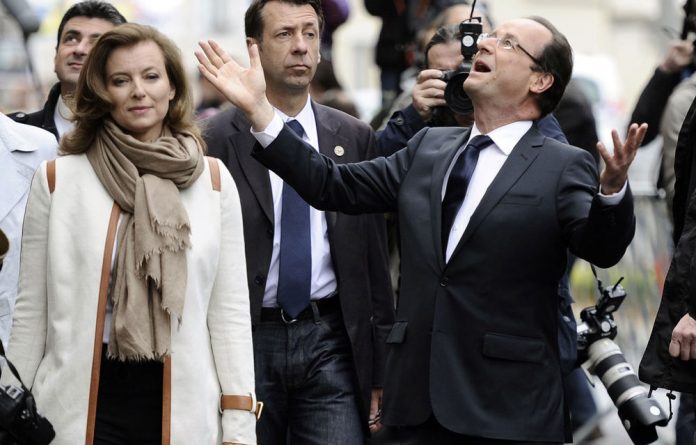 Buoyed by a tide of anger at Nicolas Sarkozy’s inability to rein in rampant unemployment during his five-year term, Hollande was between four and eight points ahead in final opinion polls for Sunday’s vote, which takes place alongside a Greek parliamentary election expected to punish leading parties for economic misery.

A wide margin of victory would give Hollande more authority to pursue his promise to push back a wave of unpopular German-inspired austerity in Europe, which brought hundreds of thousands of protestors onto the streets across the region last week, by refocusing on growth-orientated policies.

Hollande cast his vote for the presidential runoff in the central town of Tulle, where he was mayor for seven years, shaking hands and kissing voters, many of whom he knows personally. “I am confident. I am sure,” he told Reuters as he ate later in a local restaurant packed with Tulle residents.

Sarkozy was greeted by cheering crowds when he arrived to vote at a school in an up-market Paris neighbourhood close to the home of his wife Carla Bruni, a former supermodel. “We are going to win” chanted supporters as the conservative leader briefly clasped the hands of well-wishers.

With 46-million people registered to vote, polling stations opened at 8 am (6am GMT) and were due to close in most places at 6pm (4pm GMT). They shut two hours later in big cities.

Figures published by the interior ministry showed 30.7% of registered voters had cast their ballot by midday (10am GMT) despite wet weather in much of France, topping the 28.3% at the same stage of the first round on April 22.

Reliable projections of the result based on a partial count will be published once the last polling stations close. Media that publish exit polls or partial results in France before then risk fines and legal action.

Hollande, a mild-mannered career politician, has held a steady lead for weeks after outlining a comprehensive programme in January based on raising taxes, especially on high earners, to finance spending and keep the public deficit capped.

As much as his own programme, he is benefiting from anti-Sarkozy sentiment due to the incumbent’s brash personal style and to anger about the same economic gloom that has swept aside leaders from Britain to Portugal.

“It will be close, much closer than polls have shown,” said Moana de la Maisonneuve (41) a commodities sales manager who voted for Sarkozy but was pessimistic about his chances. “The tough thing for Sarkozy is that people are focusing on his personality, rather than his policies.”

Despite shaving a couple of points off Hollande’s lead in the last days of a frenetic campaign, Sarkozy’s own aides privately admit it would require a miracle for him to turn the odds in his favour and clinch a second term.

“I’d say he has one chance in six,” a member of Sarkozy’s inner circle told Reuters on condition of anonymity shortly before campaigning drew to a halt on Friday.

In Paris’s Bastille square, a flashpoint of the 1789 French Revolution and the Socialists’ traditional gathering point for electoral celebrations, crowd barriers were already laid out in anticipation of an Hollande victory.

“Both Sarkozy and Hollande would be capable managers of the French economy but Sarkozy has created too much discord … That is why I voted Hollande,” said photographer Gilles Leimdorfer.

In Greece, where angry voters were expected to punish mainstream parties for supporting IMF-backed austerity, French overseas voters voiced hope that a Hollande victory would temper Germany’s drive for budgetary discipline which many say is driving a number of euro zone countries into recession.

“Enough is enough. There is too much austerity,” 72-year-old Maria said, voting for Hollande at the consulate in Athens.

Sarkozy launched his campaign late and swerved hard to the right as he tried to win back low-income voters that polls show have ditched him for either the radical left or extreme right.

His aggressive rallies and promises to rein in immigrant numbers, crack down on tax exiles and make the unemployed retrain as a condition of getting benefits did not reduce Hollande’s lead. Sarkozy surprised many by failing to land a knockout punch on his rival in a televised debate.

In two further blows in the last days of the race, far-right leader Marine Le Pen, who came third in the first round with 17.9%, and centrist Francois Bayrou, who came fifth with 9.1%, refused to endorse Sarkozy.

The election comes at a crucial time for the euro zone as France, Europe’s number two economy, is a vital partner for Berlin in safeguarding the single currency bloc’s future.

If Hollande is elected, joining a minority of left-wing governments in Europe, he wants to renegotiate a budget discipline treaty signed by 25 EU leaders in March. Berlin has made the pact a pre-condition of aid for struggling states.

The Socialist plans to visit centre-right Chancellor Angela Merkel within days of the election to discuss his ideas.

German relations aside, France is grappling with feeble growth and 10% unemployment, a gaping trade deficit and high state spending that is straining public finances and was a factor in Standard & Poor’s removing its triple-A credit rating.

While financial markets are warming to Hollande’s growth agenda, given growing support for it elsewhere in Europe, he would need to reassure them quickly about his economic plans as fears resurface over the eurozone’s debt woes.

French 10-year bond yields fell to 2.87% on Friday, a level not seen since early October. Yet French debt could remain vulnerable to selling pressure, as markets and credit rating agencies wait to be convinced of his fiscal credentials.

While economists want Hollande to trim over-optimistic growth forecasts and impose spending cuts, political analysts fear this would be difficult with left-wing voters hoping he will raise the minimum wage and reverse a recent sales-tax rise.

Little known outside France, Hollande would soon have his diplomatic skills tested if he wins, with a Chicago Nato summit due in late May and a Group of 20 summit in Mexico in late June. The former Socialist Party chief has never held a ministerial post.

“He can take the commitment he has shown here to France. I know he can,” said Madame Champeil (73) a retired postal worker in Tulle, adding with tears in her eyes: “The worst thing about this election is sadly, if he wins, we won’t see him anymore.” — Reuters

French court rules Sarkozy should be tried over campaign funding

Women’s unpaid work must be included in GDP calculations: Lessons from history

Itâ€™s not all black and white