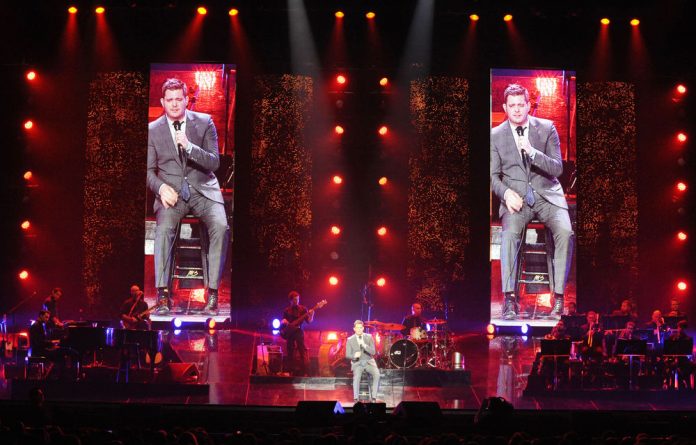 Part of the joy of going to a concert is losing yourself in the music. Sometimes it’s great to just throw away your inhibitions and act like a 12-year-old girl at a Justin Bieber concert. Not being a Bieber fan myself, the Michael Buble concert at Sun City provided the perfect setting to let loose and go crazy. I had to beg, borrow and plead to get tickets for the concert — I wasn’t going to let the opportunity pass me by.

Buble broke with tradition and brought his own opening act, the New York band, Naturally 7. The group had the crowd on its feet with their mix of a capella, beat boxing and R&B, which they like to call vocal play.

The Sunday night concert was the last in Buble’s Crazy Love tour which has taken him across six continents and seen him perform 182 shows over two years. His local shows were always going to be sold out with his record company claiming him as the biggest selling male artist in South Africa at the moment.

During his performance, Buble said it was important to him that the tour ended in South Africa because it was one of the first markets, outside of North America, where he had become a success.

We found our seats near the stage and halfway through his set he moved to a secondary stage at the back of the auditorium. We went from standing on our chairs ? to get a better view ? to being in the front row. After he returned to the main stage, a security guard ? apparently concerned for our safety because he thought we were a bit too excited ? escorted us to the front of the arena where we spent the rest of the concert screaming our heads off as Buble belted out hit after hit.

For the die-hard fans there was plenty to get excited about, including fantastic renditions of Cry Me a River and All of Me from his album Crazy Love, as well as other favourites such as Everything, Home and Haven’t Met You Yet.

Buble paid tribute to Michael Jackson with a cover of Billy Jeanand included some amusing anecdotes of how he, as a teenager, could never make out the words in Jackson’s songs and so used to sing rather mangled versions of the hits.

Although a seated concert, Buble told the crowd to let loose and, while there was no underwear thrown on stage, the audience got into the mood of the evening and we weren’t the only ones channeling our 12-year-old selves.

This concert may have heralded the end of this tour but Buble promised this visit would not be his last to South Africa.