What? You can’t cook doro wot? 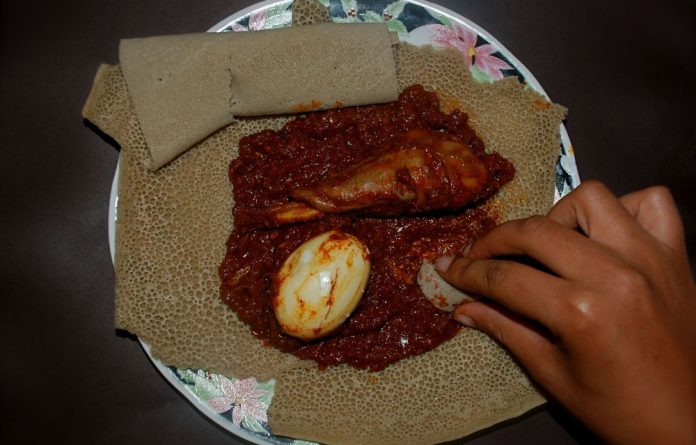 “You will never find a husband if you cannot cook doro wot!”

My godmother has told me once too often. And she is not alone in this belief. My favourite taxi driver looked appalled when he overheard me telling a friend that I can’t cook any Ethiopian dish. He claims he chose his wife on her doro wot skills.
And even my flatmate, judged by some for his western lifestyle, told his girlfriend he cannot marry her as long as she doesn’t know how to cook doro wot.

Doro wot is a traditional Ethiopian feast meal eaten after the two months of fasting by the large Orthodox community in Ethiopia. Doro means chicken, and wot is a sort of curry. It’s my favourite meal from the Ethiopian kitchen. The fasting is completed at Easter, which is one week later than the rest of the world because of the Ethiopian calendar.

It takes the whole day to make doro wot. With my objection towards cooking, I’ve always avoided the kitchen as much as possible. While living in Europe I was thankful for the great variety of ready-made microwave meals. But back home in Ethiopia, I am often reminded that a woman should know how to cook. Or, as one friend explained to me: “If you can’t make doro wot, your man will eat it somewhere else. And no woman is going to let a man go just like that after cooking a dish for him that takes all day.”

I have never dreamt of getting married, but still I find myself in Mrs Genet Seifu’s kitchen to learn the secrets of this traditionally revered meal. Because who could be a better mentor than Mrs Seifu, the former chef and owner of the famous Piasa restaurant in London?

In the days before Easter, many people in Addis Ababa are seen walking down the street with one or two chickens that are held upside down by the legs. “The price for chickens has gone up spectacularly over the last years,” tells Mrs Seifu, “I paid 200 birr for this one. That is almost ten times as much as seven years ago.”

She explains that, besides the chicken, three kilograms of onions are needed, spiced butter, berbere spices, and seven eggs. I tell her that this sounds easy,  and she laughs at me and reminds me of the importance of every detail, as even chopping the onions needs to be done as finely and precisely as possible, since the wot consists mostly of onions. Mrs Seifu shows me the chopping machine she uses nowadays and says: ‘I’ve been cutting hundreds of kilos of onions in my life. Even when it makes you cry, you have to continue cutting.”

The first steps of making doro wot seem easy; the machine cuts the onions while the eggs are boiled on the stove. The onions are then fried in the pan for up to two hours. The onions are being stirred over and over again. After an hour small amounts of berbere spices are added with some spiced butter and a bit of water. This routine continues for at least another hour.

Traditionally, the chicken is killed at 6pm on the day before Easter. Only men that have been fasting are allowed to cut the throat of the chicken. Killing the chicken goes quickly. Although I find it awful to look at, my desire for doro wot is so great that I can’t feel sorry for the chicken.

“I started watching my mother in the kitchen from the age of seven. Only by the time I was thirteen could I prepare it myself,” says Mrs Seifu as she plucks the feathers from the dead chicken that will give us seven good pieces of meat: two legs, breast and thighs, and the back. The wings, neck and kidney’s will also be mixed into the wot.

Once the chicken is naked and the head is cut off, she starts blowing through the chicken’s neck to make the skin puff up, something I can’t imagine myself doing as I see the blood around her mouth. She then holds the chicken above a fire to burn of all the remaining hair and dirt. The cleaning process is very important to Mrs Seifu and she takes her time to wash the naked chicken over and over again after removing its skin.

Then the chicken is cut into pieces.“I feel like a scientist whenever I’m cutting up the chicken, it has to be done very precisely. Watch closely because you can’t learn this from the Internet.”

While the chicken pieces are resting in water with lemon and salt for another hour, Mrs Seifu shows me the wot, which has now turned dark brown. “As you can see, the wot is not very watery. Thick sauce is better as it is tastier. When your sauce has too much water, you did not do a good job.”

There is no specific amount of water, butter or spices for the recipe. “A good cook just knows,” says Mrs Seifu, which makes me wonder if my doro wot will ever turn out like hers if I have to try it on my own.

When the wot is just right, the chicken is added and is left to simmer for one and a half hours. Mrs Seifu recommends that one chooses young chickens, as the older ones take longer to cook. “I prefer the younger ones. So when you go out to buy the chicken, closely check the fifth nail. The bigger that nail is, the older the chicken.”

After all the work, I am craving the freshly made Doro wot. The smell is permeating the compound. In fact, most of Addis Ababa seems to smell of it. But I have to be patient, as it is tradition to only eat it after a four-hour midnight church service.

And although Mrs Seifu has done most of the work, I will tell people I made doro wot.

Just so I can be seen as a real Ethiopian woman.

Ethiopia gets its injera back

Immigrants flavour their pockets of the city in a way that the sterile suburbs fail to.
Read more
National

Just because you build it, it doesn't mean they will come. But Arts on Main in downtown Jo'burg is drawing the crowds every weekend.
Read more
Advertising
Continue to the category
Politics