Curiosity on target for ‘eye of the needle’ Mars landing 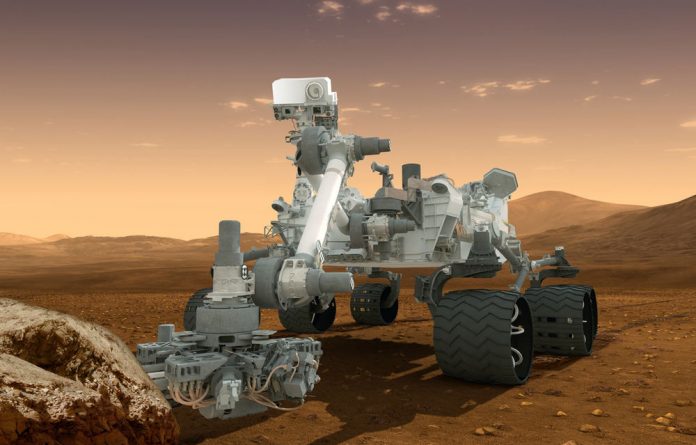 The Mars rover Curiosity, on a quest for signs the Red Planet once hosted the building blocks of life, streaked into the home stretch of its eight-month voyage on Sunday nearing a make-or-break landing attempt Nasa calls its most challenging date.

Curiosity, the first full-fledged mobile science laboratory ever sent to a distant world, was scheduled to touch down inside a vast, ancient impact crater on Sunday at 5.31am GMT on Monday.

Mission control engineers at the Jet Propulsion Laboratory near Los Angeles acknowledge that delivering the one-tonne, six-wheeled, nuclear-powered vehicle in one piece is a highly risky proposition, with zero margin for error.

But on the eve of Curiosity's rendezvous with Mars, JPL's team said the spacecraft and its systems were functioning flawlessly, and forecasts called for favourable Martian weather over the landing zone.

After a journey from Earth of more than 567-million kilometres, engineers said they were hopeful the rover, the size of a small sports car, will land precisely as planned near the foot of a tall mountain rising from the floor of Gale Crater in Mars' southern hemisphere.

Flight controllers anticipate clear and calm conditions for touchdown, slated to occur in the Martian late afternoon. There may be some haze in the planet's pink skies from ice clouds, typical for this time of year, with temperatures at about -12C.

"We're on target to fly through the eye of the needle," Arthur Amador, the Mars Science Laboratory mission manager, told reporters at a briefing on Saturday, as Curiosity hurtled to within 4.5-million kilometres of its destination.

Facing deep cuts in its science budget and struggling to regain its footing after cancellation of the space shuttle programme — Nasa's centerpiece for 30 years — the agency has much at stake in the outcome of the $2.5-billion mission.

Mars is the chief component of Nasa's long-term deep space exploration plans. Curiosity, the space agency's first astrobiology mission since the 1970s-era Viking probes, is designed primarily to search for evidence that the planet most similar to Earth may have once have harbored ingredients necessary for microbial life to evolve.

The rover, formally called the Mars Science Lab, is equipped with an array of sophisticated chemistry and geology instruments capable of analysing samples of soil, rocks and atmosphere on the spot and beaming results back to scientists on Earth.

Nearing the end of its journey encased in a capsule-like shell, Curiosity was essentially flying on automatic pilot, guided by a computer packed with pre-programmed instructions.

Mission control was due to activate the craft's backup computer on Sunday, ensuring that it will assume onboard command of the vessel should the primary computer fail during entry into the Martian atmosphere and its tricky descent to the surface.

Two hours before atmospheric entry, mission control will send its very last transmission to Curiosity, a "parameter update" giving the craft its exact position in space.

After that, controllers will have little to do but anxiously track Curiosity's progress as it flies into Mars' upper atmosphere at 20 921kph, 17 times the speed of sound, and begins a descent and landing sequence Nasa refers to as "the seven minutes of terror".

Curiosity's fate will then hinge on a complex series of maneouvers that include a giant parachute deployment and a never-before-used jet-powered "sky crane" that must descend to the right spot over the planet, lower the rover to the ground on nylon tethers, cut the cords and fly away.

If everything works according to plan, controllers at JPL will know within a minute or two that the Curiosity is safely on the ground, alerted by a terse radio transmission relayed to Earth from the Mars orbiter Odyssey flying overhead.

If no landing signal comes, it could take hours or days for scientists to learn if radio communications with the rover were merely disrupted or that it crashed or burned up during descent.

From 248-million kilometres away, 1 400 scientists, engineers and guests are expected to tensely wait at JPL to learn Curiosity's fate. Another 5 000 people will be watching from the nearby California Institute of Technology, the academic home of JPL.

A Nasa Television broadcast from mission control will take over the giant Toshiba screens in Times Square in New York City.

In a good-luck tradition dating back to the 1970s, engineers in the control room at JPL plan to break out cans of roasted peanuts about an hour before landing